Smyrna, DE – For the first time in two years, the 35th Annual Darley Awards, presented by the Arabian Racing Cup (ARC) and sponsored by the Texas Arabian Breeders Association, invited guests to an in-person live event celebrating the top individuals and horses in the sport of Arabian racing in the United States on Saturday evening, 19 March 2022, at Sam Houston Race Park just outside Houston, Texas. 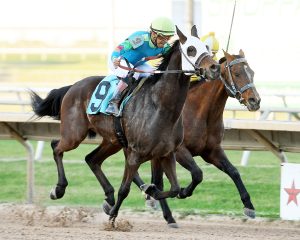 The $30,000 Darley Sprint (G3) kicked off the evening’s festivities with a dramatic renewal as Like Moulin Rouge crossed the finish line first but was disqualified by the stewards from first to third for interference caused against Quick Sand AA at the top of the stretch. Paddys Day was promoted the winner, the 31st career victory and 23rd stake win for the 11-year-old in 54 lifetime starts under jockey Stewart Elliott for trainer Rhonda Tuley and owner Jane R. Teutsch.

Hosted by ARC Chief Steward, Jon Henningsgard, guests enjoyed the anticipated reveal of each Darley Champion for the 2021 racing year.

The ARC extends its congratulations, once again, to the following Darley Award winners of the 2021 racing year: 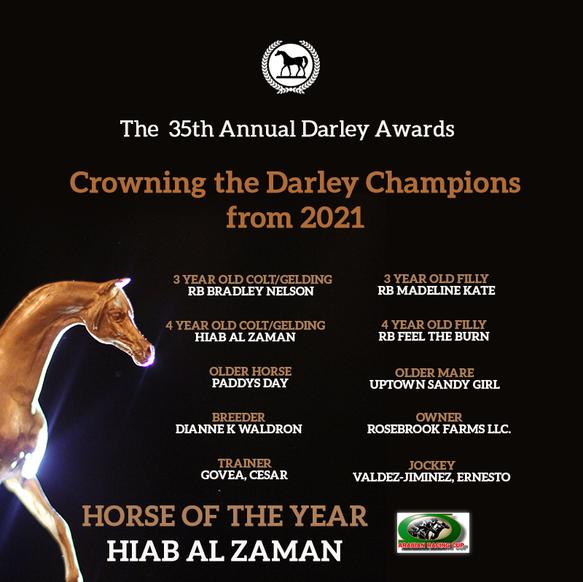 This year’s Horse of the Year Category was comprised of monumental talent. The nominees included:

But the nod went to the towering four-year-old chestnut colt, Hiab Al Zaman (Hilal Al Zaman x My Shelby Cobra, by Kaolino), the first homebred Darley Horse of the Year for James & Susan Meyer of Meyercrest Arabians in Raleigh, North Carolina. The Meyers have been boutique breeders of Arabian racehorses since 2008, with their very first race foal, Born to Boogie MC, going on to be named Darley Champion 3 Year Old Colt/Gelding in 2011. Hiab Al Zaman’s two Darley Championships this year – Darley 4 Year Old Colt/Gelding and Darley Horse of the Year – brought their homebred Darley winners up to three. Susan was emotional talking about the win for her and her husband’s talented colt.

“To have a Horse of the Year is just incredible,” said Meyer. “I never really thought we would attain this, as we only breed 1-2 foals each year. It really has been a team effort. Dr. Nujaifi (of Al Nujaifi Racing, owner of Hiab’s sire, Hilal Al Zaman) and Val Bunting were wonderful. And I credit a lot of his success to our trainers, Cristian and Jeremy Castro, who tailor their training to each horse and were able to translate Hiab’s high energy and competitive nature to stay bright, interested, and powerful on the track. Hiab would not have fit in a cookie cutter program, and I can’t thank them enough. But mostly, we are grateful to Hiab… a horse that reminds us every day to keep fighting, keep hoping, keep dreaming.”

The life of the imposing chestnut colt – now 16h and still growing – didn’t begin with the same certainty. A few hours after foaling, the weanling colt fractured his sinus cavity and sustained a serious concussion, likely resulting from a stumble on his gangly legs. Walking to the left would cause Hiab to flip over backwards and immediately seizure. So, the determined little colt walked to the right… around and around incessantly. Fortunately, Susan’s husband, Jim, is a large-animal veterinarian, allowing them to discover and treat it within an hour. Susan, Jim, and a small army of helpers stayed by the colt’s side for over six weeks. 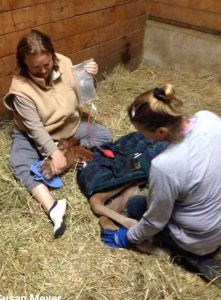 “We had to milk the mare, then squirt it into his mouth with a syringe. We did this around the clock, often while he walked in his righthand circles. Eventually, as the brain swelling decreased, Hiab was able to nurse on his own by wisely propping himself up on his mother while he nursed. At some point, when he was ready to go outside, I brought my lawn chair out to the middle of his paddock so that when Hiab would flip over and have a seizure, I could help him up. We assumed he’d never be fully functional and would probably end up as our pasture ornament. But we never gave up, and neither did he.”

Hiab Al Zaman steadily improved. Around the sixth week – and to the amazement of all those around him – Hiab had made nearly a full recovery. He continued growing up at Meyercrest Arabians and was moved to the care of Cristian and Jeremy’s Castro Racing Stables at the end of his three-year-old year. The first big race of his career? Pimlico’s $100,000 UAE President Cup (G1) on Preakness Day… the most lucrative race for Arabians in the United States.

“We knew we needed at last one prep race under him before that big race,” said Susan, “So we sent him to Texas.” On their 28-hour cross-country haul, the team drove through horrific storms, even imminent tornadoes. To no one’s surprise, Hiab got sick after his arrival. With only two weeks before his prep race, Hiab recovered to a degree, but ran the first race of his career at less than 100% health. And he still ended up third. His jockey told Sue and Jim, “This horse ran this race on talent and heart alone. He would not give up. He’s special.”

Hiab continued on to the UAE President Cup (G1), where even after a bad stumble out of the gate during only his second lifetime start, he came in 5th out of twelve of the nation’s best. And as his campaign continued in Texas, Hiab Al Zaman’s wins began to rack up. At the end of 2021, Hiab Al Zaman’s talent – backed by his impressive stats – remained unarguable.

“He learned during every race,” Sue remarked, “and got more professional each time. He’s so smart and willing, with loads of talent. He’s a fighter.” 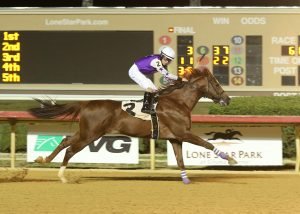 The only USA son of Hilal Al Zaman, Hiab Al Zaman was recognized with the ultimate achievement: 2021 Darley Horse of the Year. At just four years old, Hiab is only beginning his career. The Meyers plan to run him at the 2022 UAE President Cup (G1) again in May, and then will consider all options after that, including a possible overseas campaign.

The popular breeding auction consistently raises significant funding that goes to support the ongoing programs of the Arabian Racing Cup, including the ARC Breeders Incentive Program and the Darley Awards. It was the ideal conclusion to wrap up an exciting Darley Awards day, celebrated by Arabian racing enthusiasts throughout North America, Europe, and the Middle East.

“There isn’t a grander celebration of the Arabian racehorse and its people than the Darley Awards, and this year was no exception,” said Jon Henningsgard, Chief Steward of the USA Darley Awards’ Arabian Racing Cup (ARC) and owner of Uptown Arabians located just outside Houston, Texas. “It was great to be back in person and enjoy an evening full of inspiration, fun, excitement, and renewed passion that came from reliving moments and being reminded why we do what we do, regardless of winning a Darley award, or not. It’s what we strive to do.”

The 36th Annual Darley Awards will return to Houston in 2023.