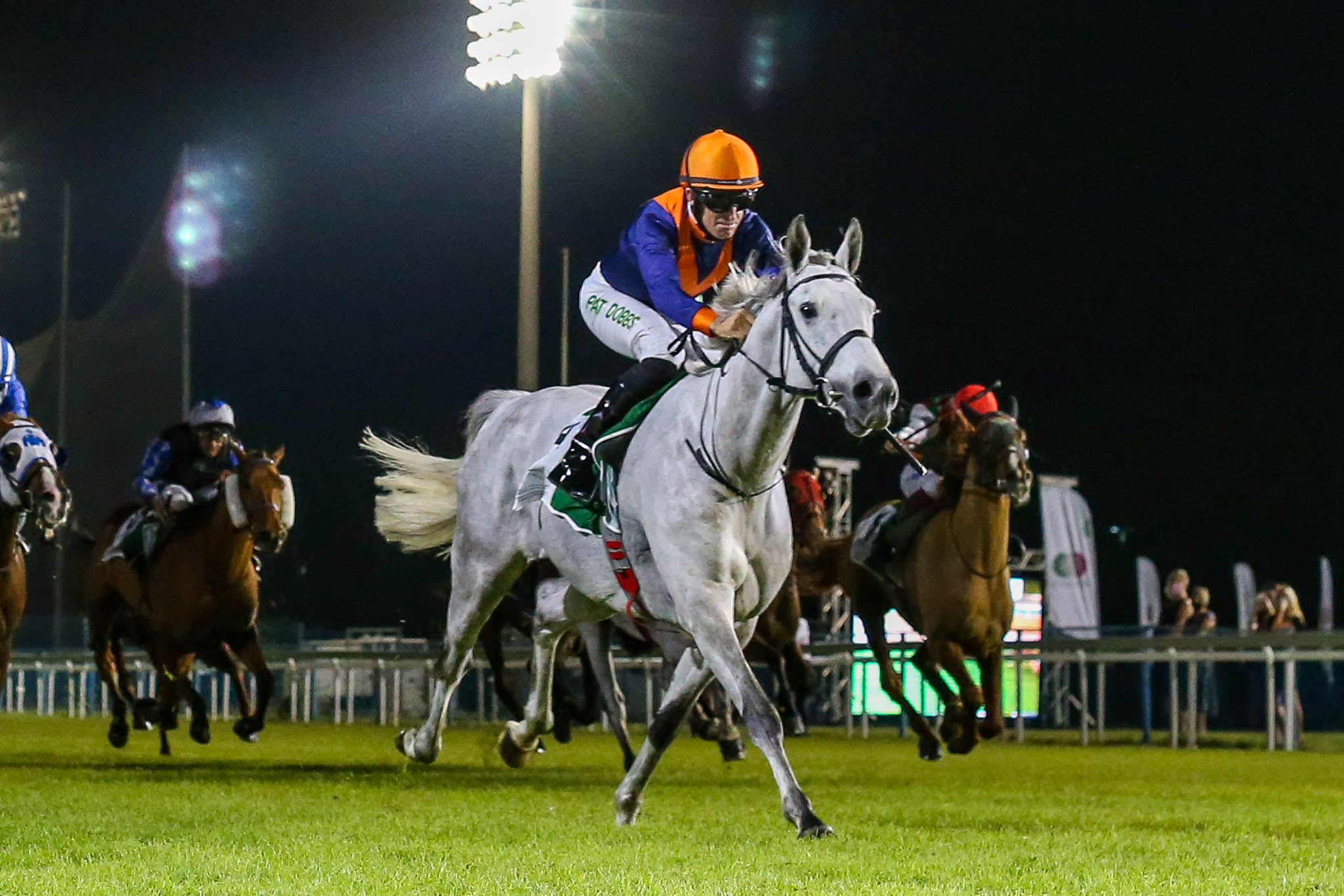 Friday, 4 December 2020, Abu Dhabi, UAE ~ Turf racing at Abu Dhabi on Friday, 4 December was highlighted by the most valuable race to be staged in the capital all season, the 2200m Group 1 Sheikh Zayed bin Sultan Al Nahyan Jewel Crown and the valuable prize went to Belgium courtesy of Messi.

Previously contested over 1600m, but increased 600m in distance this year, the new trip certainly suited the winner under a very polished and confident ride from Pat Dobbs. Sixteen may have gone to post, but very few managed to get seriously involved, Dobbs settling his mount in behind leader RB Frynchh Dude. When that rival came under pressure, Dobbs committed for home with about 275m remaining and the result was sealed in a matter of strides. Remarkably, the 8-year-old Messi is the only horse in training for trainer Timo Keersmaekers and is homebred, as well as owned, by his family.

This was his seventh career win, fifth on turf, but his first at Group One level and a delighted Keersmaekers said: “That was brilliant! The horse has been in such good form all year and had been working well, so we were hopeful.

“Pat Dobbs has given him the perfect ride and I must thank Adrie de Vries for recommending Pat when it was clear he could not take the ride. My wife is here with our young daughter which makes it extra special.”

Dobbs added: “I was always traveling strongly, though he was a bit on and off the bit until he saw real daylight. Then when he quickened, I knew it would take a really good one to get past us and nobody was able to challenge us.

“He is clearly a very good Purebred Arabian and it is amazing to win such a prize in one of the world’s biggest Arabian races.”

The main support race, one of four on the card over 1600m, was the Group 3 Sheikh Zayed bin Sultan Al Nahyan National Day Cup was won impressively by AF Alwajel, confidently ridden by Tadhg O’Shea in the colours of his main employer, Khalid Khalifa Al Nabooda for the owner’s principal trainer Ernst Oertel. Several of the 15 runners threatened at some stage in the straight, but once O’Shea pressed go on the winner, they dashed to the front with about 250m remaining and never looked in any danger. The 5-year-old homebred entire shrugging off a penalty and making it win number five on just his tenth start. He earned his penalty with success in the 1400m Liwa Oasis on his previous visit to the capital, at the beginning of March.

Al Nabooda said: “As an Emirati owner and breeder this is one race I have always wanted to win. Now I have and I am so proud.”

O’Shea added: “What a horse, what a trainer. It is a great result for everyone, especially the owner and this horse had quite a hard race on dirt at Meydan just a fortnight ago, so a lot of credit has to go to Ernst and his team for bringing him here in such great shape.”

Also over 1600m, the Thoroughbred equivalent carries Listed status and produced an absolute thriller with the lead changing hands several times over the final 300m when early leader, Wasim, was passed by Yaalail. His advantage barely lasted 50m before Medahim took over under Richard Mullen and remained in front until the very final strides when Ryan Curatolo delivered Boerhan with a perfectly timed challenge. They were virtually last entering the short home straight, but ahead of Mailshot who also finished fast and late, snatching third with the first three crossing the line in unison.

Restricted to 3-year-olds, the opening 1600m HH Sheikh Mansoor bin Zayed Al Nahyan Racing Festival Purebred Arabian Cup, a conditions contest, was won stylishly by Hameen, who shot clear in the final 200m under Adrie de Vries. After a tardy start, the colt raced in about tenth of the 13 runners before making good progress on the home turn when briefly short of room. Once De Vries found racing room, his mount quickened to the front and had the race in safekeeping as soon as he hit the front. Saddled by Abdallah Al Hammadi for his main patron, Al Ajban Stables, the colt had won his only previous start, a 1600m maiden on the dirt at Al Ain, five weeks ago. He was chased home by stable companion and the same owner’s Ottoman to complete a memorable result for connections.

De Vries said: “We did not break too well, so I had to niggle him early on, but he is a bonny little horse who carried me into the race strongly.

“I had to wait for a gap, but when it appeared he picked up very nicely and was a good performance.”

Just 30 minutes later owner and trainer were celebrating a double, this time combining with Connor Beasley who was also aboard Ottoman, when Winked led close home to take the HH Sheikha Fatima bint Mubarak Cup, also a conditions race over 1600m, but for fillies and mares.

Top weight RB Money To Burn looked the likely winner entering the short straight, but seemingly tiring, she hung left towards the standside under Fabice Veron, initially forfeiting the lead to Hakeemat Muscat about 150m out. Veron’s mount tried to fight back but eventually had to settle for third behind Hakeemat Muscat in what was virtually a triple photo finish. Meanwhile, after a slow start, Beasley crept Winked into contention on the bend and his 4-year-old filly finished powerfully, leading in the closing stages to register a hard fought victory, her second career success after just five outings.

“I won a 1600m maiden at Al Ain on dirt on this filly,” Beasley said. “We were probably never headed that day, but this evening she half missed the break and I have had to be patient. She has finished the race very strongly and I was able to glance across so was pretty confident we had won.”

Beasley was also reunited with an old friend to land the concluding 1400m handicap for horses in private ownership, producing AF Alareeq to lead in the closing stages. The pair landed a 1600m maiden in the capital in March for trainer Ahmed Al Mehairbi and owner Saif Asheer Ali Sulaiman Al Mazrouei.