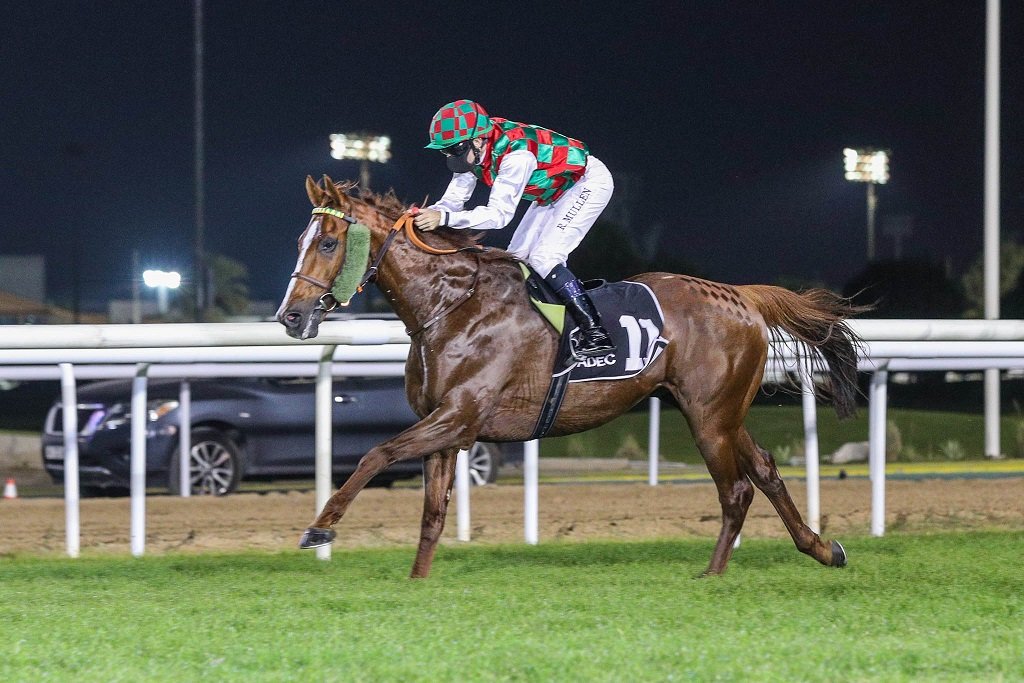 2 December 2020, Abu Dhabi, UAE ~ One of the richest Purebred Arabians races in the world will go off on Friday, 4 December, at the Abu Dhabi Equestrian Club in Abu Dhabi. The renewal of the Group 1 $1.35 million (AED 5 million) Sheikh Zayed bin Sultan Al Nahyan Jewel Crown will field 16 contenders that will race over 2200m and represent some of the top Arabian racing stallions of our time.

Out of post position 1 is AF Al Bairaq by AF Al Buraq, and is owned by the strong local talent of Khalid Khalifa Al Nabooda and team. In his latest race, he came second to Somoud, the winner of the Prep race in November.

Post position 2 is Al Zahir by Madjani for the stable of HH Sh Hamdan bin Rashid Al Maktoum. He has raced over this course and distance this year but has not raced since March.

Post position 3 is BF Mughader by Falak representing Alwarith Ibrahim Al Hadrami. He came third to Somoud in March over this course and distance with a fifth place to Somoud’s win in the November Prep race.

Post position 4 is Darius Du Paon by No Risk Al Maury is owned by the HH Sh Khalifa bin Zayed Al Nahyan stables. A talented horse that has not raced since March of this year.

Post position 5 is the US-bred Goshawke by Thoroughbred and a Burning Sand mare, and is owned by The Al Ajban Stables in the UAE.

Post position 7 is Harrab by Bibi De Carrere and owned by Al Wathba Racing. He ran fourth to Somoud in the November Prep race.

Post 8 will hold Hayyan, a talented Munjiz colt rated at 121 and owned by Yas Horse Racing Management. He has mainly raced on the Continent in 2020.

Post 9 holds Messi by Dahess, named for the famous Argentinian footballer. He is trained in Europe and owned by Vido Keersmakers from Belgium. His rating of 123 is the highest in this race, and he has narrowly been defeated in Gr 1 wins – in the Qatar Arabian World Cup in October by Tayf, and in the ParisLongchamps Qatar Prix Dragon in September by Fazza Al Khaleidah.

Number 11 post position is another Saudi based horse, Mutwakel Al Khalediah by the same sire as number 10, and at four years, one of the youngest in the race. He is owned by Sons of Prince Khaled bin Sultan Al Saud, and stepping up in distance.

Number 12 post position is Rasi by Mared Al Sahra crossed with a US female side owned by Musallam Ali Said Qatan.

Post Position 13 sends out the US-bred RB Frynchh Dude, a four-year-old by Baseq Al Kalediah and owned by Byerley Racing. This will be the colt’s second race in the UAE, placing fourth to Somoud in the November Prep race.

One to watch at post 14 is Somoud, the 6 year old Munjiz son owned by Yas Racing, with four wins out of five starts this year. Only a month ago he won the Sheikh bin Sultan Al Nayan Jewel Crown Prep over this course and distance in the time of 02:29:80 and he is rated at 119.

In Post position 16 Jaazmah Athbah by Jalnar Al Khalidiah is owned by Athba Racing and has raced in France, and did win his last race, a 2000m Gr 2 in September on turf in Milan.

Time will tell if the winter season for the European horses will be harder to overcome than the locally trained horses accustomed to the climate that are just starting to race their season.