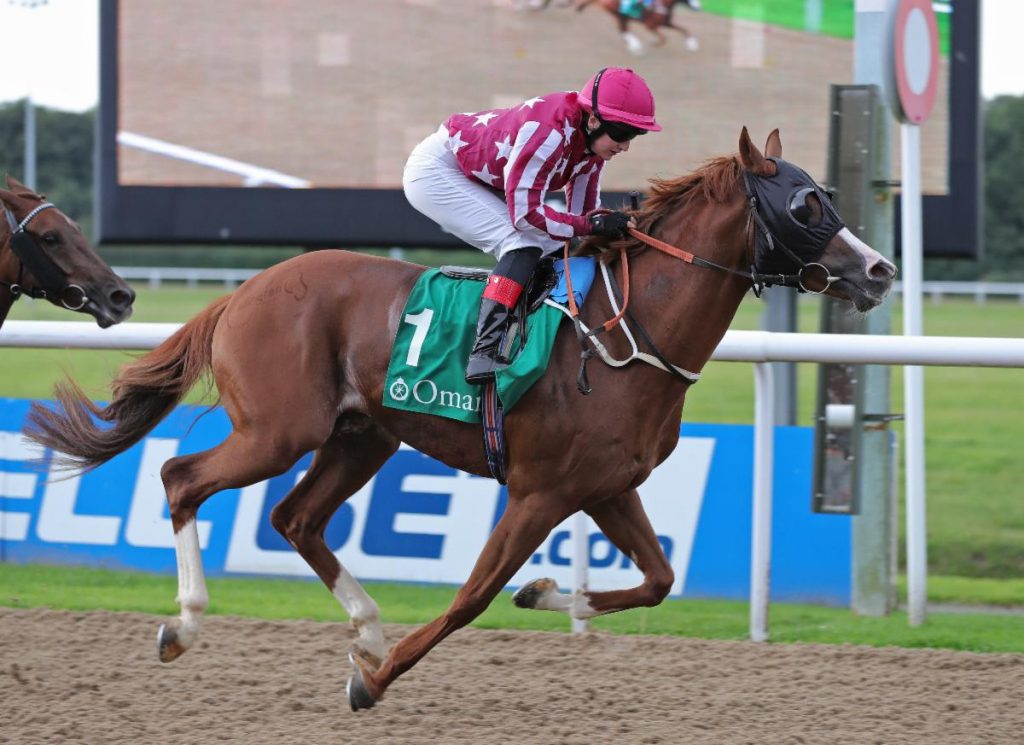 18 September 2021, Wolverhampton, Uk ~ The Arabian Racing Organisation (ARO) welcomed AJS Hajaj into the winner’s enclosure at Wolverhampton with his win on 18 September 2021 providing his owner Mohammed bin Hamad Khalifa Al Attiyah with his first UK winner with an Arabian. The three-year-old colt was having only his second start and won well by a length and a quarter from Balqees, with Paramer Angel a further three lengths behind in third.

It was also a first Arabian winner for jockey Josephine Gordon, who commented: “Phil’s been very good to me, I’ve been really lucky with the ones I’ve ridden for him, they’ve all been competitive. I’m still learning a lot about them as they’re different to thoroughbreds. Plan A did not work out, as I was supposed to be up with the pace, he’s still a little bit green and I knew that he would stay further, so I knew I would have to swoop and loop at some point, which is not really ideal, as there were already horses three wide.

“AJA Hajaj is obviously a very nice horse, you don’t see many Arabians sprint home like that. He going to keep improving because he definitely doesn’t know his job yet.”

SOHAR BEACH HANDICAP STAKES 0-75
Trainer Phil Collington was delighted with the colt’s performance saying: “It wasn’t exactly how we planned it, drawn in five, I’d said to Josie if she could sit in behind the lead, that would be ideal. She said he jumped ok, but he got a little nudge, and it just took him back a stride, so she just had to accept her fate. However, he showed his class in the straight didn’t he.

“At home, before he ran at Lingfield, he did some sharp pieces of work with some decent milers, and he coped with that, but when he made his debut he got a bit of stage fright, even though he behaved impeccably. He’ll come on with every run, like Josie said. He’s entered at Saint-Cloud for the three-year-old colts Group1PA next month, so now he’s won today, that could well be on the agenda.”

Phil Collington and Josephine Gordon receives the trophies for the Sohar Beach (0-75) Handicap from Robin Gow, presenting on behalf of the Royal Cavalry of Oman © Debbie Burt
AJS Hajaj is a son of AF Albahar who has a great ARO season, siring dual PA Group winner Bayan Athbah (also trained by Collington), as well as another dual winning filly in Muneer. His dam Nouba Al Maury is a full sister to 2021 ARO leading sire and multiple Group 1PA winner No Risk Al Maury. He is a three parts brother to Rawah, a dual Group2PA winner in France, and a brother to AJS Jood, a winner of the Qatari Breeders Trophy in Doha.

Genny Haynes, ARO Commercial and Finance Director said: “We warmly congratulates Mohammed bin Hamad Khalifa Al Attiyah for his first UK Arabian win with AJS Hajaj, as well as Phil, his team at home and Josie Gordon. It has also been brilliant for so many new jockeys to gain their first winners under ARO rules this season and we hope that it will encourage more people into the sport next year.

“This was the fifth and final race sponsored by the Royal Cavalry of Oman with us this season and we thank them for their loyal and generous support of UK Arabian racing for many years. We were delighted that they chose to renew their support of our racing this season. We also thank the British Horseracing Authority and all the team at Wolverhampton racecourse for their assistance with this race.”