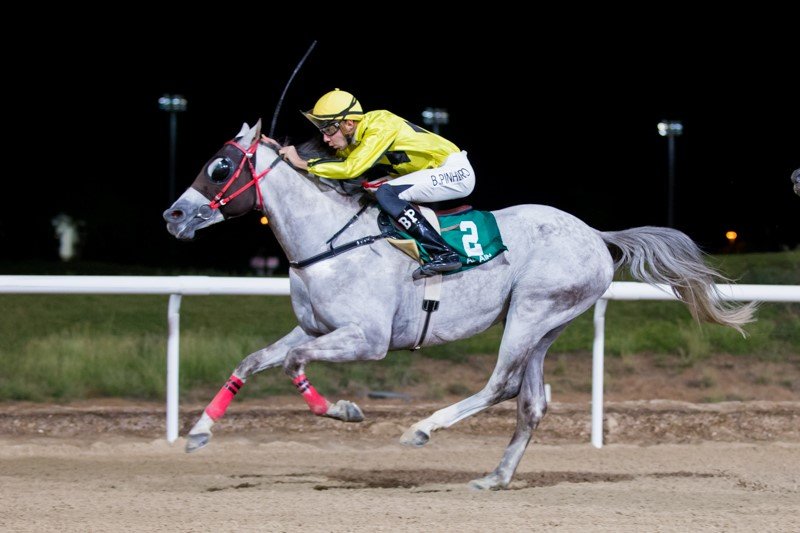 20 October 2020, Al Ain, UAE ~ The new UAE racing season kicked off at Al Ain on Thursday with a seven race card on which the best was saved to last. The finale being the featured 1000m handicap, won by course specialist Jayide Al Boraq (Burning Sand (US) x N’Explosive Al Maury (FR) by Zippy Al Maury), saddled by Khalifa Al Neyadi and confidently ridden by Bernardo Pinheiro.

Settled on the outside of the ten runners in about fifth, the 6-year-old entire was traveling with determination and once sent to the front inside the final 350m, quickened past eventual runner-up Al Mobher and soon had the race in safe keeping. All bar one of the horse’s eight career starts have been at Al Ain where he was posting his sixth career victory, fifth for Pinheiro and fourth over this 1000m, the minimum trip.

A delighted Pinheiro said: “This horse just loves it here in Al Ain and the only time he was beaten on this course was over 1800m.

“He has a lot of speed for a Purebred Arabian as he has shown consistently. It is great to get a winner on the board at the first meeting of the new season.”

The curtain raiser for the new campaign, a 1400m maiden for horses aged four and in private ownership was, like so many races of its ilk, dominated by Champion Owner Khalid Khalifa Al Nabooda and his main trainer, Ernst Oertel. They provided first and second with the owner’s retained jockey, UAE champion Tadhg O’Shea landing the spoils aboard AF Nashrah (AF MAQAM ALEZZ (AE) x DAHAB AL REEF (AE) by SAKLAWI JADRANE (FR), denying Fabrice Veron aboard stable companion AF Musannef. The pair having the race to themselves throughout the final 300m.

Settled just behind the leaders, O’Shea drove his mount to challenge halfway up the straight, leading at the 300m pole and always holding off the challenge of Veron’s mount. Homebred, the winner was opening her account at the fourth attempt and second dirt appearance.

O’Shea said: “That is the perfect way to start the season! She is a nice filly who should improve because she is still learning what is required.”

Veron looked set to gain quick compensation in the following 1400m maiden restricted to 3-year-olds, trying to make all aboard Almahroosa only to be headed in the dying strides by Riccardo Iacopini aboard Mutaqadim (Azadi (FR) x Lilly Rock (FR) by Akbar (FR), saddled by Ibrahim Al Hadhrami.

In a race all 15 runners were making their debut, the winner showed real signs of greenness when asked to challenge, veering towards the runner-up 200m from home and almost throwing his chance away. However, the Royal Cavalry Of Oman homebred ran on strongly to snatch the initiative where it mattered. In doing so the apprentice maintained his 100% strike rate in the UAE having won on his only previous local mount, Bainoona, in the HH Sheikha Fatima bint Mubarak (IFAHR) Apprentice Jockey Championship last November.

Al Hadhrami said: “We were quite hopeful because he is a nice colt, but he will certainly have learned a lot from that experience.”

Jose Santiago, sporting the lime green silks of Al Ajban Stables, partnered his first winner for three seasons when steering 3-year-old debutant Hameen (VALIANT BOY (FR) x RB Burn Baby Burn by TH Richie (US) to success in a 1600m maiden for Abdallah Al Hammadi. It was his first mount of the new campaign and clearly welcome after two blank seasons. Content to take his time in midfield, Santiago took the shortest route on the home turn before edging closer at the top of the long straight. Hitting the front with about 350m remaining, he found he had a willing partner and they ran out a relatively comfortable winner.

A 1600m maiden for horses foaled in the UAE went to AF Almomayaz, (VICTOR ADAM (AE) x AF KALRAJM (AE) by Amer bred by Al Nabooda but carrying the silks of Nasir Askar, worn by Sandro Paiva, the pair making it third time lucky in the process. Trained by Ali Rashid Al Rayhi, the 5-year-old was second over 1000m at Sharjah on his February debut before finishing third over 1400m here at Al Ain, Paiva in the saddle on each occasion.

Previously a maiden after nine starts, 7-year-old Dalil De Carrere (Scoubidou De Carrere (FR) x Viki De Carrere by Dormane (FR) remedied that fact with a smooth success in the 1800m handicap with Fernando Jara in the saddle for Mohamed Daggash. Fourth, which he managed twice, was as close as he had finished previously, but he travelled strongly into contention approaching the final 500m and, once hitting the front with about 325m remaining, never looked in any real danger of being caught.

The only Thoroughbred race on the card, also a 1000m handicap, only attracted a field of eight, but it produced dramatic action with half of the field threatening to win at some stage.

Circle Dream went straight to the front under Bernardo Pinheiro, stalked by Feriyal and Sandro Paiva with the other six seemingly toiling. Feriyal hit the front just after halfway and looked set for success, but he weakened quickly, at the same time Raconteur and Lahmoom suddenly emerged as serious dangers. Circle Dream fought back but Royston Ffrench conjured a telling burst of speed out of Lahmoom, shooting to the front, although hassled by Raconteur, but always appearing in control.