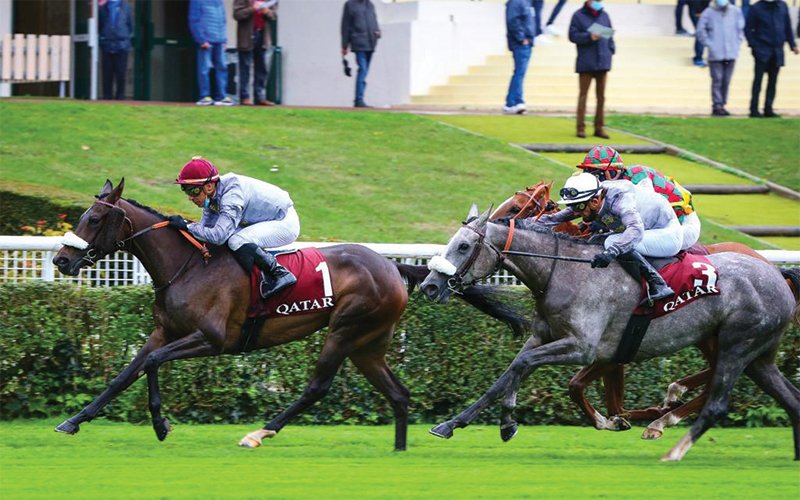 2 October 2020, Paris, France ~Two QREC-sponsored Gr 1, 2000m Arabian races were run at St. Cloud, Paris, on Friday, 2 October, setting the mood for the Qatar Prix de l’Arc de Triomphe weekend. The Gr1 PA Qatar Arabian Trophy Des Pouliches for three-year-old fillies was won by Al Shaqab Racing’s homebred Alawsj (Dahor de Brugere x Bint Jakarta  by Af Albahar) for trainer Thomas Fourcy and jockey Julien Auge to continue Qatari dominance over this title for the fifth year in a row. It was followed by the Gr1 PA Qatar Arabian Trophy Des Poulains for three-year-old colts, which was landed by Sheail Bin Khalifa Al Kuwari’s Hadi De Carrere, for the same trainer-jockey duo, who scored a quick-fire double on the day. Both events crown the leading filly and colt of this age category of the Purebred Arabian breed. QREC CEO, Nasser Bin Sherida Al Kaabi was present at St. Cloud and presented the trophies to the winners.

Opening the weekend of the Qatar Prix de l’Arc de Triomphe, the Qatar Arabian Trophy des Pouliches, a Group 1 for 3-year-old Purebred Arabian fillies, crowned the best 3-year-old filly of her generation. Eight fillies lined up in this championship race, and it was Alawsj (Dahor de Brugere x Bint Jarkata) that lifted the trophy for her owner and breeder Al Shaqab Racing. This was a first Group 1 win for the filly, trained by Thomas Fourcy.

The race took place on heavy ground. There was drama before the start with the withdrawal of the favorite Alkedri (Mister Ginoux) after the jockey, Jean-Bernard Eyquem, fell when cantering to the start. At the start Elaf easily took the rail, running comfortably until the three leaders met down the straight with Alawsj slipping past at the finish for first as Jalela and Teema tied for second in a dead heat. Win time  2.31.26 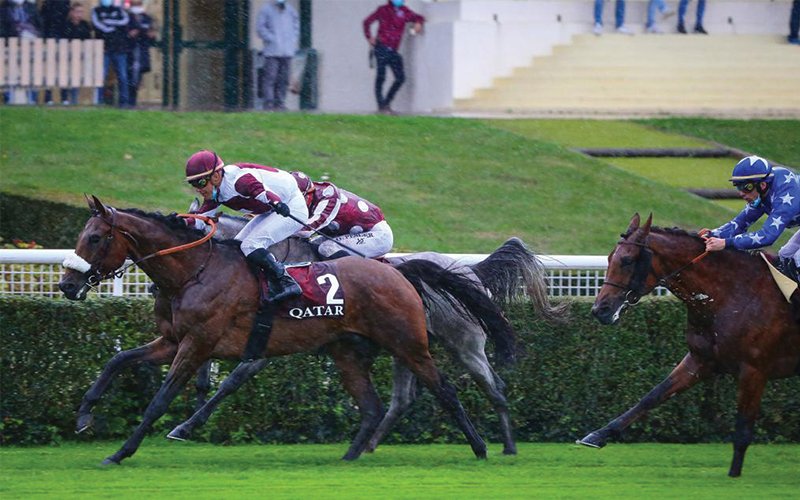 The second Group 1 Purebred Arabian race on the card, the Qatar Arabian Trophy des Poulains, went to Hadi Ce Carrere (Nieshan x Viki De Carrere) in the colors of Sheail bin Khalifa Al Thani. The 3-year-old colt was the starting favorite in the race and came here off an impressive win in the Al Rayyan Cup (Gr1) at Deauville in August.

Alsaher (Mared Al Sahra) was quickly into the lead, with Hadi de Carrere in behind. The eventual winner came up to join him at the entrance of the straight before moving onto the rail on the stand’s side. He then battled with Alsaher, who began to weaken. At the same time, Abbes (TM Frex Texas) came up with a strong run to steal second place. Hadi de Carrère won by a neck, but with more in hand than the distance suggests. Alsaher finished third. Win Time: 2.29.15