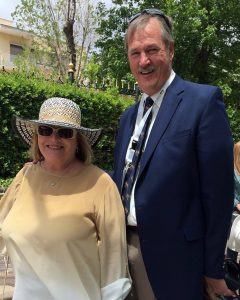 7 January 2021, Aurora, Colorado, USA ~ The Arabian Jockey Club (AJC) is widely considered one of the leading digital promotional platforms on the global scale of Arabian horse racing in the US. One of its most widely followed broadcasts, AJC TV, is now being sponsored by Paul & Kathy Smoke of Britton, Michigan. The Smokes are widely regarded for their unwavering support of Arabian racing for over two decades, with several homebred graded stakes winners and Darley Champions included in nearly 350 starts.

Launched in 2019 by Jonathan and Ashley Horowitz for the Arabian Jockey Club, AJC TV offers monthly broadcasts that visually showcase racing coverage, stories from the turf, and historical material that make Arabian horse racing one of the most majestic global sports. Due to the length of their careers, how often they race, and how much they travel within and between countries, Arabian racehorses develop fan followings and rivalries that AJC TV captures in each episode. Over the last two years, AJC TV has expanded its coverage on a global level to cover Arabian horse racing with reporters and stories from around the world.

“Thanks to the partnership of Paul and Kathy Smoke,” said Jonathan, “AJC TV will grow to offer more race coverage and tell more stories from around the world.”

AJC TV has reached over 66,000 people in 2020 alone from its monthly broadcasts, with an audience that spans the globe.

“After years of working to make it clear that ‘Yes, Arabians race’,” said Kathy Smoke, “the AJC realized that we needed a broadened marketing approach to spread that word that Arabians can be competitive in the sport of racing. AJC LIVE was born, followed by AJC TV. These two marketing entities now enjoy a global presence. It has supported and grown our sport. Paul and I are firmly committed to seeing that these marketing platforms continue. It is in our national interest that we work together for the good of all breeders and owners who love the sport of horseracing. I fervently hope that others will see the importance of sponsoring both AJC LIVE and AJC TV for the betterment of us all.”

Kathy not only is a prominent and successful breeder/owner through Mokee Arabians, but also served as AJC president, followed by her current vice-presidential role to Susan Meyer. The Smokes are also proud members of the Arabian racing partnership, Goldensands Racing LLC.

“Paul and Kathy have been incredible supporters of Arabian racing both financially and through Kathy’s service as President and Vice-President of the Arabian Jockey Club,” said Susan Meyer, AJC President.“They, of course, have also been active participants in Arabian racing as breeders and owners producing and running many successful horses.That they continue to step up, time after time, is not surprising and is a testament to how fortunate Arabian racing is to have them as part of our community.”
~ AJC Release