On the days of 6 and 7 October 2018, the newly renovated ParisLongchamps hosted the grandest weekend in the French racing calendar, the exciting Prix de l’Arc weekend with the centerpiece race, the €5 000 000 Qatar Prix de l’Arc de Triomphe on Sunday, 7 October. Watched by 45,000 spectators, the feature race for Arabians, the Qatar Arabian World Cup with €1 000 000 prize-money, was the third race, the curtain opener for the Prix de l’Arc on Sunday. The Arc weekend included seven races classed at Group 1 level, with four of Group 2 status. On Sunday, 7 October, the eight race card presented the 2000 metre €1 Million Qatar Arabian World Cup just prior to the Qatar Prix de L’Arc. Race patrons saw 16 Group 1 winners go past the stands to the starting gate, including 2017 winner of this race at Chantilly – Gazwan – ready for a rematch.

The front horses looked fairly evenly matched coming down the backstretch and it was anyone’s guess which would have the gas at the end. As it turned out, the outsider, Fazza Al Khalediah under Pierantonio Convertino, took control and outdistanced the competition over the line by three lengths, leaving the fight for second to Khatabb and Ebraz, finishing in that order, with Gazwan fourth. Michal Borkowskie trains the winning 4-year-old colt owned by Al Khalediah Poland. The winning time was 2:13:25. Fazza Al Kahjlediah was bred and born at Haras de Gouffern in France and will continue to train at Al Khalediah Poland with Borkowskie.

Breeder Dr. Mohammed Al Nujaifi is not a stranger to the winner’s circle, and the 4-year-old filly, trained in France by Charles Gourdain, simply outran the field in the 2,000 metre race, pulling ahead at the 300 metre mark to win by five lengths. The winning time was 2:17:57.  This was a great reward for new owner, Abu Dhabi’s Sheikh Tahnoon bin Zayed Al Nahyan. Al Shamoos has a stellar race-bred pedigree with No Risk Al Maury out of Hamiya. Shadwell-owned No Risk Al Maury is a proven strong race sire and dam Hamiya is celebrating her second consecutive year of producing the winner in this race. Muneera (Dormane x Hamiya) was first over the line in 2017, winner of this race run at Chantilly.

“We are very proud of Hamiya,” said Al Nujaifi spokesperson Val Bunting, who bred and raised Al Shamoos at Boisdemen in Tombeboeuf, France. “All her progeny of racing age are winners with four individuals carrying Black Type and two being Gr.1 winners.” The race weekend began on Friday, 5 October at the Saint Cloud racecourse with two races that can be a launching pad for the future, as the horses that run well here often go on to racing greatness.

The 2,000 metre Gr 1 Qatar Arabian Trophy des Poulains for 3 year-olds saw Marid (TM Fred Texas x Al Dahma by Amer) take the largest portion of the €100,000 prize money under Olivier Peslier. After running close to the back of the field of eight horses, Peslier pulled wide down the backstretch and the colt responded with vigor to beat Deryan and Shalaa to the winning line. Trained by A. Watrigant for Sheikh Abdullah Khalifa Al Thani of Qatar, the colt won the race in a time of 2:21:69.

Number two over the line was Deryan by Mahabb for Yas Horse Racing Management, and third in was Shalaa by Dahess for Al Shaqab Racing. 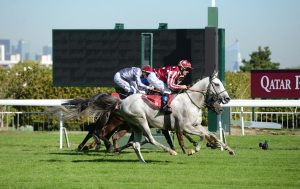 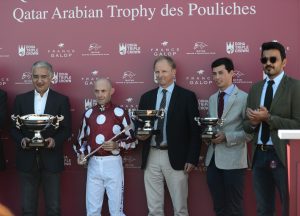 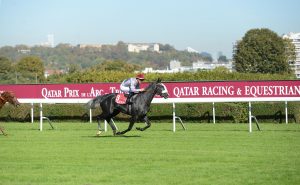 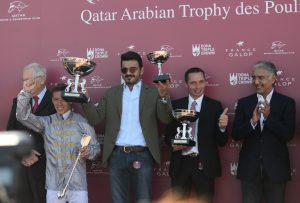 The 2017 edition of this race was won by Rajeh that ran seventh in the Qatar Arabian World Cup this year. The 2015 race was won by Muraaqib, and in 2011, Al Mamun Monlau began his larger career by winning this race.

The field of seven was led by Awasef Al Khalediah around the oval until Shaqab Racing’s Al Haffanah ridden by Julian Auge took the advantage in the last 400 metres for trainer Thomas Fourcy. The filly by Amer out of Al Nachima distanced by three lengths Yas Horse Racing’s stablemate duo Bayan finishing second, and third Baseel, in the time of 2:18:95.

This 97th edition of the Qatar Prix de l’Arc de Triomphe will be unique for many factors, but notably, winner of five consecutive Group 1 races, the English 4-year-old Enable and the Italian jockey Lanfranco Dettori are the first duo that has won two victories in this race at two different hippodromes; Chantilly in 2017 and ParisLongchamp in 2018. Enable (Nathaniel x Concentric) was bred by Juddamonte Farms that also bred wonder horse Frankel. After winning her only race as a two-year-old in 2016 she emerged as the dominant middle-distance horse in Europe in the following year when she won the Cheshire Oaks, Epsom Oaks, Irish Oaks, King George VI and Queen Elizabeth Stakes, Yorkshire Oaks and Prix de l’Arc de Triomphe. As a four-year-old she has now won the September Stakes and her second Prix de l’Arc de Triomphe.

All photos: Thank you Noelle Derré