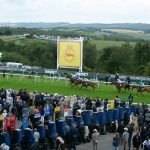 18 July 2020, UK ~ Goodwood has been given permission to allow 5,000 racegoers on the final day of its Glorious meeting on 1 August as the government announced the fixture was among a select list of pilot events which could lead to spectators returning to sporting events in England on 1 October. The racecourse’s…

END_OF_DOCUMENT_TOKEN_TO_BE_REPLACED

10 September, 2014, Los Alamitos, California ~ Fresh off her record-setting win at Los Alamitos on 7 September, MS Dixie has nominated to take on the best of Arabian racers in California in the SHEIKH ZAYED BIN SULTAN AL NAHYAN ARABIAN CUP with (estimated) $47,000 prize money on 20 September at the same venue. Other nominations for this prize include Arabian…