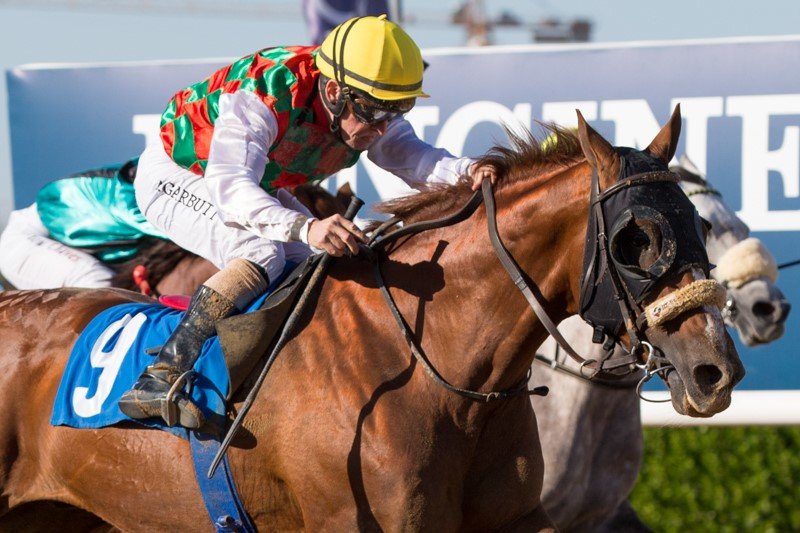 7 November 2020, Abu Dhabi, UAE ~ Abu Dhabi Equestrian Club will become the fifth and final UAE racecourse to stage their first meeting of the season on Sunday, 8 November with a six race card featuring the 2200m Sheikh Zayed bin Sultan Al Nahyan Jewel Crown Prep, a rated conditions contest set to be contested by the 14 maximum field allowed.The prep for the AED5 million December 4 Group 1 Sheikh Zayed bin Sultan Al Nahyan Jewel Crown, like the big race itself, has been extended to 2200m from 1600m this year and Sunday’s race looks a long heat with the local ‘big-hitters’ all represented.

Owners Yas Racing appear to hold a particularly strong hand with Shahm, (Mahabb (AE) x Haboob (FR) by Akbar (FR)) to be ridden by Fernando Jara for Majed Al Jahoori, the runner in the race with the highest official rating. Winner of half his ten starts in his native France, the 7-year-old entire will be having just his second UAE outing having finished sixth on his local and dirt debut in the Group 3 Al Ain Mile won by the same owner’s Somoud.

Richard Mullen, aboard Shahm on that occasion, switches to Somoud (Munjiz (FR) x WADYA (FR) by Akbar (FR)), trained on the track at Al Ain by Jean de Roualle and successful five times, in ten outings, since joining the Frenchman. He finished last season with three consecutive victories, the Al Ain Mile success the middle one and followed by a career highlight win, over Sunday’s 2200m, in the Group 1 Emirates Championship.

De Roualle is looking forward to racing the 6-year-old again this season and said: “He did a great piece of work on Tuesday and is getting fitter all the time. He is probably approaching 90% fitness because he has bigger targets ahead, starting with the main race in December.

“The aim is to have him spot on for that, but he should run well. He is a horse I have always loved.”

Oertel said: “He is a horse who always runs well. It will be a first try at the 2200m at Abu Dhabi, but he stays that far on dirt at Meydan, so that should not be an issue.”

Oertel’s charge was actually third the one time he tried 2200m on dirt, in the Group 1 Al Maktoum Challenge R3 of January 2019 won by Goshawke (Thoroughbred (US) x Sand Witchh (US) by Burning Sand (US)), winless since and one of two in Sunday’s race for Abdallah Al Hammadi who also saddles Balad Al Reef (Bibi De Carrere (FR) x VALDORA (FR) by Dormane(FR)).

Al Hammadi said: “Both have been training nicely, so we hope they can run well in a strong race.

Watson said: “They are both in very good form. Sauternes Al Maury is always capable of a big effort, but is not easy to predict.

“RB Texas Hold Em is a very smart Purebred Arabian and the trip will suit. We just need try him on turf.”