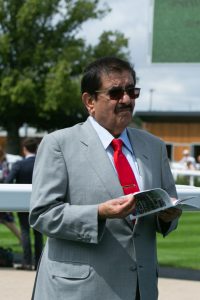 24 March 2021, Dubai ~ A sad day for the world. This morning a statement was released by Shadwell Stud that read, “It is with great sadness that Shadwell announces the death of His Highness, Sheikh Hamdan bin Rashid Al Maktoum. He died peacefully on Wednesday, 24 March 2021. Sheikh Hamdan was 75 and had been unwell for some months.

For the past 40 years, Sheikh Hamdan has been a powerful presence in race horses around the world, both Thoroughbred and Arabian, many of them bred and curated through his Shadwell Stud operation. Sheikh Hamdan maintained the 2,400-hectare Shadwell Estate in Norfolk where he established headquarters for his worldwide breeding operation.

Sheikh Hamdan was the second son of Sheikh Rashid Bin Saeed Al Maktoum, who passed away in 1990 after ruling the emirate for 32 years, beginning in 1958.

HH Sheikh Hamdan’s passing was also noted by his brother, His Highness Sheikh Mohammed Bin Rashid Al Maktoum, Vice President and Prime Minster of the UAE and Ruler of Dubai, through his official Twitter account.

A ten-day period of mourning was announced in Dubai and flags will be flown at half-mast per a directive from the UAE President, according to the Dubai Media Office, for a period of 10 days from today.

Al Raihe runs Eqtiraan in the Dubai Turf and Al Zahir in the Dubai Kahayla, while Charles Hills sends out Khaadem and Dubai-based Doug Watson has Motafaawit in the Al Quoz Sprint, and Musabah Al Muhairi runs Zainhom in the Dubai Turf.
More News: https://www.thenationalnews.com/sport/horse-racing/racing-pays-tribute-to-sheikh-hamdan-bin-rashid-1.1190493