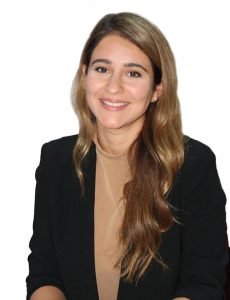 Christina Abu-Dayyeh (JOR) has been appointed as FEI Endurance Director and will start in her new role on 1 April 2021. © FEI

Christina Abu-Dayyeh (JOR) has been appointed as Endurance Director for the Federation Equestre Internationale (FEI), the global governing body for equestrian sports.

Ms Abu-Dayyeh, 31, has been Secretary General of the Royal Jordanian Equestrian Federation since 2017 and will start in her new role at the FEI on 1 April 2021. Her arrival in Lausanne (SUI) will further improve the gender balance in the FEI management team, with seven females and eight males.

During her time at the Jordanian National Federation, Ms Abu-Dayyeh was responsible for the management of all equestrian disciplines in the country, as well as heading up the Organizing Committees for the biggest equestrian events in Jordan across all disciplines. She also worked directly with the Ministry of Agriculture on all equestrian matters, including quarantine procedures, animal welfare and the import/export of horses.

Prior to taking on the role at the National Federation, she worked as a marketing and communications consultant at the Princess Alia Foundation, and Al Ma’wa for Nature and Wildlife in the Jordanian capital, Amman, the only wildlife sanctuary in the Middle East. She was a research analyst at a political consulting start-up in Abu Dhabi, and also worked in consulting and recruitment roles in Vancouver (CAN).

Ms Abu-Dayyeh has a Bachelor of Arts degree in Political Science from Dalhousie University in Halifax, Canada and a Masters in Management and International Business from the University of British Columbia in Vancouver.

“We are very happy to welcome Christina Abu-Dayyeh to the FEI to take on this really important role”, FEI Secretary General Sabrina Ibáñez said. “The discipline of Endurance needs strong governance and we are confident that Christina is the right person to deliver the right mix of firmness and tact. She comes to us with a wealth of experience, not just in equestrian sport, but also in marketing and communications, skill sets that she will need for this post. Her knowledge of our sport in the Middle East, where Endurance is such a key part of the local culture, has given her a crucial insight and a vision that will undoubtedly benefit both the FEI and the discipline itself.”

“One of my proudest achievements at the Royal Jordanian Equestrian Federation has been creating open lines of communication and the transparency that was needed to inspire the trust of the community and stakeholders, which ultimately gave me a credible voice to move the sport forward in Jordan”, Christina Abu-Dayyeh said. “Leaning in and actively listening to those in the field who have mastered so many elements of it kept me humble.

Ms Abu-Dayyeh has strong Endurance experience, both at a national and international level, as the Jordanian National Federation is the main organizer of Endurance events in the country. She singles out Endurance as her favorite of all the disciplines that she is currently responsible for in her role as Secretary General in Jordan.

“I was aware that our Endurance Officials were having trouble fulfilling their crucial role of officiating at events and quickly realized that the main issue was miscommunication and the athletes’ lack of education on the rules. We made a huge effort to improve the knowledge base of our athletes, educating all stakeholders on the technical aspects of the sport and what it means to be a true horseperson, with the result that numbers increased by over 120% for our national rides.

“I believe that education and communication with the athletes and their entourage are key to improving horse welfare in the discipline internationally, continuing the fantastic work already done by the Endurance Temporary Committee.”

The FEI has been actively seeking a replacement Endurance Director since the announcement in March of this year that the Endurance & Driving Department was to be restructured with the aim of further streamlining management of the Endurance discipline. The restructuring was to allow for a special focus on a discipline that requires stringent oversight, although plans for the speedy recruitment of a new Endurance Director were significantly slowed by the Covid-19 pandemic.

Ms Abu-Dayyeh will replace Manuel Bandeira De Mello (POR), who joined the FEI in 2014 as Endurance Director. He will stay on in the role until Ms Abu-Dayyeh arrives in Switzerland and will remain at the FEI with the new title of Director Driving, Para Driving & Special Projects, allowing for an optimal handover to the new Endurance Director.