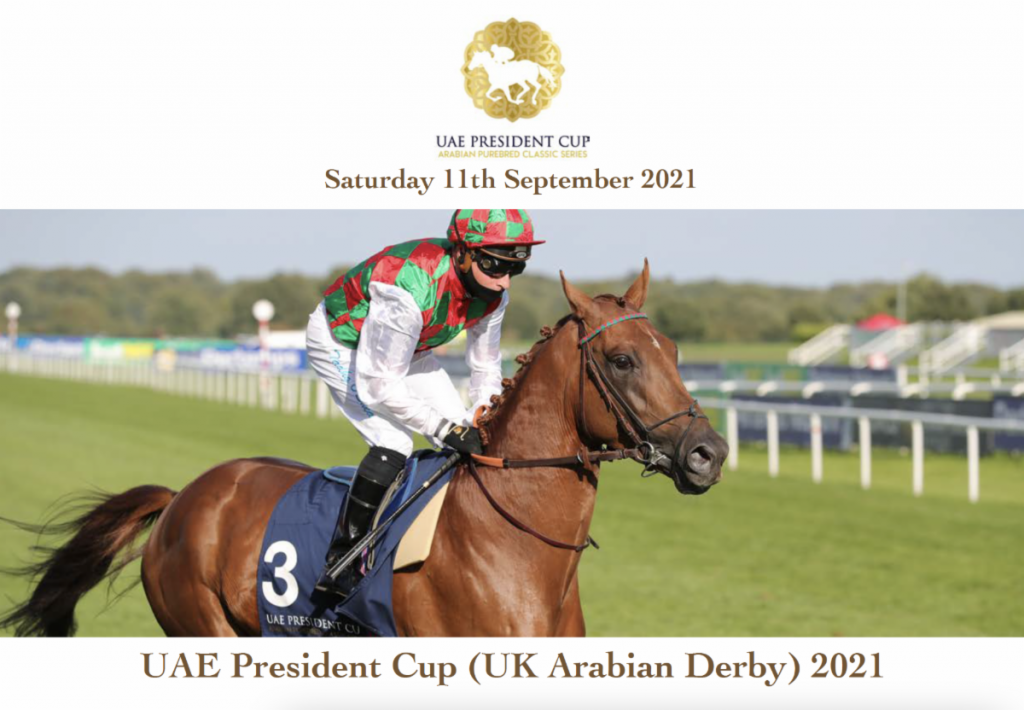 12 August 2021, UK ~ The Arabian Racing Organisation (ARO) has received fifteen entries for the UAE President Cup (UK Arabian Derby) to be run at Doncaster on St Leger Day on Saturday September 11th as part of the Cazoo St Leger Festival. The UAE President Cup resumed its’ association with the UK Arabian Derby in 2016, with this Group 1PA race exclusively for four-year-old Purebred Arabians, held over a mile and a quarter for a prize fund of £80,000.

The five overseas entries are headed by Abbes, who could be seeking compensation for finishing runner-up in the French equivalent for which he started favourite. He may be joined by stablemate HM Al Sakeb, a winner over a similar trip and a brother to Group1PA winner and sire Al Mouwaffak. Also entered from France is the recent Listed PA winner Arion, as well as Ameland and Sarhan, both winners over further.

As to be expected the UK’s highest rated four-year-olds have been entered including recent French imports Alghanny and Khateer, as well as Nadelshiba, a winner in Belgium at three years, and Farasah and Aldanna who were separated by a head on their debuts in April.

Matar Al Yabhouni, Chairman of the Higher Organizing Committee of the UAE President Cup, said: “We are pleased on the success of the prestigious cup on the European race tracks and it’s benefits to owners and trainers”.

Genny Haynes, ARO Commercial and Finance Director was thrilled commenting. “We were excited to welcome back the President of the UAE Cup in 2016 and we are proud that the race consistently produces a top-quality winner. We are extremely grateful to the UAE President Cup Series for their continued support of our feature race for four-year-olds and to Doncaster racecourse for their support of international Arabian racing. This race is now firmly established as part of St Leger Day, at Doncaster’s most prestigious meeting of the year which enhances the contest’s prestige and Arabian racing’s status in the UK.”