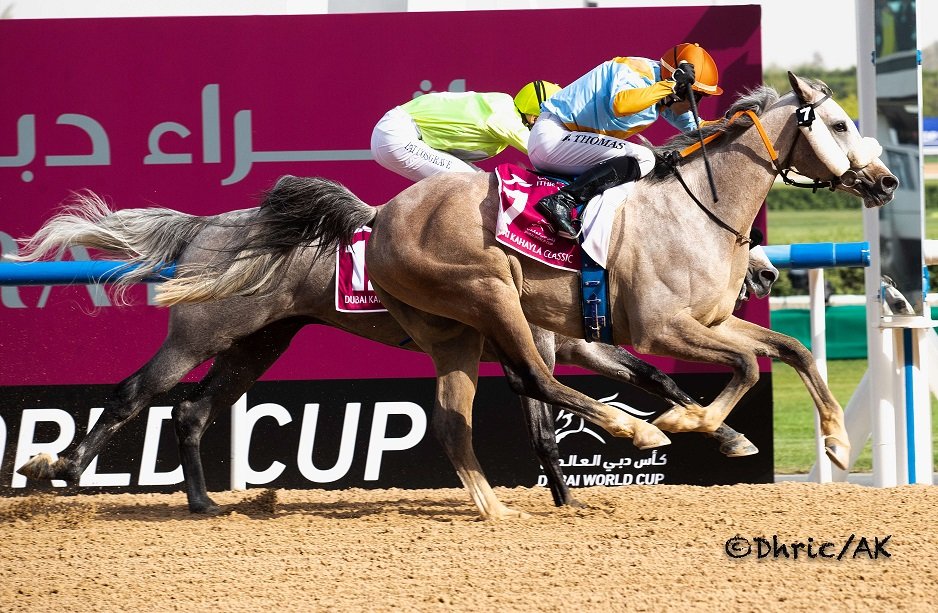 Trained by Alban de Mieulle and ridden by Ronan Thomas, the five-year-old Dahess gelding might have felt he had broken away in the straight, but Kerless Del Roc, trained locally by Ahmed Al Mehairbi, was in no mood to give up and challenged until the end in hands of Pat Cosgrave, with the leading duo pulling well clear of the rest of the field.

In the straight they went head to head until virtually the final 100 metres when First Classs appeared to pull away, only to be pegged back yet again as Kerless Del Roc dug deep to reduce the margin of defeat to a head. A further nine and a half lengths back in third was Hadi De Carrere for trainer Thomas Fourcy and rider Olivier Peslier.

Alban de Mieulle, trainer of the winner First Classs, said: “I have been placed before in this race and the Sheema Classic so to get a win on one of the biggest nights in global racing is amazing. He’s a different horse and we’ve spent the last five or six months trying to make him better and he’s really come along nicely. This means so much and I am so pleased that Qatar has been able to win a race at the Dubai World Cup meeting.”

Winning jockey Ronan Thomas said: “We went very quickly and when we came round the bend I was very confident because last time at Sakhir I won quite easily. He came from America so he’s tough on the dirt and he’s just improving. I travelled very easily and when I asked him for a turn of foot he gave me everything to the post.

“I was very confident of getting there because he won so easily last time out in Saudi Arabia. I beat some good horses and I beat them without using the whip and very easy. Today was another sport though because we were on the dirt and against a tougher field but we won by a neck and it was a great result.”

Ecstatic US Breeder Deborah Mihaloff of Cre Run Farm was there to see this win by her home bred horse. She had said before his Saudi win that he was sent to Qatar and trainer Alban De Meuille because he is a horse that needed more distance. She was confirmed by his latest over 2000m wins proving him a World class Gr 1 runner.

Ahmed Al Mheirbi, trainer of runner-up Kerless De Roc, said: “It was close, but it was good. You know (finishing) second is a good result. We will come back next year and try to win it.”

Thomas Fourcy, trainer of third-placed Hadi De Carrere, said: “He ran well, but it’s difficult to come from so far back. He kept running on all the way to the finish so I’m still happy.”

Olivier Peslier, jockey, Hadi De Carrere, said: “Going past the winning post on the first circuit we got shuffled back and from that point it was difficult to make up the ground. He ran on well up the straight.”

4th – Brraq, jockey Pat Dobbs said: “He never really travelled for me but still kept on to get fourth. I’d say he needs blinkers.”

6th – Dergham Athbah, jockey Jim Crowley said: “I was caught a bit wide on him, he ran well enough considering.”

7th – Deryan, jockey Ioritz Mendizabal said: “He was in third going well, then came under pressure before the home turn and we lost ground.”

13th – RB Rich Lyke Me, jockey Adrie De Vries said: “After the start he shied away from the horse outside him and I thought we were going to go through the fence. We were knocked out of the race, we ended up so far back. It was very out of character for him.”

14th – Ashton Tourettes, jockey Christophe Lemaire said: “I had a good spot early in the race but he didn’t quicken.”

16th Jarif, jockey Cristian Demuro said: “He did not handle the dirt there.”