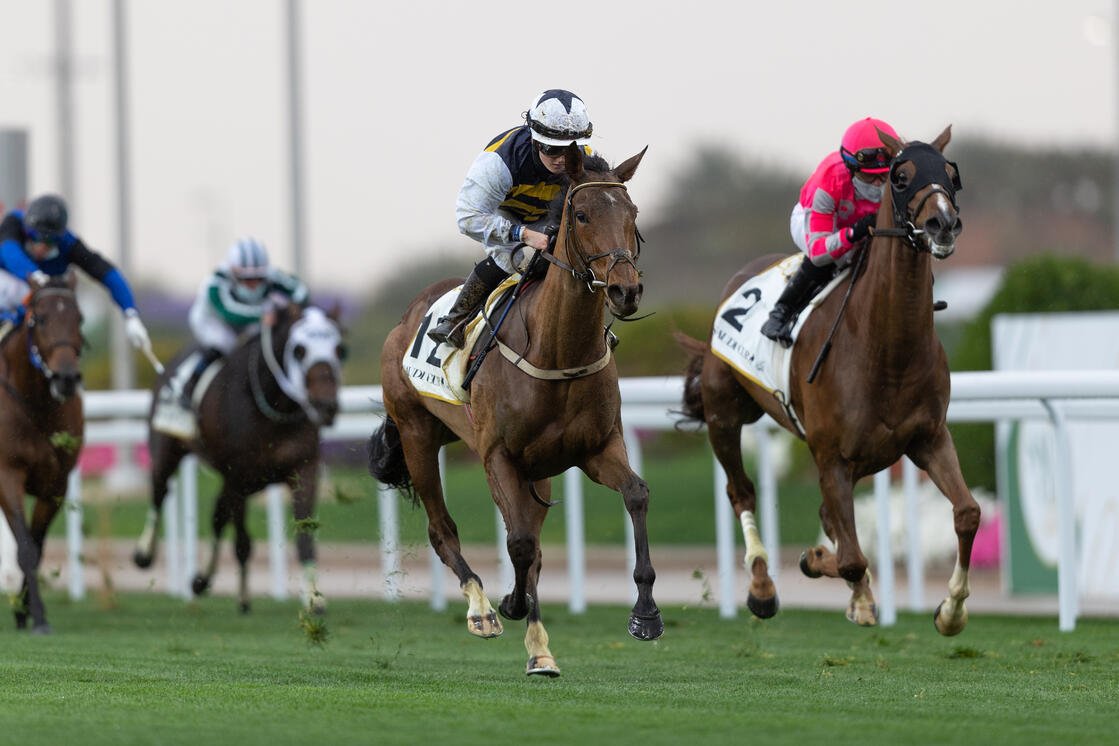 Hollie Doyle and True Self get the better of Channel Maker to win the Neom Turf Cup Photo credit: Jockey Club of Saudi Arabia // Neville Hopwood

20 February 2021, Riyadh, Saudi Arabia ~ Hollie Doyle has become one of British racing’s shining stars with her exploits over the last few months and her talents were demonstrated on the global stage with a perfect late run on True Self (IRE) in the US $1,000,000 Neom Turf Cup.

Now an 8-year-old mare, the Willie Mullins-trained True Self has been a real globe-trotter for Ireland, her most notable overseas victories to date coming with consecutive scores in the Queen Elizabeth Stakes in Australia.

Knowing that her mount would have plenty of stamina for the 2100m event, Doyle allowed For The Top (ARG) to take the field along before the big United Stakes contender Channel Maker (CAN) and Joel Rosario made their move along the back stretch.

Doyle, whose prolific streak of victories and first Group 1 success in 2020 even put her on the podium in the BBC’s Sports Personality of the Year Award, timed it to perfection, coming past Rosario with 50m left to run and a length and a quarter clear at the post to become the first female jockey to ride a winner on The Saudi Cup card.

Hollie Doyle, jockey, New York Central, 1st said: “It has been an incredible year, so it’s great to get the new year off in a prestigious race such as this. I thought she was my best winning chance of the day, I watched all her performances and a step back in trip was a very clever move by Mr Mullins. They set a generous gallop the whole way round, but I managed to track them and got the splits up the straight. Willie said she’s got one burst of speed and that’s what she had.”

Willie Mullins, trainer, True Self: “It was a fantastic ride by Hollie and the team have done a great job out there. We bought her originally as a mare to go hurdling with but she just has a huge amount of speed and all the jockeys who rode her said a mile and a quarter would suit her. It didn’t always work out but it was great to come for a big prize like this. The two plans this year were here and Australia at the end of the year. I’ll have to talk to the owners, OTI Racing, to decide what else we do.”

Joel Rosario, jockey for Channel Maker, 2nd said: “I mean it was good. The plan was to go to the lead and then he ran his race. I thought for a second I was going to get there and then the horse came with a strong run. He ran a big race. I got into Riyadh at one in the morning, everything was fine. I’m glad I made it here.”

Alexis Moreno, Emirates Knight jockey who came in 3rd said: “The race was a little split, so I just kept in there. I thought my horse ran a good race, so that was all we could do. Hollie Doyle was flying the last 200m; she deserved it!”

Gavin Ryan, jockey, Saltonstall, 4th: “The track is getting a bit wet but it’s still quick ground. The race had a real good tempo. My horse ran a cracker and finished off really well. Lovely track.”

Ryan Moore, jockey, Tilsit, 5th: “He had a perfect trip, the rain didn’t help him.”

Olivier Peslier, jockey, Gronkowski, 6th: “He started well behind the lead, but was same paced after that. With the rain, the turf isn’t real fast but it’s fine.”