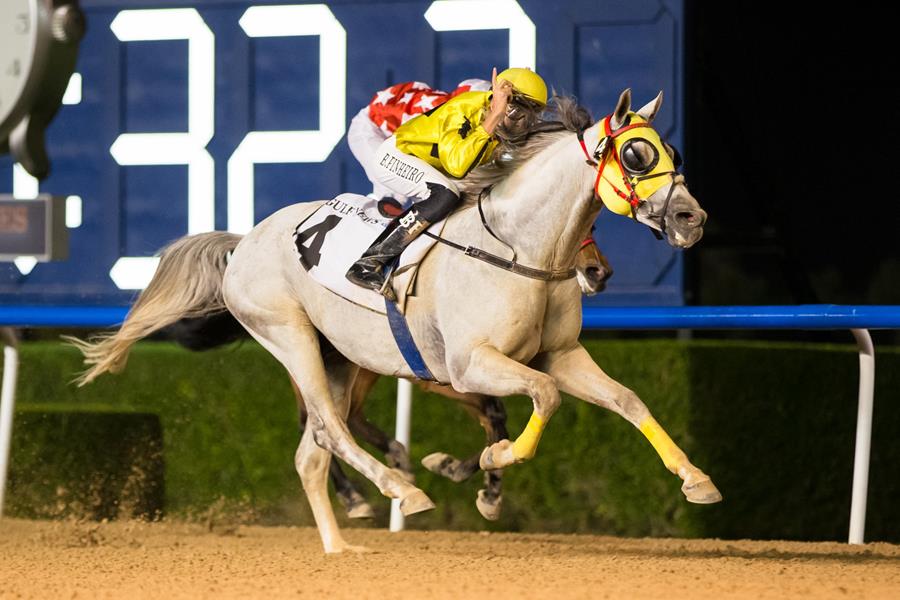 19 November 2020, Meydan, UAE ~ Racing at Meydan on Thursday evening, 19 November, was highlighted by the only Purebred Arabian contest on the card, the 1400m Group 2 Bani Yas sponsored by Gulf News, won by the consistent and improving Jayide Al Boraq.

Confidently ridden by Bernardo Pinheiro in the predominantly yellow silks of Al Rahmani Racing, the 6-year-old entire was winning for the seventh time on just his ninth start and in by far the strongest contest he had tackled. This is his fourth straight win for the 2020 season, with one second on the turf in Abu Dhabi in December 2019.

This was his third attempt at the trip and, as well as consistent, he has to be considered versatile as he is now victorious over 1000m, 1400m and 1600m, the distance over which he made a winning debut at Al Ain, in March 2019. He also won at the same track on his reappearance, over 1000m, exactly three weeks ago, but that was in handicap company and, as alluded to, this was a big step up in class.

Success looked unlikely at halfway when RB Money To Burn was going clear at the front whereas Pinheiro was attempting to find racing room, appearing trapped on the rail in about sixth, albeit traveling well. Pulled wide entering the straight, Jayide Al Boraq made relentless progress and, with RB Money To Burn weakening in the final 150m, was able to sweep past that rival about 50m out to score going away at the line. Third in was AF Alwajel.

It was a biggest UAE winner for all the connections and Pinheiro said: “I was pretty confident coming here this evening because he is a lazy horse who only ever really does enough, so I thought there was improvement there.

The jockey added: “I was not able to race as prominently as I wanted, but he was always going strongly. The eventual second was a long way clear, but I knew, entering the straight, I would at least get second and in the final 200m I was always going to win. It is a great result, not only for myself, but for a smaller trainer and owners, so we will enjoy it and hope there is more to come.