The Happy Birthday Your Majesty Wathba Stallions Cup (0-65) Handicap may have been the longest race in the Arabian Racing Organisation (ARO) calendar, however it was still able to produce a thrilling finish. At the end of the two mile one furlong marathon, the race leader Jeewan and Dougie Costello beat Aljawaaher and amateur jockey Lewis Saunders by a nose in a photo. In third was previous Wathba Stallions Cup winner Falcon Du Roc’h. Gerko De Tenelle, also trained by winning trainer Jayme Plumb, was fourth.

Plumb who also owns both horses with her husband Darren, was delighted with their performances saying: “This is our second ever winner with ARO. Jeewan won carrying the colours of Darren’s late father, and that’s their first win, so that’s really special for us. This is only our second season with Jeewan since we got him from Shadwell, he’s so quiet at home a child can ride him, but he livens up when he gets to the races.

“Dougie gave him a lovely ride. It’s a trip that both our horses liked, we’ll see how they are after the race and what the handicapper does before making any further plans.” 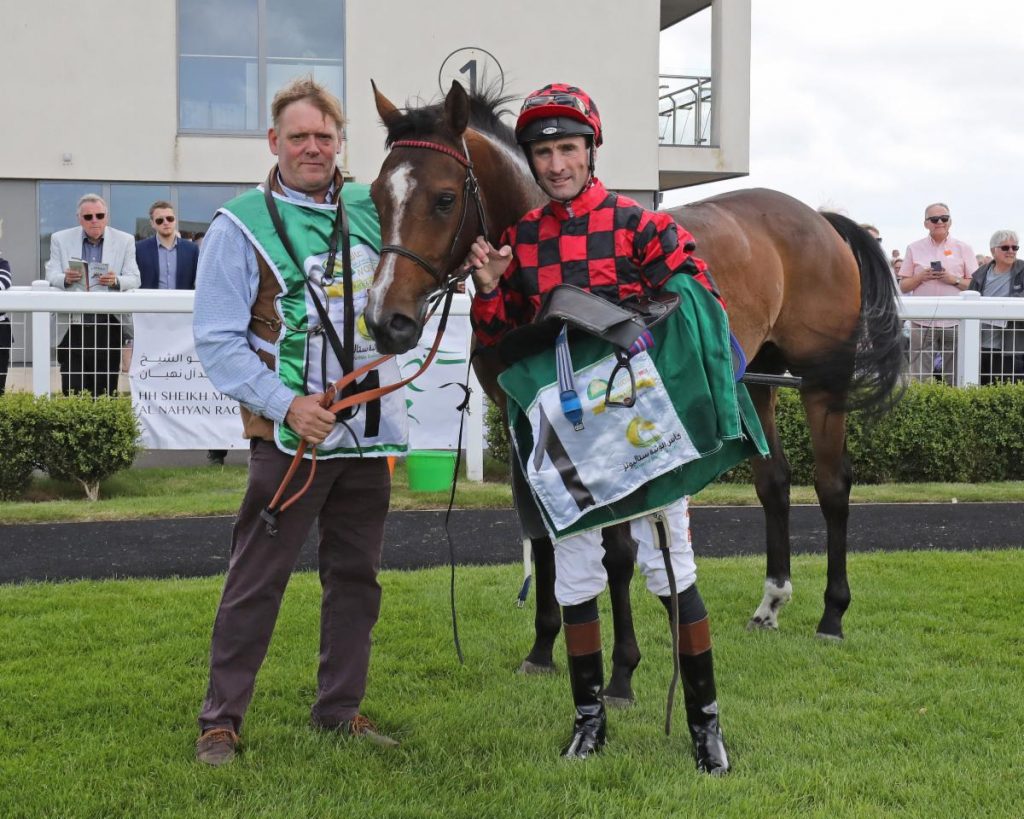 It was a first Arabian winner for jockey Dougie Costello who had previously ridden Jeewan for his owner breeders Shadwell Estates before the horse joined the Plumbs two years ago. Commenting on the horse’s performance he said: “We got a soft lead in front and he was crying out for the line when it came. He’d probably appreciate a bit of juice in the ground, but he’s tough and he acts on this, but I’d say he’d be happier on easier ground.”

Lara Sawaya, Executive Director of the HH Sheikh Mansoor Bin Zayed Al Nahyan Racing Festival, said: “The Festival is thrilled to see such a competitive finish to the race honouring Her Majesty and we congratulate the winners today. It is also fitting that Jayme Plumb should train the first winner on Bath racecourse’s annual Ladies Day card.”

ARO Director Bill Smith who presented the trophies said: “ARO warmly congratulates Jayme and Darren Plumb on their success with Jeewan and Gerko De Tenelle. ARO is extremely grateful to the HH Sheikh Mansoor bin Zayed Al Nahyan Racing Festival and their sponsorship of our racing through the Wathba Stallions Cup series which provides excellent support to our small owner-trainers such as the Plumbs.

“Jeewan is also the third winner this season for our participants who have bought or leased horses from the Shadwell dispersal, ensuring that the legacy of our Late Patron, HH Sheikh Hamdan Al Maktoum continues in UK Arabian racing.”

Concluding he said: “We also thank the staff at Bath racecourse and the British Horseracing Authority for their assistance with our racing and Baker McVeigh International for sponsoring the Best Turned Out Award which was won by Annette Hansford and Falcon Du Roc’H.”
~ end