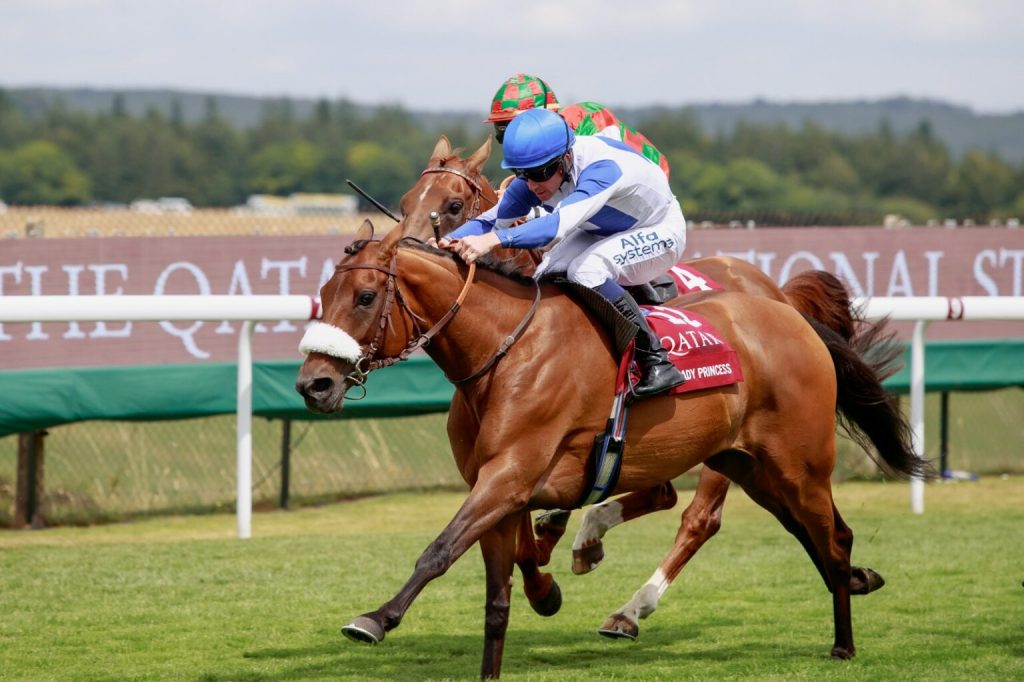 28 July 2022, UK ~On 27 July, the second day of the 2022 renewal of the Qatar Goodwood Festival, the start of the eight-race card was a Qatari victory when LADY PRINCESS (General x Nacree Al Maury) retained the title of the Group 1 PA Qatar International Stakes for the second consecutive year. With this victory under her belt, Lady Princess now boasts an incredible record of four consecutive, and a total of eight, group one victories in addition to her other high-profile victories. She also managed to keep the title Qatari for the fourth year in a row.

The richest Arabian race on the British racing calendar, the Gr.1 (PA) Qatar International Stakes worth £400,000 in prizemoney produced yet another thrilling finish and went the way of the Lady Princess.

The French trained six-year-old has been masterfully handled by leading Arabian trainer Thomas Fourcy. Now an eight-time Gr.1 (PA) winner Lady Princess travelled ominously well throughout the 1,600m contest and was produced to perfection by jockey Jim Crowley, despite a moment of panic just inside the 200m pole.

Set off towards the rear in her habitual fashion, the talented six-year-old kept close tabs with her chief rivals Samlla (Assy), owned by HE Sheikha Reem Bint Mohammed Bin Khalifa Al Thani, and Hattal (Mahabb). Lady Princess sliced through the field with ease once in the straight but met trouble inside the closing stages. Trying to pounce between Hattal and Samlla, Lady Princess was briefly sandwiched but once in the clear she cruised to an impressive eighth top-flight success. Hattal took second, while Samlla cracked close home and finished third.