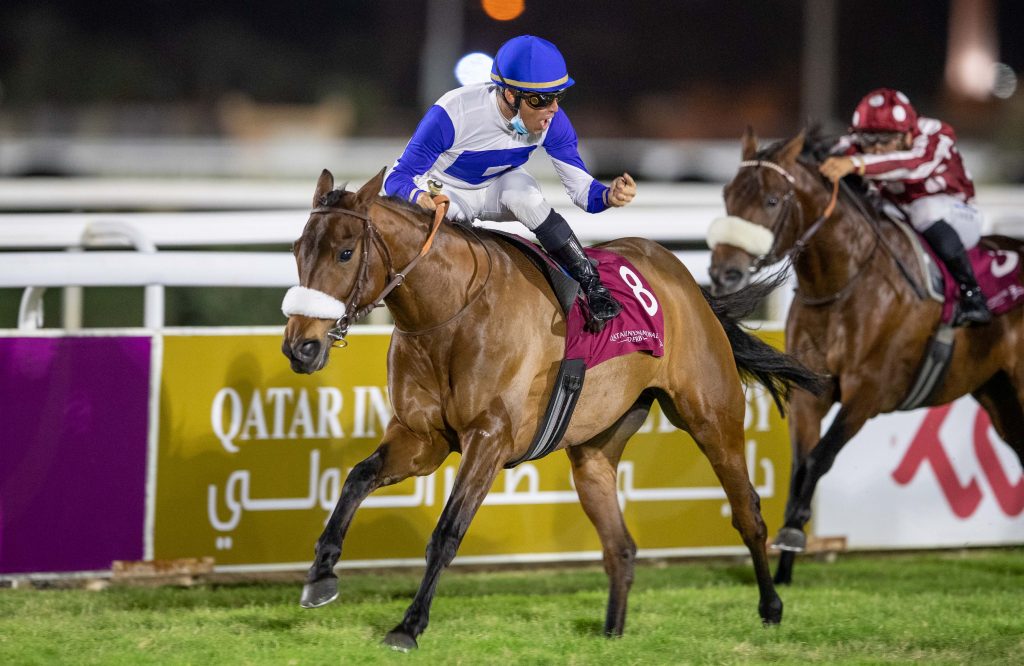 4 December 2021, UAE ~ Arguably the biggest meeting of the whole season on the Abu Dhabi Equestrian Club’s acclaimed turf surface, Sunday’s seven race fixture is highlighted by the 2200m Group 1 Sheikh Zayed bin Sultan Al Nahyan Jewel Crown, won last year by Belgium’s Messi and in 2021 misses a planned attempt to become the first dual winner of a race inaugurated in 2015 after being confirmed a non-runner on Thursday due to lameness.

However, the European challenge still looks strong with four runners trained in France, the country which supplied both 2017 winner Muraaqib and Al Shamoos who landed the prize 12 months later.

Pat Dobbs maintains the partnership and the trainer said: “Obviously we won it last year but it will not be easy to do so again. In all honesty, his preparation has probably been less this year but at least we have a nice draw.”

The European challenge looks particularly strong with four runners trained in France, the country which supplied both 2017 winner Muraaqib and Al Shamoos who landed the prize 12 months later.

On official ratings, the Thomas Fourcy duo of Hoggar De L’Ardus, the mount of Maxime Guyon, and Lady Princess, to be ridden by Jim Crowley who was aboard Muraaqib four years ago, appear the main dangers to all.

Both are already Group One winners and Fourcy said: “Lady Princess was in great form during the European season and she is a very smart mare, not the biggest, but all heart.
“Hoggar De L’Ardus also had a very good year at home, is in great form and stall nine is a good one.

Only Al Asayl’s RB Burn has kept the prize in the UAE but Salem Al Ketbi will be hoping to provide the training operation a second winner in the race, saddling Basmah on whom Richard Mullen will be sporting the silks of HH Sheikh Khalifa bin Zayed Al Nahyan.

Assistant trainer, Derek O’Brien, said: “Draw four is ideal because she likes to make the running. On ratings, she has a bit to find, but she has been prepared for this and has been training well.”

Based on the track at Al Ain, Jean de Roualle has always thought the world of Somoud who was bitterly disappointing in this last year having won the course and distance prep.
These are the optimum conditions for Yas Racing’s homebred 7yo entire as he has demonstrated winning the two most recent renewals of the Group 1 Emirates Championship and February’s Group 1 HH The President Cup, all over this 2200m here in the capital.

De Roualle said: “He needed his run in the prep race this year and hopefully he will build on that this Sunday. He won the prep easily last year before disappointing in the big race itself so, hopefully, he can win Sunday having been last in the prep this time!”

Helal Alalawi is based in Al Ain near De Roualle at the National Stables whose colours will be carried by exciting local debutant Soko, a Group One winner in his native France.

Oertel said: “We are delighted to get the invitation to the race. The horse is in great form and we know he likes it around Abu Dhabi. He won the National Day Cup last year and his jockey, Tadhg O’Shea, wanted stall one and that is what I drew!”

The only Thoroughbred race on the card is the 1600m Listed version of the Sheikh Zayed bin Sultan Al Nahyan National Day Cup with 13 set to face the starter, including Pakistan Star, having his second UAE start since joining Doug Watson.

Something of a legend in Hong Kong, both for his undoubted talent but also for being something of ‘a character’, the 8yo Shamardal gelding ran just once last season, not seeming to enjoy the Meydan dirt, almost exactly a year ago, in the 2000m Listed The Entisar.

His five Hong Kong victories include a pair at the highest level, including his most recent, the 2400m Group 1 Champion & Chaters Cup at Sha Tin in May 2018.

Watson said: “He’s been training great and drops back to a mile on turf which we hope might suit him.”

The latter delighted his trainer, Nicholas Bachalard, seeking a third win in the race and eighth for his main employer, Jebel Ali patron Sheikh Ahmed bin Rashid Al Maktoum, the most successful owner in a race introduced to the programme book in 1993.

Of Richard Mullen’s mount, Bachalard said: “For a horse having his first turf outing it was a very good run last time and certainly gave us the confidence to run in this better race.”

The meeting is to be staged under the auspices of the Sheikh Mansoor Racing Festival, as was Friday’s valuable card at Al Ain and Saturday’s GCC Cup fixture at Sharjah.