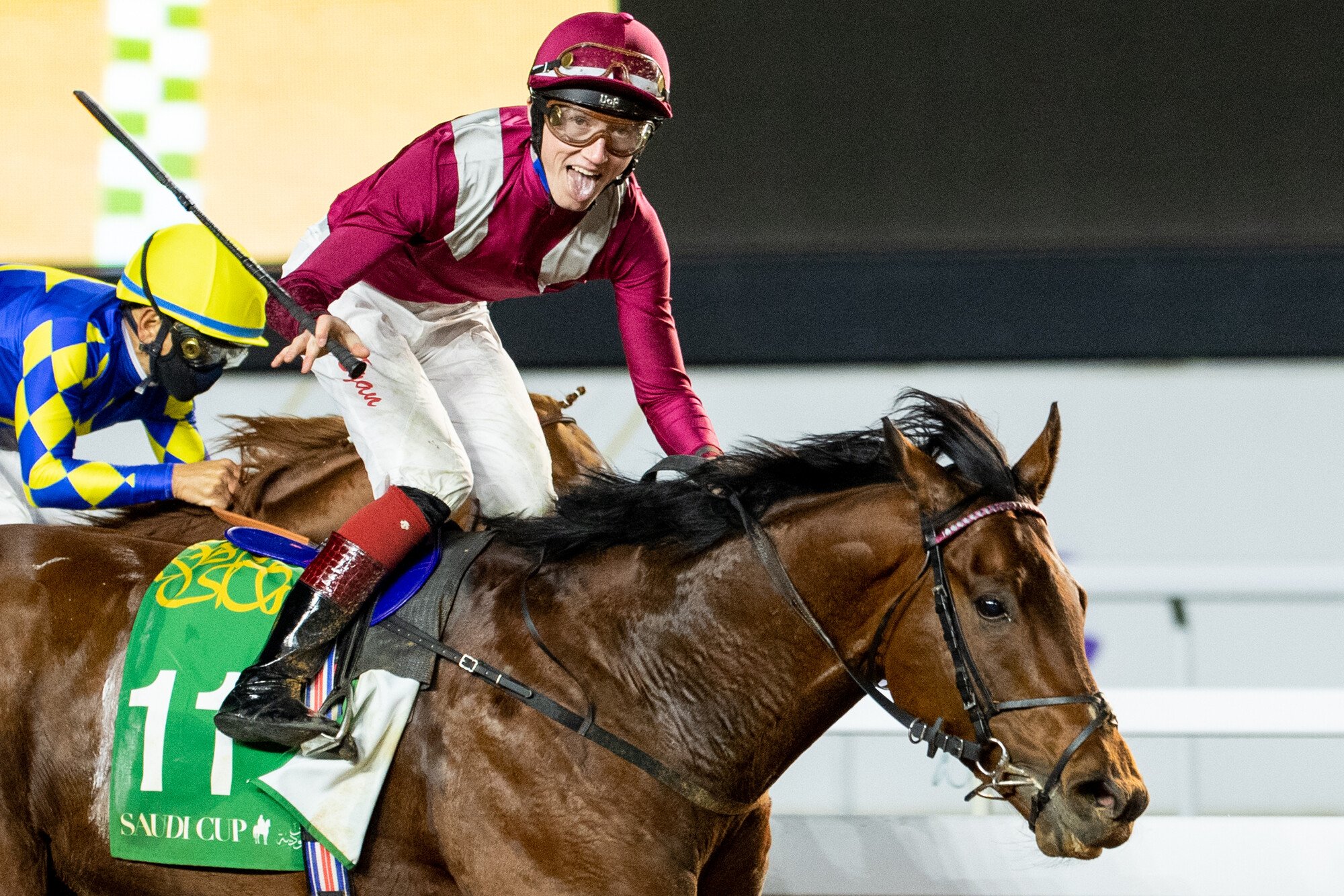 20 February 2021, Riyadh, Saudi Arabian ~ The John Gosden trained Mishriff (IRE), named after his owner Prince A A Faisal’s best friend, went one better today than his second place finish in last year’s Saudi Derby when he caught Charlatan (USA) in the final 100m to win the US $20 million The Saudi Cup, the world’s most valuable race.

Mishriff was ridden by the 21-year-old Irish jockey David Egan to beat the Bob Baffert-trained Charlatan by a length, with Great Scot (GB) finishing a further six and a half lengths back in third.

Drawn wide, the 4-year-old son of Make Believe got himself into a good position behind the leading pair of Charlatan and Knicks Go (USA), both setting a good pace. Launched in the final bend, Mishriff picked up the grey Knicks Go, finishing eventually in fourth position, and then went after Charlatan.

Big-race rider Mike Smith was hard at work on Charlatan but could do nothing against a determined Mishriff, who covered the 1800 metres on the King Abdulaziz dirt track in 1:49.59.

Egan, who is the retained jockey of Prince Faisal, had not been able to partner the colt when he lifted the Prix du Jockey Club – the French Derby – in June last year, because of travel restrictions due to Covid-19 and was obviously delighted to win this important race. His father John Egan, himself an accomplished Group 1 winning jockey, was there to witness his son’s greatest success.

Jockey David Egan said: “Unbelievable. I’ve been dreaming all my life of winning a race like this. Obviously it is the highest thing I will win for a while now; the Saudi Cup is the richest race in the world. I’d like to thank Prince Faisal, Mr Gosden, all of his team, Thady is here, Ted Voute – there are so many people to thank, and Mishriff most of all. He’s the champion.

“I’d like to thank The Saudi Cup for putting on such a great event in these tough times and for making everything as Covid-safe as we could all be. I’m just delighted to get back on Mishriff and win for all the team.

“Last year Mishriff was always a horse who seemed to jump slow; maybe it was just through immaturity. Last year in the Saudi Derby he jumped slow behind the Japanese horse to finish second – I thought to myself that if he had jumped on terms he nearly would have won last year. But he’s matured throughout the year and Mr Gosden had him primed for today. He looks a million dollars – well, 10 million dollars!

“He’s been training well on the track; he seems to enjoy the track here and has been very relaxed in the mornings. He jumped very well today – as good as the two American horses. I squeezed him on for the first 50 yards and I was actually surprised how well he went, through the back straight I was on Mike Smith’s (rider of Charlatan) heels and he was really taking me into it. I got pressed on the rail when we started turning and that was the only worrying sign I had, when they started quickening whether I was going to get back rolling again, but once we turned into the straight he picked up.

“Once he ran second here last year I am sure it was on the Prince and Mr Gosden’s minds to come here again. He had such a good season in Europe last year and this is in Prince Faisal’s back garden, it’s where he lives, so it was a no-brainer. He’s taken on top-class horses from all round the world and proven how good he is.

“Maybe it’s just me, it hasn’t quite sunk in – with that amount of prize-money on offer, it’s a huge deal, but going into the race I didn’t feel the pressure – it was just like going out for a normal race. Once you pass the line it starts to sink in and you realise what a big deal it is. Loads of people have put a lot of hard work and time into this horse, and to be able to repay them all is great.

“My dad (John Egan) is helping out with the Bahrain horses and riding for Fawzi Nass in the mornings, so it is very special to have him here. If it wasn’t for him I wouldn’t be the rider or the person I am today. He’s done everything he can to help me in my career, pushed me and trained me hard. This one’s for him.”

John Gosden, trainer of Mishriff said: “Full marks to my team. I’m here in Newmarket. His owner/breeder always wanted him to come back for The Saudi Cup. He ran well here last year and through the year except for at Ascot on bottomless ground – he didn’t like that ground. Otherwise he has a superb record. The team here did a very good job with him through the winter and then Thady (Gosden, son and assistant trainer) and the team did a great job out there.

“I think there are very few horses that can switch surfaces like that. I would have to say enormous thanks to the whole of the Saudi Jockey Club for putting on such an amazing day’s racing. The turf track is superb – I was blown away by how good it was when it had only been laid down a few months before when I was there last year. And I have always been told by the top American jockeys and by Frankie Dettori that this is the best main dirt sand track in the world, and I think that is very much proven today that a turf horse can actually switch to it. So many of the tracks are too loose with horrible kickback, but this is a very good test for the thoroughbred.”

Asked whether Mishriff will stretch out to 2400m this summer in Europe, Gosden added: “He will stay. I think in the end he nailed them because he could go the pace and then see it out to the end, and that was a hard-run mile and an eighth. We’ll see. Thady will come back with his reports and we will discuss it all with Prince Faisal and take it a step at a time after a flight like that and training through the winter. We’ll see how he is when he gets back before we make any grand plans.”

Ted Voute, representative of owner Prince Faisal: “He was raised on the farm, Prince Faisal bred him. I bought the sire Make Believe as a foal for him. He’s bred the family all through the years and it means a lot to him. He was named after his best friend after he died. It’s amazing.”

Tom Ryan, co-owner, Charlatan, 2nd: “I think he ran a very brave race. It’s a very long stretch and he got ran down on the wire. After this, we’ll look to getting ourselves home and then talk to Bob and the team in the coming days and decide what we’ll do.”

Mike Smith, jockey, Charlatan: “He’s just so lightly raced this year and the way the racetrack was playing all day, I got a little concerned because speed wasn’t holding all day long. He’s only ran once and it was a seven-eighths race. He got really tired. If he’d had two races, I think he’d win. ”

Bob Baffert, trainer, Charlatan: “I was very proud of his effort. Going in, we thought he would run his race. Turning for home, we knew they were going pretty fast early. He’s a fast horse, but that stretch – I’m glad we don’t have any stretches like that in America.”

Alexis Moreno, jockey, Sleepy Eyes Todd, 5th – “I got a little far down on the 700m so I just kept my horse in his place and he did well to finish fifth.”

Antonio Fresu, rider of Military Law, 6th: “He didn’t like the track and was acting different today than at Meydan. It was too deep off the rail and the backstretch he wasn’t really happy. He traveled well for a couple furlongs, then he lost his rhythm and he changed leads a couple times in the wrong part of the race. He hit a flat spot going around the bend. I gave him a kick again in the stretch and when he changed his leads, he came back and got sixth. I want to see him back at Meydan on the big night.”

William Buick, Tacitus, 7th: “He had a good trip. I was with the winner (Mishriff). He travled good. He came under pressure quite early and he had no response to the top three home. I was expecting a bit more of a kick in the straight but he didn’t give it to me.”

Bill Mott, trainer, Tacitus: “He didn’t hold his position turning for home and I could tell he wasn’t going to be up to it.”

Ryan Moore, Bangkok, 8th: “He’s a tough horse, he did his best, but it was a difficult task especially on the dirt.”

Keita Tosaki, Chuwa Wizard, 9th: “He seemed to slip a little bit when he jumped from the gate. He might not handle the surface as well as he did in a gallop a few days ago. He did not move forward as expected.”

Cristian Demuro, Derevo, 10th: “That was a tough race for my horse.”

Hollie Doyle, jockey, Extra Elusive,13th – “He jumped and he traveled beautifully but he just didn’t enjoy the kickback.”