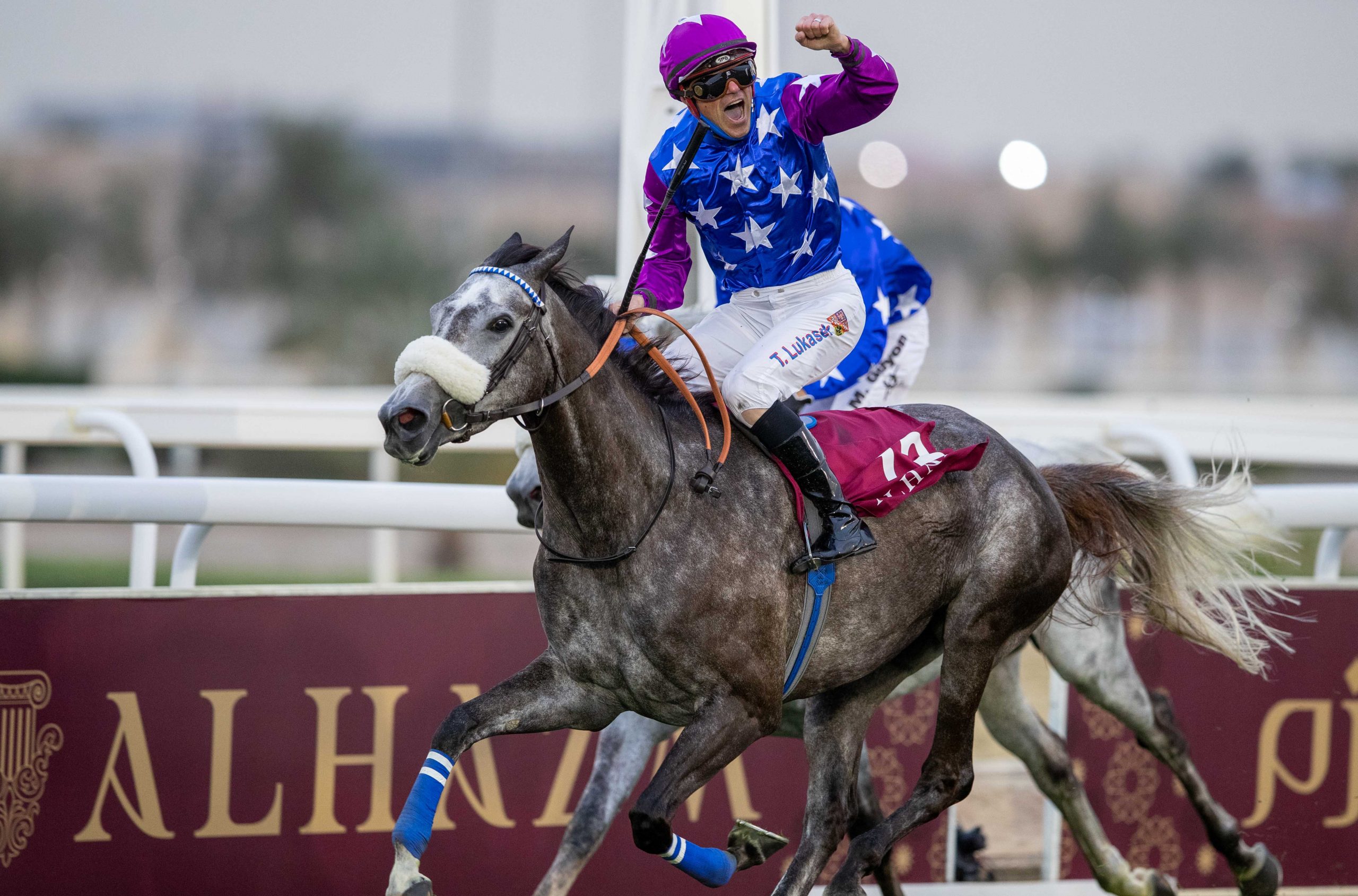 H.E. Sheikha Yasmeen Bint Mohammed Bin Khalifa Al Thani’s MON’NIA (Amer x Margouia) ensured trainer Julian Smart returned to the winner’s circle for the biggest prize in Purebred Arabian racing in Qatar for the sixth straight year as the filly showed some amazing pace coming off the bend, right till the post to land the H.H THE AMIR SWORD (GR1 PA). Smart made it one, two, as the Al Shahania star Ebraz finished second.

In the saddle for Mon’nia was Tomas Lukasek and he directed the filly into midfield even as Umm Qarn’s Bin General and Jabalah set the pace up front early on in the 2400m feature. Mon’nia began her move up on the bend before pulling away. Lady Princess (General x Nacree Al Maury) ridden by Maxime Guyon and trained by Thomas Fourcy, closed the gap but not enough to threaten the leader while Ebraz under Maxime Guyon made his characteristic kick and chased home to land second edging the Julien Auge ridden Lady Princess to third.

The Thoroughbred H.H.THE AMIR TROPHY (QA GR 1) was won by Al Wasmiyah Farm’s NOOR AL HAWA (Makfi x Majestic Roi) continuing with his fantastic season by landing the biggest Thoroughbred prize in Qatar. Unbeaten this season, jockey Alberto Sanna was in the saddle for the Georges Mikhalides trained horse once again and the duo were unstoppable once the 8yo chestnut got going on the home straight, after easing past pacemaker Off He Goes. British contender Berkshire Rocco (Sir Percy x Sunny Again) too upped the pace and gave chase under Jason Watson, but the Andrew Balding trainee couldn’t catch up with the hero who had won a Listed and a Gr2 already this term. At the post, Berkshire Rocco was second two lengths and three quarters behind, while Injaaz Stud’s Hellenistique (Wootton Bassett x Hasturianita) completed the top three for trainer Zuhair Mohsen under Ronan Thomas. 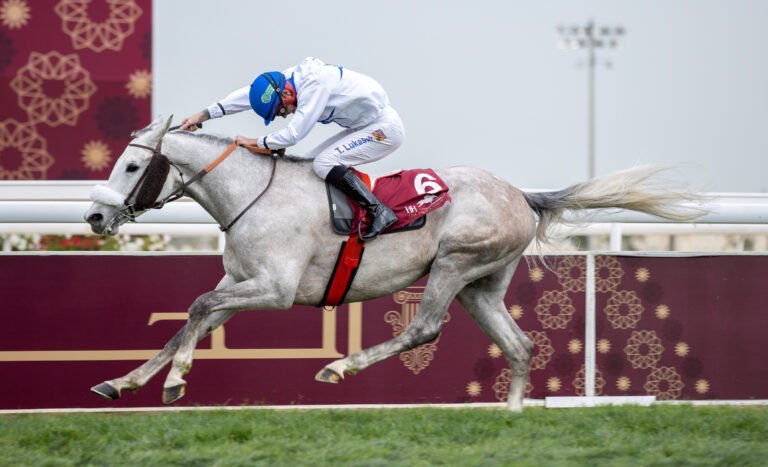 Khalifa Bin Sheail Al Kuwari’s KING PACHA (Acclamation x Regina Mundi) overcame a forgettable start to land the H.H. THE AMIR SHALFA (4 Year Olds & Older Class 1 THOROUGHBREDS – 85 & Above) in scintillating fashion on Saturday. Ridden by Frenchman Julien Auge in the 2,000m race, the Zuhair Mohsen’s ward steadily moved up through the race before taking off from an outside position coming off the bend and then successfully chased down the leaders to follow up two runner up finishes with his fourth overall victory.

Khalifa Bin Sheail Al Kuwari’s DEVIOUS COMPANY (Fast Company x Seren Devious) was first of the two win for the colours on the final day of HH The Amir Sword Festival when the Mohammed Ghazali schooled colt landed the AL BIDDAH MILE (QA Gr 2) (THOROUGHBREDS (Class 1) 3 Year Olds Only) in fine fashion on Saturday. The bay colt had finished twice in the frame since making the move from the UK, and showed nice improvement when moving up to a mile for the first time around Al Rayyan Park. Under Maxime Guyon, the colt beat Tomas Lukasek ridden Pom Malpic by a length.

Osama Omer Al Dafea’s TAXIWALA (Holy Roman Emperor x It’s True) improved his strike rate this term when landing fourth win this season on Thursday. Winner in the Muaither Cup in January and then the Al Shaqab Racing Trophy over the distance earlier this month, the gelding his own under pressure from an Ibrahim Saeed Al Malki trained duo – Zyzzyva and X Force – especially the former. In the six furlong DUKHAN SPRINT (QA Gr 3) (Sponsored by Breeders’ Cup) (3 Year Olds & Older), Alberto Sanna and his mount held a slender advantage at the business end and held on even as Ryan Curatolo ridden Zyzzyva couldn’t find the reserves to put the affair to bed despite breathing down the leader’s neck. 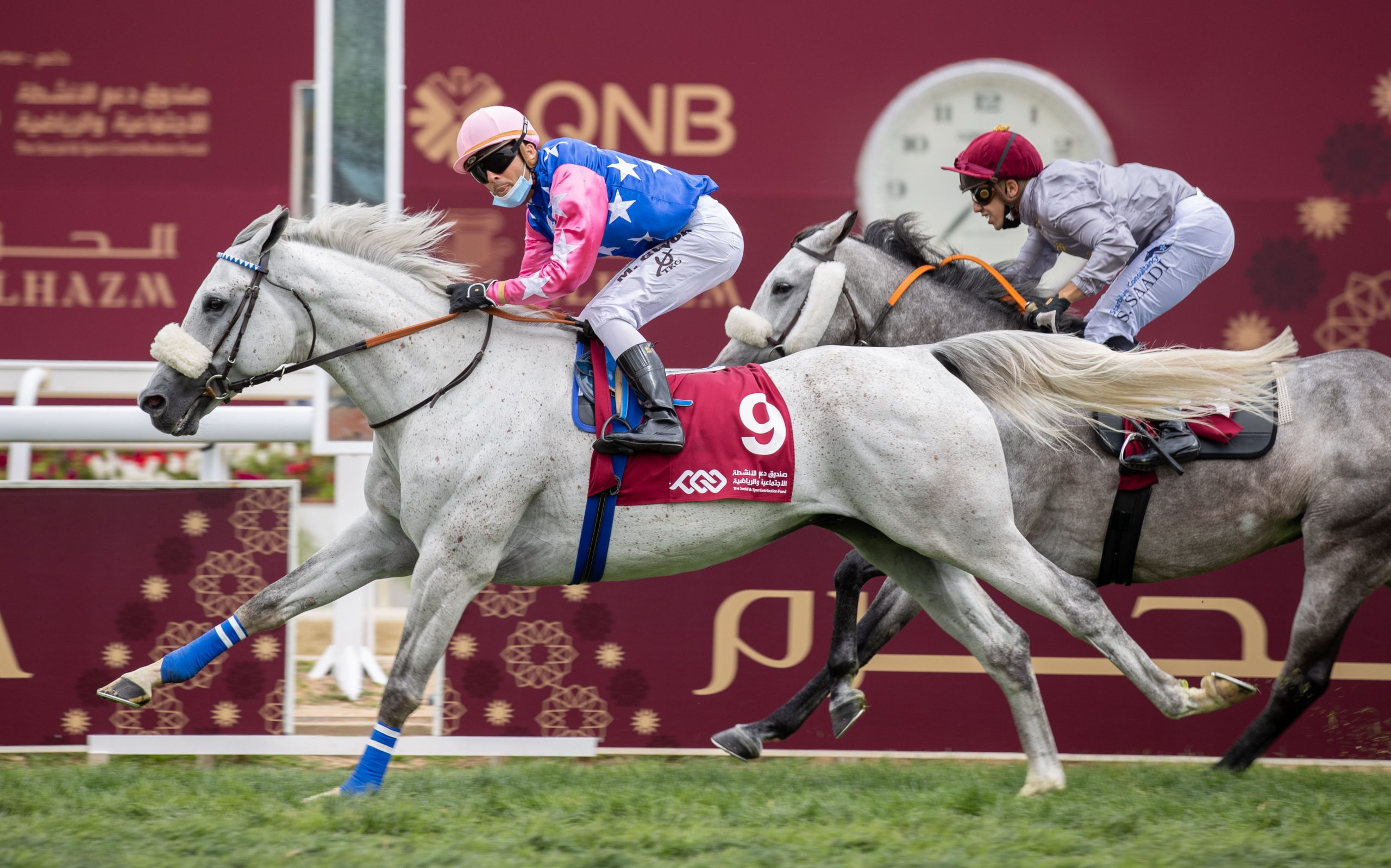 H.E. Sheikha Reem Bint Mohammed Bin Khalifa Al Thani’s METHGAL (TM Fred Texas x Theeba) won the QATAR INTERNATIONAL CUP (GR1 PA)(Sponsored by Daam) (4 Year Olds & Older) for the second consecutive year with a fantastic run down coming off the final bend on Saturday. In the mile long run, the Julian Colin Smart trained 5yo had Maxime Guyon for company, like last year, and the two kicked up the pace on to the home straight and chased down the in-form Al Naama, helmed by Soufiane Saadi, taking a win by three quarters of a length.

Al Jeryan Stud’s AL LUSAIL (Footstepsinthesand x Gooey) went one step better than last year in the AL RAYYAN BREEDERS CUP (LOCAL THOROUGHBREDS 4 Year Olds & Older) to win the 2000m affair in a thrilling contest that went right down to the wire. Helmed by Alberto Sanna, the Hadi Al Ramzani schooled 7yo built on a promising run of results, hattrick on return this term, to embellish the season with a big win. At the post, the bay horse edged out Ronan Thomas ridden Equinoxe by a head.