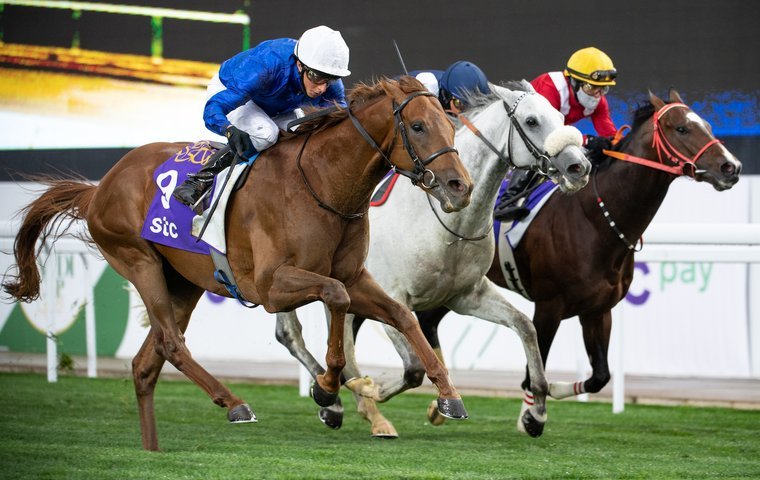 Thursday 28 October, 2021 – The Jockey Club of Saudi Arabia (JCSA) has announced that total prize money for the two-day Saudi Cup meeting on Friday 25 and Saturday 26 February 2022, will increase to $35.1million, making it the most valuable fixture in global racing.

The Saudi Cup, which will be run as a Group 1 for the first time, remains the world’s most valuable horse race at $20million, while five thoroughbred races on the Saturday card have been awarded Group 3 status. Prize money for both the Group 3 Neom Turf Cup and Group 3 1351 Turf Sprint has increased by $500,000 to $1.5million. The Obaiya Arabian Classic, a $2m (corrected) contest for Purebred Arabian horses was this week promoted to a Group 2 race by the IFAHR.

At a series of press events held via video link from King Abdulaziz Racecourse in Riyadh, HRH Prince Bandar Bin Khalid Al Faisal, Chairman of the Jockey Club of Saudi Arabia, spoke of the rapid progression of racing in the region:

“We could never have imagined the immediate impact The Saudi Cup would have on the international racing landscape, or indeed on our domestic racing product.

“In 2020 we launched our first ever international meeting and less than three years later we enter our first racing season as a Part II racing nation, having been promoted by the IFHA earlier this month. We are now looking forward to hosting the world’s most valuable race, The Saudi Cup, as a Group 1 for the first time, as well as five Group 3 races on the undercard.

“None of this would have been possible without the buy in and support of the international racing community and, on behalf of the Jockey Club of Saudi Arabia, I would like to thank everyone within the industry for the way they have embraced The Saudi Cup.

As The Saudi Cup makes advances, so does our domestic racing offering. We continue to focus not only the international aspects of this sport but also understand that building strong foundations upon which a sustainable industry can be built is a vital element to securing the future of this incredible and unique sport for generations to come, both in Saudi Arabia and overseas.”

The highlight on the opening day of the meeting, the STC International Jockeys Challenge (IJC), won last year by Ireland’s Shane Foley, will incorporate a turf contest into its four-race format, while a new international turf race, the Listed Al Mneefah Cup, worth $1million for Purebred Arabians, is also being added.

The JCSA also confirmed some important additions to the list of qualifying races for the undercard contests. The Group 3 Bahrain International Trophy (19 November, 2021) will act as a qualifier for the Group 3 Neom Turf Cup for the first time, as will the Group 3 Challenge Cup at Hanshin (4 December, 2021), with the Group 1 Pegasus World Cup Turf (29 January, 2022) winner gaining an automatic spot in the race.

The Group 2 Hanshin Cup (25 December, 2021) becomes a new qualifier for the Group 3 1351 Turf Sprint, and Nakayama’s Group 3 Capella Stakes (12 December) keeps its place as a qualifying race for the Group 3 Riyadh Dirt Sprint.

Joining HRH Prince Bandar at the launch, Tom Ryan, the JCSA’s Director of Strategy and International Racing, said: “Despite the global challenges, the 2021 Saudi Cup was a huge success, attracting a truly international field. We had a brilliant winner in Mishriff who is the perfect example of the high-class horse the race can attract, and his victory showed how well-placed the race is in the calendar.

“Following his subsequent two Group 1 wins, he has proved to be one of the best horses in the world. We then had Saudi Cup fourth Knicks Go land the Grade 1 Whitney Stakes at Saratoga in August, while 11th placed Max Player was also successful at Saratoga last month in the Grade 1 Jockey Club Gold Cup.

“Several other races from the meeting have also produced Group 1 winners. Earlier this month, Godolphin’s Space Blues, who won the 1351 Turf Sprint, landed the Prix de la Foret on Prix de l’Arc de Triomphe day and even though the UK-trained Oxted finished down the field in the Riyadh Dirt Sprint, it certainly did him no harm as he went on to win the Group 1 King’s Stand Stakes at Royal Ascot just three starts later.

“One of the things we are most proud of at the Jockey Club of Saudi Arabia is the versatility of the racing surface at King Abdulaziz Racetrack. The 2021 Saudi Cup proved conclusively that turf horses can perform on our dirt track and that their form on dirt translates back to turf.

“Mishriff had only run once on dirt before in last year’s Saudi Derby, while this year’s Saudi Derby winner, Pink Kamehameha, had previously only raced on turf in his native Japan. We hope this shows owners and trainers all over the world that they can come to Saudi and compete in both our dirt and turf races.”