5 April 2021, Abu Dhabi, UAE ~ The final fixture of the Abu Dhabi Equestrian Club season on Sunday, 4 April 2021, was highlighted by the 2400m Group 3 Arabian Triple Crown R3 where Ottoman repeated his success from the March 2200m second round. 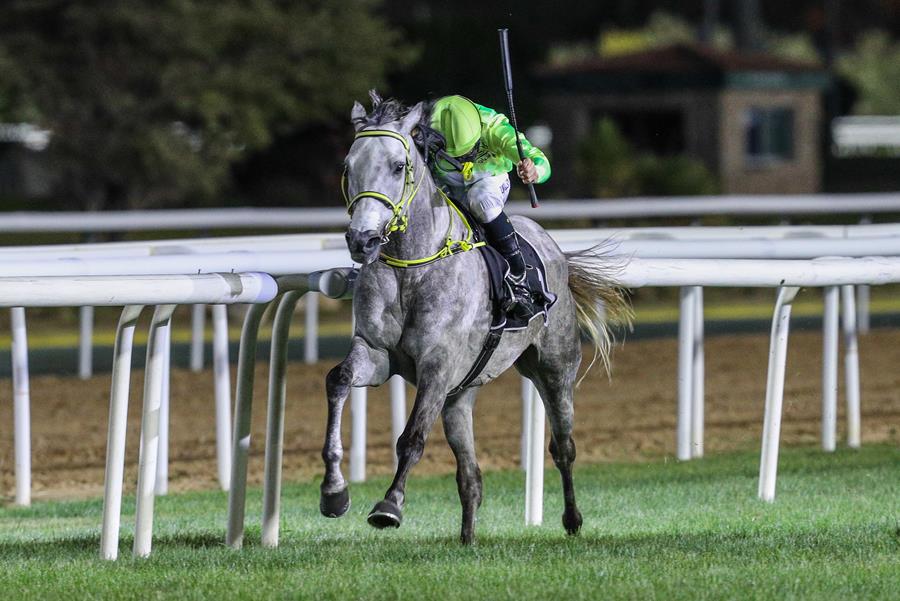 Restricted to the 4-year-old Purebred Arabian Classic crop, it was a courageous performance from the Valiant Boy colt under a penalty for that previous victory.

He was sent straight to the front by Richard Mullen, riding him for the first time, as Adrie De Vries was his March rider. Swinging for home it was clear that they had the majority of their six rivals in trouble before Mujeeb emerged from the chasers to throw down a serious challenge. Every time Mullen asked, his mount responded and he completed a Triple Crown sweep for trainer Abdallah Al Hammad and owners Al Ajban Stables who also won the 1600m first round with Hameem.

Mullen said: “I have had an amazing season in Abu Dhabi this time with plenty of big winners and it is, obviously, nice to add this one to that list.

“Adrie de Vries rode this horse last time, but could not travel tonight, but he told me to be positive and let the horse stride on. He was spot on and it was a great spare ride.

“He was tough out there because 2400m is a long way for these 4-year-olds but he is so tough and genuine I always thought we were holding on.”

The curtain was raised with a 1200m maiden which attracted a capacity field of 14 but only two ever really mattered with Bigorre and AF Asham vying for the lead pretty much throughout.

The latter, a debutant 4-year-old colt, grabbed the initiative shortly after halfway and galloped on resolutely to deny the only rival he probably ever saw, responding gamely to the urgings of Tadhg O’Shea, riding for his main employer Khalid Khalifa Al Nabooda and the owner’s principal trainer Ernst Oertel.

O’Shea said: “We have had to be patient with this horse and the team at Ernst’s have just brought him along slowly and given him plenty of time.

“He is still a big baby because he broke well, but then I had to work hard to get him involved and, even when he hit the front, he had a look but, in fairness, he stuck to his task and we had the job done.”

Connections were soon celebrating a double after the smooth success of AF Alajaj in a 1600m handicap for horses in private ownership. As the owner’s retained jockey, O’Shea actually had no less than seven runners to choose from representing owner Al Nabooda and trainer Oertel and certainly pinned his hopes on the right one.

Settled towards the rear of midfield, the homebred 4-year-old colt made stealthy progress entering the home turn and, once in the straight, sprinted to the front with about 250m remaining after which the race was basically over as a contest.

The colt has now won three of his four starts, twice on the Abu Dhabi turf and, on his previous outing, a 1400m handicap on the Al Ain dirt.

For O’Shea it was an unprecedented 600th UAE winner and he said: “Wow, 600, that is amazing, but as I always say, I have the easy job and just steer them around in a race. It is all the teams behind the horses who do all the hard work.

“Now I am riding mainly for Ernst and his team, Karl his brother back at the farm does so much good work and all the staff. I have a great job for Mr Al Nabooda and this is an exciting horse, both on turf and dirt. I think he has a big race prize in him.”

The better of two 2200m handicaps may have only attracted six runners, but was a closely fought affair with Waadh and Richard Mullen trying desperately throughout the final 300m to get past early leader AF Sanad who refused to be headed and just kept finding more for Bernardo Pinheiro in a truly gutsy performance.

Owned and trained by Khalifa Al Nayadi, the 8-year-old gelding, incidentally bred by Al Nabooda, has now won six times, four on the Abu Dhabi turf, highlighted by the 1600m Shadwell Gold Cup, a Prestige contest, last January. Ridden by Pinheiro on that occasion also, this was the gelding’s first win since.

Pinheiro said: “Three years ago this horse was my first ever UAE winner and I won a Prestige race on him last season, so he means so much to me.

“We looked at the race tonight and we thought there was not going to be much pace, so we decided to set the pace and then, when I asked him in the straight, he just kept finding more. I am so happy!”

A lesser 2200m handicap looked wide open on paper and so it proved with the vast majority of the capacity field of 14 in contention entering the short Abu Dhabi straight.

However, it finally appeared to be won quite cozily by Gurm, confidently ridden by Antonio Fresu for Eric Lemartinel in the colours of HH Sheikh Khalifa bin Zayed Al Nahyan.

Virtually last throughout the opening stages, Fresu crept closer leaving the back straight before unleashing his mount leaving the home turn, the pair hitting the front in the final 150m and never in danger thereafter, despite winning by only a neck.

The homebred 5-year-old gelding was doubling his career tally and adding to a course and distance maiden success on his penultimate start, the only time Fresu had previously ridden him.

Fresu said: “He could be a nice horse for next season. He ran ok on dirt last time, but I think the turf really suits him. He stays well, but is still a bit immature and, once in front today, was a bit lazy. I think we won with a bit in hand.”

The curtain came down on the season in the capital with the only Thoroughbred race on the card, a 1600m handicap and another race with a capacity field that was actually win stylishly. On this occasion it was Zaman who landed the spoils, flying home under Fernando Jara to snatch the prize in the final 125m for Ahmad bin Harmash and owner Abdullah Menahi.

A 6-year-old gelded son of Dutch Art, it was a fourth career success but first for current connections and since leaving the Charlie Appleby arm of Godolphin. His third and previous victory was in the Listed Meydan Classic, over 1600m on the Meydan turf, in March 2018.

Jara said: “I must admit at halfway I thought I was in trouble, but over the last 400m he has really picked up well and, in the end, has won that well.”