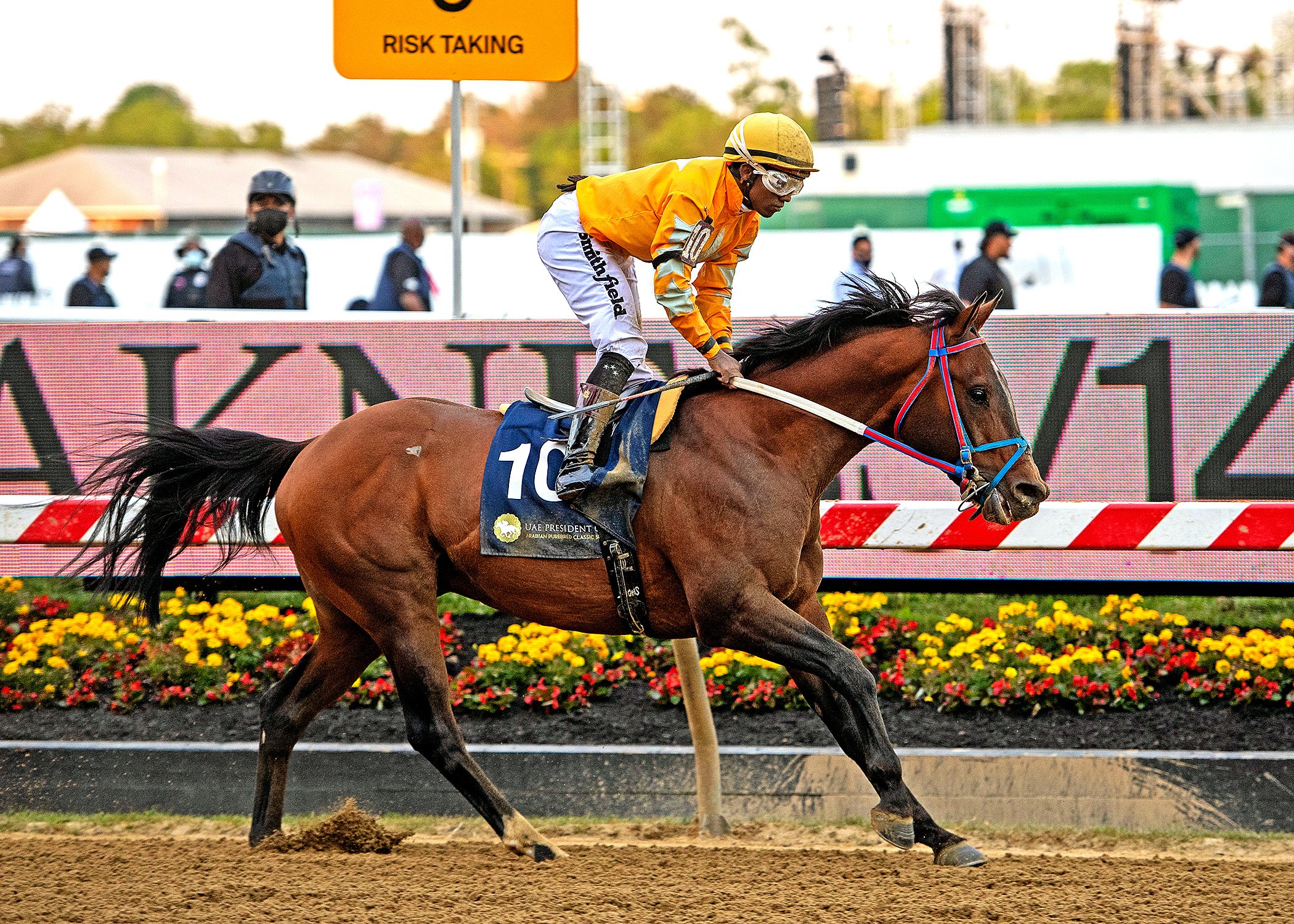 18 May 2021, Aurora, CO., USA ~ The $100,000 UAE President Cup (G1) – America’s richest Arabian race of the year – rounded out a spectacular day of stakes racing on Pimlico’s Preakness Day card on Saturday, 15 May 2021, in Baltimore, Maryland. And once again, Paddys Day made for an unforgettable race, upholding the status of this traveling star as he cruised to victory in similar fashion of ease as last year. Paddys Day has now won this race a total of three times in his career, including 2016 at Churchill Downs and 2020 at Pimlico Race Course.

The seasoned 10-year-old bay stallion, now boasting lifetime earnings of $749,925 (and well over $1.5 million if one includes his bonuses earned from the Sheikh Zayed Bin Sultan Al Nahyan Cup Triple Jewel series), broke from post position #10 in the 12-horse field, and seemed content to cruise mid-pack for the first half of the 1 1/16 mile race. But it all changed around the ¾ mile pole when Paddys Day’s impressive closing style began to show. Guided by jockey Ricardo Santana Jr., Paddys Day found room on the rail and began to swallow up the more than ten lengths between him and the leader, Quick Sand AA. Paddys Day drew away near the sixteenth pole to win by 3 ¼ lengths with a final time of 1:54.65 in a display of heart and gutsiness that he’s well known for. RB Rich Lyke Me came in second for owner/breeder RoseBrook Farm. Quick Sand AA finished third, followed by Uptown Cruisedirector for fourth, in a large and highly competitive field of twelve horses vying for victory in what is arguably considered the most significant race of the year for USA Arabian racing.

The field consisted of the nation’s top Arabian race horses including:

Paddys Day boasts impressive stats. He is 2-for-2 in 2021 and the race marks his 51st start in a storied career that spans eight years and 12 different tracks on two continents. He boasts a record of 51(30-10-2), including twenty-two Grade 1 stakes… 10 of which he won. 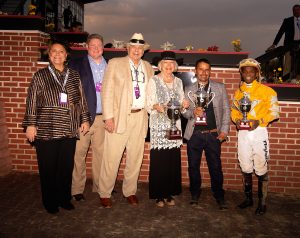 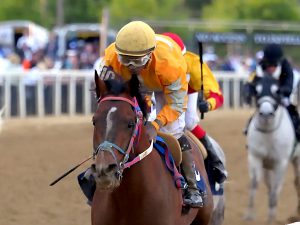 “We are truly blessed to have had him in our lives for ten years,” said his owner/breeder, Jane Teutsch. “He has given us such joy. The track vet told me after the race that it was her pleasure to have examined him every day [upon his arrival to Pimlico] and see such a healthy, happy horse, especially at ten years old. We couldn’t be more thrilled.”

This was Paddys Day’s first win under trainer Ramon Aguayo.

The race marked the third time purebred Arabian horses ran at the world-famous Pimlico Race Course on Preakness Day. The race was also held on Preakness Day in both 2012 (won by TM Fred Texas) and 2020 (won by Paddys Day). Last year’s running was in October in front of an empty grandstand due to Covid-19 restrictions. This year was markedly higher energy, as the track welcomed 10,000 spectators back to the track.

“We owe so much to our sponsor, the UAE President Cup, for offering this prestigious race in America as part of its long running series,” said Susan Meyer, president of the Arabian Jockey Club. “A special thank you also goes out to the Maryland Jockey Club and Pimlico Race Course for hosting this race on Preakness Day. We are made to feel so welcomed and a true part of this historic event. We look forward to continuing the partnership and continuing to highlight the best in Arabian racing.”

Presented by the UAE Ministry of Presidential Affairs, the UAE President Cup Series is the longest-running Arabian race series in the world. It began in 1994 and was the first series to visit France, the United Kingdom, Belgium, Holland, Germany, Ireland, Morocco, Egypt, Canada, Switzerland, Sweden, Denmark, Turkey, UAE, Russia, and the United States. This race at Pimlico marks the 15th time it has been run in America, with plans to return in 2021.

“Having been Chairman of the International Federation of Arabian Horse Racing (IFAHR) for the last three years, I see Arabian racing worldwide entering a Golden age as the annual number of foals grow, the number of yearly races grow, and prize money across the industry grows,” said H.E. Faisal Al Rahmani, Chairman of the UAE President Cup Committee. “This is an exciting time for Arabian racing.

The 2021 UAE President Cup (G1) at Pimlico handled over $2.3 million, a record handle on a single Arabian race.