15 June 2022 ~ The Arabian Racing Organisation (ARO) is thrilled with the top class entries for the Qatar International Stakes, a Group 1PA run over a mile as part of the Qatar Goodwood Festival on Wednesday, 27 July. The £400,000 race is the most valuable Arabian race in the UK and the most valuable race over a mile for Arabians in Europe. The race has seen many of the highest rated Arabians in the world compete and win such as Al Mourtajez, Muraaqib, Tayf and Lady Princess, as well as Ebraz, the only horse to win it twice.

2021 winner, Lady Princess, has rounded out her racing year, finishing second in the Qatar Arabian World Cup in Paris, then winning the Sheikh Zayed bin Sultan Al Nayhan Jewel Crown in Abu Dhabi in November, and the HH The Amir Sword in Qatar making her the highest rated Arabian mare in the world. Trained by Thomas Fourcy for Khalifa bin Sheail Al Kuwari, the diminutive mare has now won six top level races and has not finished out of the first three in her 14 starts, the majority of which are all black type races. 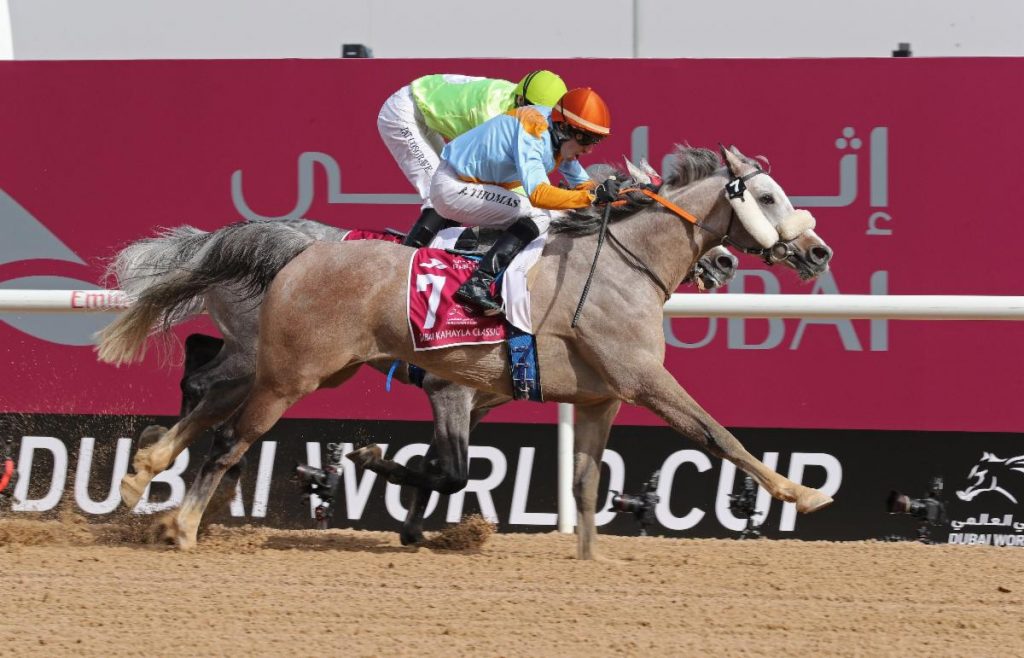 Also in the list is the American-bred First Classs, who has joined Jean de Mieulle from his uncle Alban de Mieulle for a European campaign. The five-year-old son of Dahess had a fantastic winter in the Gulf, winning the Qatar Derby for four-year-olds in December and then raised the bar in Saudi Arabia winning their first $1million dollar Turf race for Arabians, the Al Mneefah Cup. His star continued to shine in Dubai when he gained his first Group 1PA win in their premier race, the Kahayla Classic in March. Leased by Nayef Saad bin Sharida Al Kaabi from his US breeder’s Cre Run Farm, First Classs appears equally effective on turf or dirt.

Third highest rated is Hattal, trained by Xavier Thomas-Demeaulte for YAS Horse Racing Management. The six-year-old son is bred in the purple being by their leading stallion Mahabb out of their Kahayla Classic winning mare Mizzna. He has five Group 1 PA wins to his name, including the UAE President Cup-UK Arabian Derby at Doncaster in 2020.

Mwarid is one of two representatives from Al Shaqab Racing who first won this race in 2016 with Al Mourtajez. The six-year-old is also beautifully bred by world champion sire Amer out of their first Group winner Al Nachmiya. His three wins this winter include the Late Sheikh Jassim bin Mohammed Al Thani National Day Trophy and was last seen finishing second to Lady Princess in the HH The Amir Sword. He is trained by Eric Lemartinel who has enjoyed a fine debut season in Qatar, finishing tenth in the trainer’s championship. Their other entry Aajel, is a lightly raced four-year-old who was Group 3PA placed on his latest start and is trained by Thomas Fourcy.

Francois Rohaut, who trained Muraaqib to win in 2017, has entered two, Samlla and Djafar. The Al Shahania bred Samlla runs in the colours of HE Sheikha Reem bint Mohammed bin Khalifa Al Thani and is a dual Group 1 winner, scoring in Deauville’s Al Rayyan Cup (Prix Kesberoy) and has since won the Qatar International Cup over this distance as part of this year’s HH The Amir Sword Festival. Third in that race was Djafar who earlier in the Qatar season had won their Guineas and now joins Rohaut from Gassim Ghazali, carrying the colours of Abdullah bin Fahad Al Attiyah.

Also entered from France is Ghurat Al Zaman. She is a daughter of her owner-breeder Dr Al Nujaifi’s multiple Group 1PA winning stallion Hilal Al Zaman who has been having a fantastic season around the globe. This year the penny seems to have dropped with this progressive mare who has won black type races at this trip and further for trainer Damien de Watrigant, who also trained her sire. Entered from Sweden is Djelano owned and trained by Maria Hagman-Eriksson and the winner of the Wathba Stallions Sprint Cup, a Listed PA contest on the dirt at Jagersro last October.

The domestic challenge is also strong with the UK’s highest rated mare Bayan Athbah seeking to add to her two Group 1PA wins of 2021. Trained by Phil Collington for her breeders Athbah Stud, her stablemates Ekleel Athbah and Rebal Athbah who have both won this season, also hold entries. Five-time leading ARO trainer James Owen also has three entries headed by Al Kaaser who was sixth last year, along with Al Mahbooba and recent winner Balqees for Gary Allsopp who is new to Arabian racing. Leicestershire based handler Peter Hammersley also has two entries, Zayin Arabian’s Zayin Angkor Centurion who has twice contested the race before and Dilmun Racing’s Abiyah Athbah who was sixth in 2020.

HE Issa Bin Mohammed Al Mohannadi, Qatar Racing and Equestrian Club Chairman commented: “We are proud of our sponsorship of the Qatar International Stakes as one of our most valuable races and part of our commitment to promote Arabian racing. We are very pleased to see this race, once again, attracting some of the world’s top Arabians and promising to be a fabulous addition to the Qatar Goodwood Festival. I’m sure fans of all forms of racing will be fascinated by the spectacle of the Arabian horses at Goodwood. QREC would like to thank ARO and Goodwood for the excellent coordination and cooperation.”

Genny Haynes, ARO Chief Executive Officer commented: “The Qatar International Stakes never disappoints in terms of the quality of horses it attracts, as you would expect with the very generous prize money on offer. Year after year is it an absolute privilege to see some of the world’s best Arabians compete in this race and showcase our sport to a wider audience.

“ARO is extremely grateful for the ongoing support of UK Arabian racing by Qatar Racing and Equestrian Club, who have been sponsoring this race at the Qatar Goodwood Festival since 2015.”

Concluding she said: “As a Group 1 race it is an early closer, so we will be accepting supplementary entries until 18th July. We would also like to thank the British Horseracing Authority and everyone at Goodwood and Fontwell racecourses for their assistance, in particular with our overseas runners.”