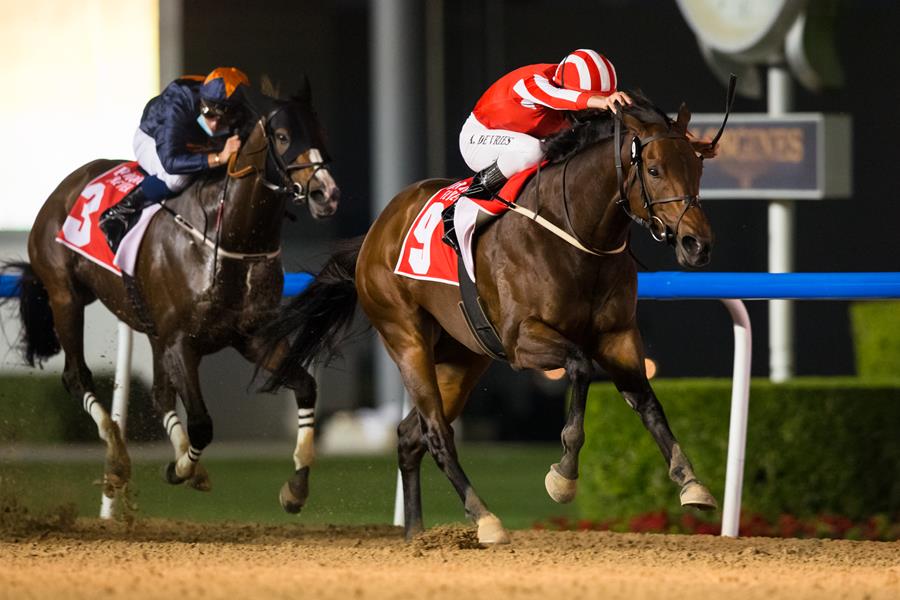 11 February 2021, Meydan, UAE ~ RB Money To Burn ridden by Tadhg O’Shea took command to win the 1600 Mazrat Al Ruwayah Sponsored By Arabian Adventures as the first race at the Meydan track on 11 February 2021. The race is the fourth in the Dubai World Cup Carnival series.

Money to Burn (MAJD AL ARAB (GB) x RB Burn Baby Burn (US) by TH Richie (US) is trained by Eric Lemartinel for owner Shkha Alyazia bint Sultan Al Nahyan. The six-year-old was having her first win in 2021 after a disappointing run a month previous at the same location.She has now won four of her six starts on dirt, with a pair of turf victories, from five runs, giving her an impressive CV. On a mount renowned as a trailblazer, O’Shea was happy to bide his time, settling the mare behind RB Kinetic, before setting sail for home about 600m out, settling the race in a few strides.

Tadhg O’Shea said: “She is a very good filly, and she lost her way a little in the last run. I was drawn wide on her tonight and the plan was just to give her a little chance. She is naturally very fast. She settled well, she is a high class filly, and the Al Asayl team have got her back on track.”

Eric Lemartinel said: “We agreed (with Tadhg O’Shea) that we would not push her to the front and let her travel well out of the gate. We are hoping to keep her fresh, and in that time we expect she will get in better shape, and the final objective is the Kahayla Classic for her.”

Harry Bentley guided Spaghetti as they blasted past the slowing RB Torch under Fabrice Veron to finish second in the final yards. Win time was 01:46:56.