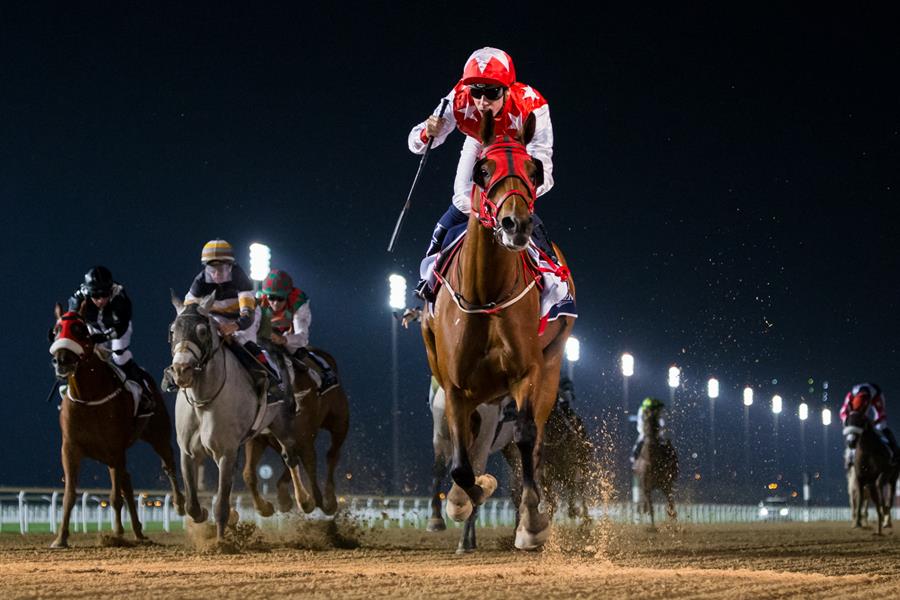 6 January 2021, Dubai, UAE ~ Racing at Meydan on Thursday evening, the first UAE race meeting of 2021, is a six-race card sponsored by pillar partner Longines. The two features for the night are the opening round of the Purebred Arabian Maktoum Challenge and the UAE 1000 Guineas Trial for 3-year-old Thoroughbred fillies.

The 1600m Group 1 Al Maktoum Challenge R1 presented by Longines has attracted a quality field of 15, including last year’s heroine RB Money To Burn who was never headed on that occasion under regular jockey Fabrice Veron. Trained by Eric Lemartinel for Sheikha Alyazia bint Sultan Al Nahyan, the 6-year-old mare has not won since, but has not been beaten by far in any of her three subsequent outings. Drawn in 14 of 15 runners may not be ideal given her positive racing style.

Veron said: “She is a mare we know likes the conditions, seems in good form at home and we hope is going there with a big chance in a good renewal. Obviously, we would have preferred to be drawn lower, but she normally breaks well and has plenty of speed, so hopefully we can overcome that.”

After winning thus 12 months ago, Lemartinel’s mare then chased home AF Alwajel in the 1400m Group 2 Liwa Oasis on the Abu Dhabi turf. Trained by Ernst Oertel for his main patron, Khalid Khalifa Al Nabooda, AF Alwajel, a homebred 6-year-old entire landed the Group 3 National Day Cup on his latest outing over 1600m, also on the grass in the capital.

He is the choice of the owner’s retained jockey, Tadhg O’Shea, leaving Gerald Avranche the spare ride on classy stable companion AF Al Sajanjle who has yet to fire in three starts this season.

Pinheiro said: “He is a great horse and a pleasure to be associated with. He has done nothing wrong, especially on dirt, so we are really looking forward to it, but it is obviously a strong race.”

A two-time winner at Al Ain for conditioner Ahmed Al Mehairbi, Dagui Lotois will be ridden by Antonio Fresu who said: “I believe I have a good chance with Dagui Lotois in the Group 1 Al Maktoum Challenge Rd 1 at Meydan.”

Over 1400m, the UAE 1000 Guineas Trial has a strong Godolphin representation with five of the 11 3-year-old fillies set to carry the world-famous royal blue silks.

These include one for Charlie Appleby, Lookingtotherainbow, one of two rides on the card for William Buick, riding in the UAE for the first time since Super Saturday. A homebred daughter of Dubawi, she lost her maiden tag at the third attempt, in a 1400m juvenile fillies’ novice stakes on the Kempton all-weather in October, her most recent racecourse appearance.

Appleby said: “She has settled in really well and been enjoying the Dubai weather. Her work has been good, and she is by Dubawi whose progeny normally go well on the Meydan surface, so hopefully she has a good chance.”

Also, for Godolphin, Saeed bin Suroor saddles four. On official ratings Soft Whisper, winner of half her four starts, her two most recent outings in 1600m nurseries (juvenile handicaps), may be the main hope. That said, stable companion Final Thought is due to carry the blue cap, the first Godolphin silks.

The Meydan turf is also in use for the first time this season with competitive handicaps over both 1800m and 1000m. And the turf track is not the only welcome return to Meydan racing: