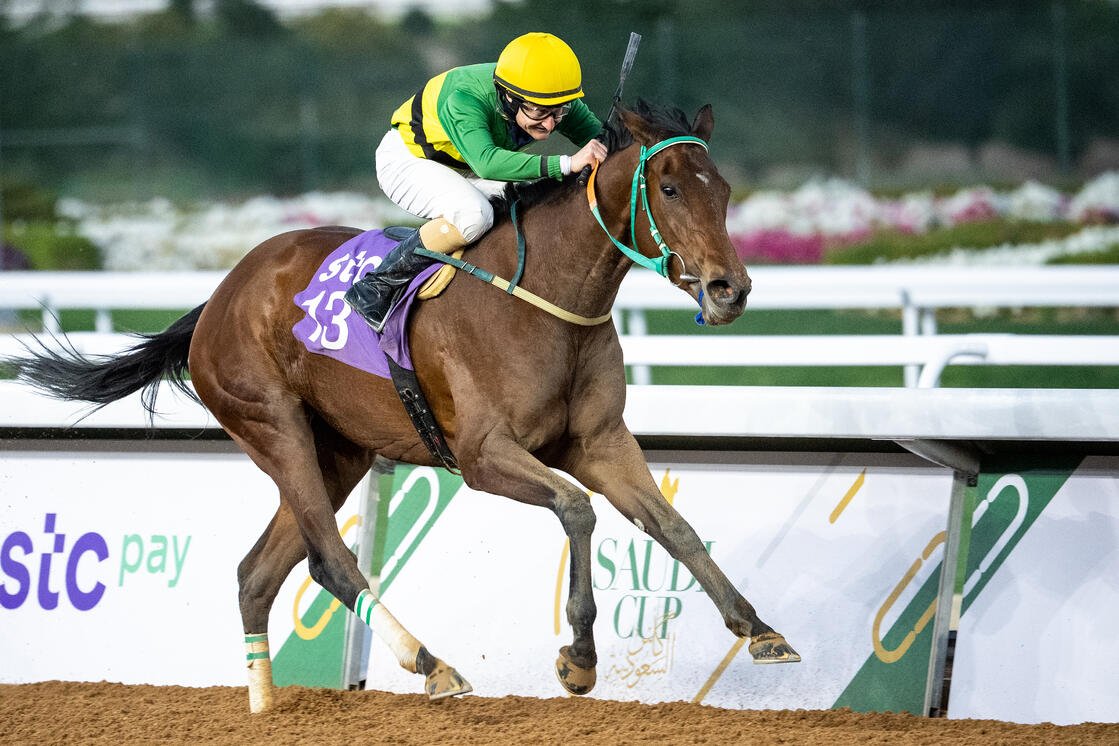 19 February 2021, Riyadh, Saudi Arabian ~ Irish star Shane Foley emerged triumphant in the second stc International Jockeys Challenge after taking two out of the four legs, each worth US $400,000, in the competition.

Fourteen internationally-renowned male and female jockeys from all over the globe took part but it was the Classic-winning Foley, who rides for trainer Jessica Harrington in Ireland, who took Friday night’s honours, however, with a total of 30 points for his two wins.

He said: “It’s massive to win this. It’s a nice break and during a quiet time for us during the winter, so it’s nice to get away and get the opportunity. We have a runner tomorrow (Barbados in the Red Sea Turf Handicap), but these challenges are important for young jockeys to get noticed around the world and hopefully it might open a few doors somewhere else.

“We have all-weather racing back home, but it’s nothing like the dirt (track) is here. I’ve ridden in Japan for a couple of winters and ridden in America and it’s nice, it’s different (to ride on dirt).

“It’s great to win and obviously can’t do my career any harm. I have a fantastic job at home and Jessica Harrington is a great person to work for who has a fantastic team of horses, so it’s all good.

“Pat (Smullen, nine-times Irish champion jockey, who died last September) was massive and traveled and won races all around the world – here, Dubai, everywhere. He would probably be here instead of me representing Ireland if he were still around. He was a fantastic man who’s left a big legacy and big boots to fill behind, so we’re all trying our best.”

The 32-year-old scored in the stc cloud-sponsored second leg on Emblem Star and prompted joyous celebrations among owners Albayraq Stable in the winner’s enclosure when the 4-year-old Take Charge Indy colt crossed the finishing line four lengths in front of his rivals.

Foley fired in the second part of his double when the 5-year-old filly Motawariyah was another wide-margin winner in the stcpay instant-sponsored third leg of the competition.

“It was such a privilege even to be invited here but to be competing and winning – it’s the sort of thing you strive for,” said the delighted Irishman. “It’s a fantastic racetrack and it’s brilliant to be here.”

lfouraidi said: “It means a lot to me. I am one of the Saudi riders and they are all going to be happy for this win, all the Saudi jockeys. She’s a good filly and she gave me a lot of help throughout the race. We were all together but I am thanking God that I was able to win it. For me, this is a dream come true.”

He finished second in the jockeys challenge with 25 points – as well as his win, he picked up second place and therefore 15 points in the second leg – with Mike Smith third on 19 points.

The US Hall of Fame jockey Smith, known as ‘Big Money Mike’ took an early lead in the challenge when he snatched the first leg, sponsored by stc dare, on Mortajeh, having replaced John Velasquez.

Smith, who has a record 26 Breeders’ Cup successes to his name and who won the American Triple Crown in 2018 on Justify, said: “They told me Mortajeh was quick and to use it to my advantage. I was called in to substitute at the last minute so I didn’t know much about my mounts today, but sometimes when you don’t know things, it works out better. It’s great.

“I had a great night last time I was here on a Friday night (in 2020). It was so much fun and I wanted to do it again and look, I end up taking Johnny’s spot and I was blessed enough to win.”

He continued: “I tell you, I enjoy riding here, I really do. I know I made a few
mistakes and I had to pay for them last year and rightly so, but it’s good to come back and try to redeem myself and we will see what happens.

“Lessons learned. You learn from big things like that and I learnt a big lesson and I humbled myself a whole lot and then I am ready for tomorrow. I’m very happy to be back and I’m happy to be back with a horse that has an abundance of talent.”

Japan’s Nanako Fujita and Sweden’s Malin Holmberg tied for fourth with 12 points, and Jessica Marcalis took sixth for Italy with a tally of 11 points.

All the riders, who included the great Frankie Dettori, were delighted to take part in the competition.

Fujita said: “It was a lot of fun. I’m disappointed I didn’t win but I hope to be back so I can get revenge.”

Italian jockey Jessica Marcialis said: “It was amazing. The first race was different, it’s a style that suits the American jockeys not the Europeans, but in the second race I thought ‘I understand’. I didn’t know where I was in the competition but I finished with a smile.”

British superstar Hollie Doyle added: “The track rode nice, the kickback was not as bad as you’d expect it to be and it isn’t as deep as it looks, either. Obviously I didn’t have much luck tonight but it was a good experience.”

Last year’s winner, Switzerland’s Sibylle Vogt, said: “It wasn’t the same as last year but I’m really happy I could come again. I think I did get a third and a sixth but it wasn’t for the points. I just wasn’t as lucky as last year.”

Brazilian legend Jorge Riccardo said: “This has been a great experience. I am very impressed with the people here who are so nice. The track is spectacular. For me it is one of the best I have ridden on. I have been to many places like France, Brazil, Peru, Chile, the United States, but this is a great track.

“The people are so nice, so friendly and welcoming. I really enjoyed myself here. I am very pleased to have been here. It was very much worth coming here.”