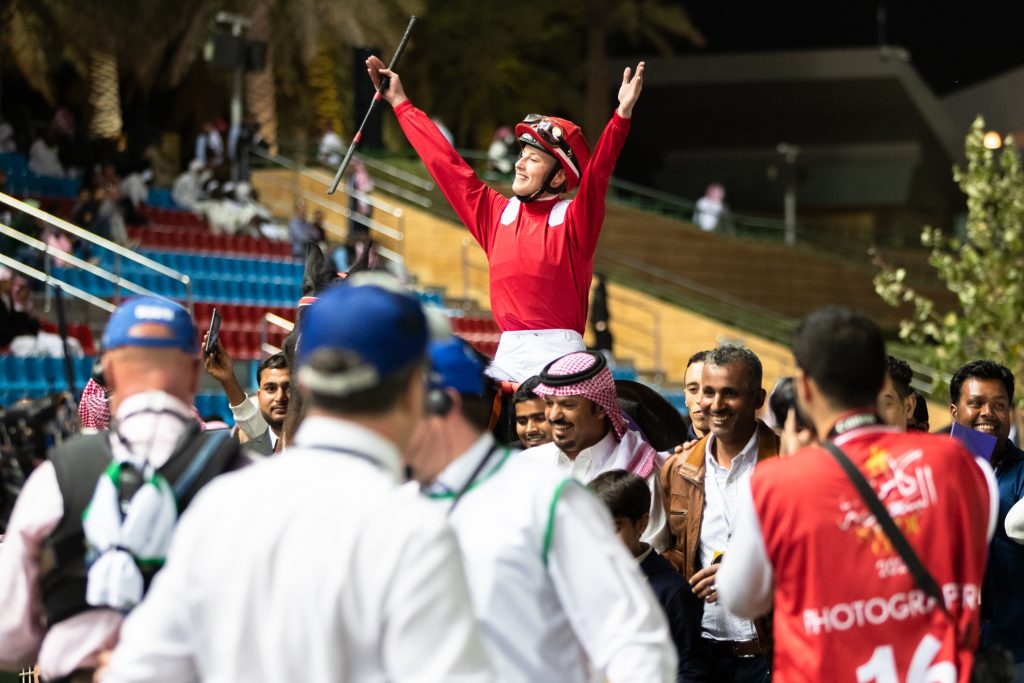 12 January 2021, Saudi Arabia ~ Swiss rider, Sibylle Vogt celebrates after winning a race in the stc International Jockeys Challenge at The Saudi Cup 2020. She will return to Riyadh to defend her crown on Friday February 19, 2021.

Sibylle Vogt has been named as the first rider to sign up for the stc International Jockeys’ Challenge in February’s glittering Saudi Cup meeting.

The 25-year-old Swiss jockey made history when beating some of the world’s top riders, including Frankie Dettori, Yutake Take and Olivier Peslier, to win the first competition in 2020.

New Zealander Lisa Allpress won the opening race of the competition to become the first female jockey to win a race in Saudi Arabia, but Vogt was declared the overall winner of the points-based contest having also been successful in one of the four races.

Vogt said: “It’s a huge honour to be invited back to take part in the International Jockeys’ Challenge.

“It was such a good experience and it’s so nice to look back on it. It was an indescribable feeling to beat some of the best jockeys in the world last year – especially Frankie Dettori, as he is one of my idols and he will stay that way.

“I was very excited to be asked to take part because I had never been in such a big competition before. It was great getting to know all those successful jockeys.

“The whole thing was really well organized. The course was well maintained and the track is very fair to ride. I’m really looking forward to this year.”

Since winning the stc International Jockeys’ Challenge, Vogt’s career has continued to flourish. After a successful season riding in Germany, she was snapped up to ride as second jockey for Arc de Triomphe-winning trainer Peter Schiergen next season.

Vogt added: “The victory in the Jockeys’ Challenge helped my career a lot as my name was often in the media and people saw that women could also be successful.

“I think it helped me to integrate into an internationally-successful stable like Peter Schiergen, because it showed that I can perform well on new tracks and under new circumstances.”

The full line up of jockeys for the competition will be revealed in the coming weeks.
~ Saudi Cup