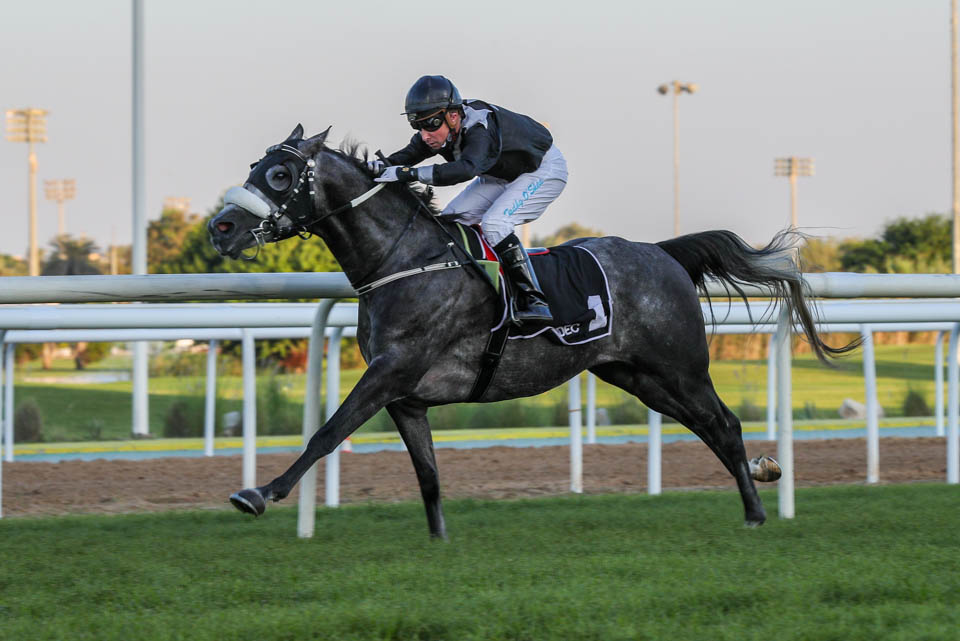 15 November 2020, Abu Dhabi, UAE ~ The second meeting of the new season at the Abu Dhabi Equestrian Club on 15 November 2020 was kicked off with a 1200m maiden win by the always respected trio of Champion Owner, Khalid Khalifa Al Nabooda, his retained jockey, champion Tadhg O’Shea and main trainer, Ernst Oertel. These three pros landed the spoils courtesy of AF Majalis (AF ALBAHAR (AE) x Khute (FR) by Djouras Tu (FR)), opening his account at the fourth attempt on his seasonal debut. Having just his fourth career start after three efforts, all at Abu Dhabi last season, the homebred 4-year-old colt was either first or second throughout before grabbing the initiative early in the straight and staying on strongly to post an easy victory.

Oertel said: “He is a very nice horse and I must admit coming here we were very hopeful he could win today and he certainly has not disappointed us.”

O’Shea added: “All credit to the trainer who convinced me to stay loyal to this one over AF Mohanak who finished third. This horse has certainly improved from last season, mentally and physically. He has plenty of speed and it all worked out well.”

Foaled in the UAE

For 3-year-old colts and geldings foaled in the UAE, a 1400m maiden went to debutant Sawt Assalam (Mahabb (AE) x PRIME D’OR (FR) by Dormane (FR)), a homebred confidently ridden by Szczepan Mazur for Ibrahim Al Hadhrami. Sporting the silks of Ben Shahwan Arabian Stables, the colt was sent straight to the head of affairs by Mazur and, apart from a brief challenge by O’Shea and eventual runner-up AF Al Ahkaf, never appeared in any danger.

Mazur said: “This is a nice horse and he has done that very well. Obviously it was only his debut, so you would like to think, he is going to improve from that.”

An identical race, but for fillies appeared pretty mundane on paper, while actually producing a great finish with long-time leader AF Kharissa overhauled about 30m from home by Rawat Al Reef that was then, as the winning post approached, denied by Foah (NIESHAN (FR) x RICHLY BLESSED (US) by TH Richie (US)), the three debutantes serving up a thrilling spectacle. Trained by Eric Lemartinel for Sheikha Alyazia bint Sultan Al Nahyan, the homebred filly was settled in midfield early on before making relentless progress in the straight and then delivered with a perfectly timed challenge by Fabrice Veron.

Veron said: “I had to push her quite early on because she was quite green and, basically, a baby, so she will certainly progress from that.

“At home, she has been galloping nicely in the mornings, so I actually thought she would be more educated which offers hope for the future.”

They appeared to go very fast from the outset in a 1400m handicap for horses in private ownership which seemingly suited Faiza able to overcome the burden of joint top weight. A 5-year-old mare trained by Ali Rashid Al Rayhi for Jumaa Mubarak Al Junaibi, she was doubling her career tally and has now won thrice, having also scored in a handicap, over this Abu Dhabi 1400m, for Paiva in February. She lost her maiden tag over 1600m on the Toulose turf in her native France in April 2019.

Settled in midfield here, she made smooth progress on the home turn, soon hitting the front and Paiva said: “I was actually quite excited to be back on her in a race, especially over this course and distance, because I know it really suits her.

Italian jockey Antonio Fresu endured a frustrating start to the season, forced to miss the first fortnight having tested positive for Covid-19, but has soon been back in the winning groove, following a Friday Jebel Ali winner with another success, this time aboard US-bred RB Dixie Honor (MAJD AL ARAB (GB) x RB Dixie Diva (US) by Burning Sand (US)) in a 1600m handicap. Fresu raced in second until entering the relatively short Abu Dhabi straight at which point he sent his mount, a 5-year-old mare, for home in what proved a race winning move. Saddled in Al Ain by Helal Al Alawi, it was actually a maiden victory for the mare, raced by National Stables, the base from which Al Alawi trains. It was a win at the eighth attempt for the mare and fifth for a horse carrying the owner’s silks.

Al Alawi said: “Her best previous run was here at Abu Dhabi when 2200m probably proved too far. She had a lovely low weight today and, luckily, has taken full advantage.”

The sole Thoroughbred race on the card, a 1600m rated conditions stakes, which appeared a strong heat and was won, relatively comfortably, by Boerhan.

Seen by most as a prep for the Listed National Day Cup, over the same course and distance on the first Friday in December, the contest attracted a quality field. Victory ultimately proved fairly straightforward for Boerhan, settled in midfield by Ryan Curatolo before switching wide at the top of the straight to deliver a telling challenge down the centre of the track. They swept past Wasim in the final 100m to win going away, ultimately posting an impressive victory for trainer Nicholas Bachalard and his main patron at Jebel Ali Stables, Sheikh Ahmed bin Rashid Al Maktoum.

A 4-year-old gelded son of Sea The Stars, having his first outing since that trip to the vet and leaving William Haggas, he was doubling his career tally on his local debut and first racecourse appearance since August 2019. His sole previous success was achieved on debut, as a juvenile, over 1400m on the straight track at Newbury after which he was campaigned in good company. Bachalard currently boasts a 50% strike rate for his main patron Sheikh Ahmed, doubling their seasonal haul after the victory of Shamikh at Jebel Ali on Friday while Curatolo, aboard that winner, is now on three for his debut UAE campaign.