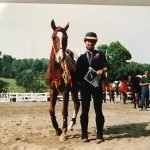 He understood the game of endurance and he loved every second of it  4 December 2018, California, USA ~ His registered name was LF Crystals Charm (Crystal Wind AHS x Autumn Splendor), and because of his steady ground-eating stride and his lets get down the trail attitude, they called him, The Big Red Machine. He…