"I’m in this sport now 11 years and this is my first World Championship and I’m so proud of it!" 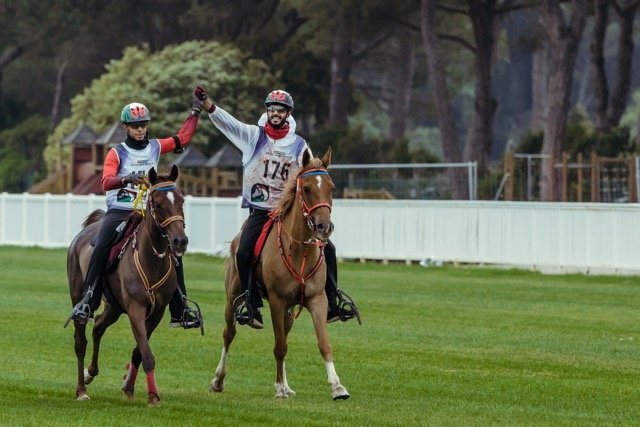 The defending champions from Spain claimed team gold once again at the Longines FEI Endurance World Championship 2021 at San Rossore in Pisa, Italy today where the UAE dominated the individual podium when clinching the top two places.

The was the first championship to run under the new FEI Endurance Rules, and history was made when Boni Viada de Vivero became the first Chilean rider to stand on a World Championship podium when scooping individual bronze, while Brazil also celebrated their first-ever medals when taking team silver ahead of France.

In a dramatic competition it seemed that the individual title looked set to also fall into Spanish hands when Omar Blanco Rodrigo and his brilliant grey, For Ferro, moved up from fifth to first after the second loop and stayed out in front until the closing stages. However the speed and supreme fitness of the UAE horses, Haleh who clinched gold for Salem Hamad Saeed Malhoof Al Kitbi, and Birmann Aya who slotted into silver medal spot for Mansour Saeed Mohd Al Faresi, saw them surge ahead in the final loop to finish neck-and-neck and hand-in-hand without a challenger in sight.

Haleh’s heart rate never went above 50 beats per minute and at the very end of the 160km test registered just 47. At the final vet-check the 10-year-old French-bred gelding looked completely unfazed as he nibbled some grass while the Australian-bred Birmann Aya, who has a tremendous record for speedy finishes, was also chilled with a heart-rate of 54.

Chile’s Viada de Vivero produced the most mature of rides, and the 27-year-old got a great reception from the Italian supporters as he is based in Italy. Lying 19th after the first loop he improved to 17th, 16th, 10th and then fifth before clinching third and bronze with the nine-year-old As Embrujo.

Al Kitbi was never far off the lead however, finishing the first two phases in third place, moving into second after loop three and staying there until the final push over the 20km sixth-phase course. In contrast Al Faresi, who is also 25 years old, was lying 13th after the first loop but improved to third by loop four and in the end only one-hundredth of a second separated him from his gold-medal-winning compatriot.

But the individual gold and silver medalists were the only two of the five-man UAE team to complete. A total of 12 countries contested the team title but just three finished, and it was a major battle for the medal placings. The strong side from Bahrain were big favorites, but HH Sheikh Nasser Bin Hamad Al Khalifa retired and his four running mates were all eliminated. The gold and silver medallists from Spain and Brazil each finished with just the essential three team-members while the bronze medalists from France completed with an impressive four.

And although the Spanish appeared to be running away with it at the outset, they were under intense pressure when their two main contenders were eliminated for metabolic issues for their horses. Jaume Punti Dachs and Alex Luque Moral claimed individual gold and silver along with team gold at the last World Championships in Samorin, Slovakia four years ago, but Luque Moral’s Eryvan was vetted-out after Phase 4 and the Punti Dachs’ JM Bucefala experienced the same fate after Phase 5 today.

So Blanco Rodrigo could take no chances with For Ferro over the last 20km, he must finish safely if his team was to stay in with a chance, and when he clinched individual sixth spot and Angel Soy Coll, another member of the victorious 2016 team, finished fourth with Warrens Hill Chayze that bolstered the Spanish effort.

It was desperately close however, because the third score posted by 2008 and 2010 individual gold medalist Maria Alvarez Ponton was critical and there was huge tension while her horse, Mandany, was closely examined at the final vet-check. But a big roar went up when he was passed, leaving her in individual 15th place and finalizing the total team time of 23:10:34 which left Spain in gold but just 3:01 ahead of Brazil in silver while the French posted 23:43:01 for the bronze.

For the new individual champion Al Kitbi it was a dream result.

“I’m in this sport now 11 years and this is my first World Championship and I’m so proud of it!”

The final loop was particularly tough. “Until the last five kilometres the rest were pushing and making it hard for us, and in the final vet-check I was so nervous I thought my heart might burst!”

For Chile’s Boni Viada de Vivero today was a day he will always remember. “I can hardly believe it! I knew I had a good horse but to have one that’s in the top-three in the world – now that is just incredible!”, he said.