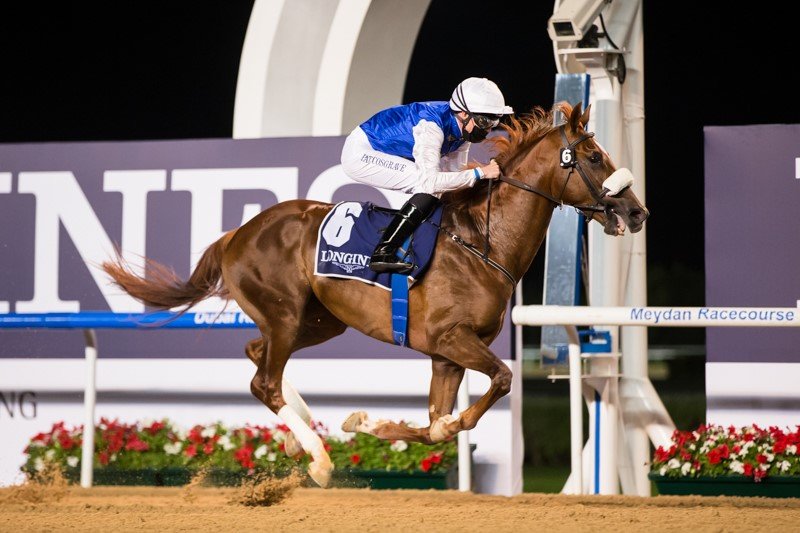 18 February 2021, Riyadh, Saudi Arabia ~ Ahead of the two days of the biggest races and prize money in the region, horses were lightly exercised. The $20 Million Saudi Cup and the $2 Million The Obaiya Arabian Classic will be held on Saturday, 20 February.

– French raider Deryan, regularly ridden by Clemence Guillemin, the daughter of trainer Didier Guillemin, came onto the dirt track on Thursday morning. “He is in good form. I just went for a canter around the track this morning. He has done all his work at home, so he doesn’t need anything special. I’m happy with him.”

– Fresh off a solid second over 1600m in the Group 1 Al Maktoum Challenge Round 1 for Purebred Arabians at Meydan, Fettah Du Loup has trained forwardly since arriving.
Trained by Sulaiman Al Ghunaimi, the Khalid Zaman charge jogged out with a pony on Saturday and had an easy hack around the dirt oval.

“The horse is going well and I think he is as good as the best horses,” Al Ghunaimi said.

“He needs a good pace in the race. He has one pace, but will come. Harry Bentley will ride him and he is a very good jockey. He needs good control and can come running.”

– Was lightly exercised on the training track.

“This morning Mashur went to the training track and did a very light exercise – he walked a lap and then cantered a lap, and then walked home. He was a little bit quiet, but I’m not too worried; he had a breeze yesterday, so it was a nice easy day today,” said trainer Phil Collington.

“He’s seven now, and I’d say in his second-to-last season, possibly. He’s very sound still and we’ll enjoy him while we’ve got him. Until recently he hadn’t run since last September in Baden-Baden, where he tweaked a ligament behind his knee.

“He came back from there lame and we gave him a long break, because he had had a long campaign up to that, and he’s just run the once since, a prep race at Mons in Belgium which he won easily. I’ve been really happy with him since and condition-wise he’s spot on. He feels back to his best.”

A disappointing ninth in the Jewel Crown in Abu Dhabi on turf in December, the USA-bred son of Baseq Al Khalediah was previously a winner in America before switching bases to the UAE.

“He shipped very well and he is getting better in his training,” said Alalawi. “There was a jockey error in his run at Abu Dhabi and I know he can run on turf or dirt, it’s just a matter of the ride.

“The race on Saturday will be tough,” he continued. “They have a lot of horses there and you never know how it’s going to go. You have to expect everything and Pat Cosgrave, our jockey, studies all the horses and the track. He will be ready.

“Our horse can lead, he can stay handy and he can get cover. Wherever you put him, he doesn’t mind. He’s the youngest in the race I think and has a bright future. When I got him, he wasn’t sound and we took care of him and he spent the summer with us, so we had time to make him ready.”

RB Frynchh Dude has won four of 11 starts and finished in the top four 10 times. His biggest victory came in the Al Maktoum Challenge Round 2 in Dubai. Trainer Al Alalawi is based at National Stables in Al Ain, UAE.

He continued: “I want to represent my country as a trainer, but at the same time, when you go to an international race, you have to have a really good horse.

“I think Frynchh Dude is that horse and any Arabian trainer would love to have this kind of horse. You can do what you want with him and he will give you a good effort. For me, if he’s well and has no problems leading to the race, I think he is going to be a very tough. He’s a record-breaker who’s young and sound.”