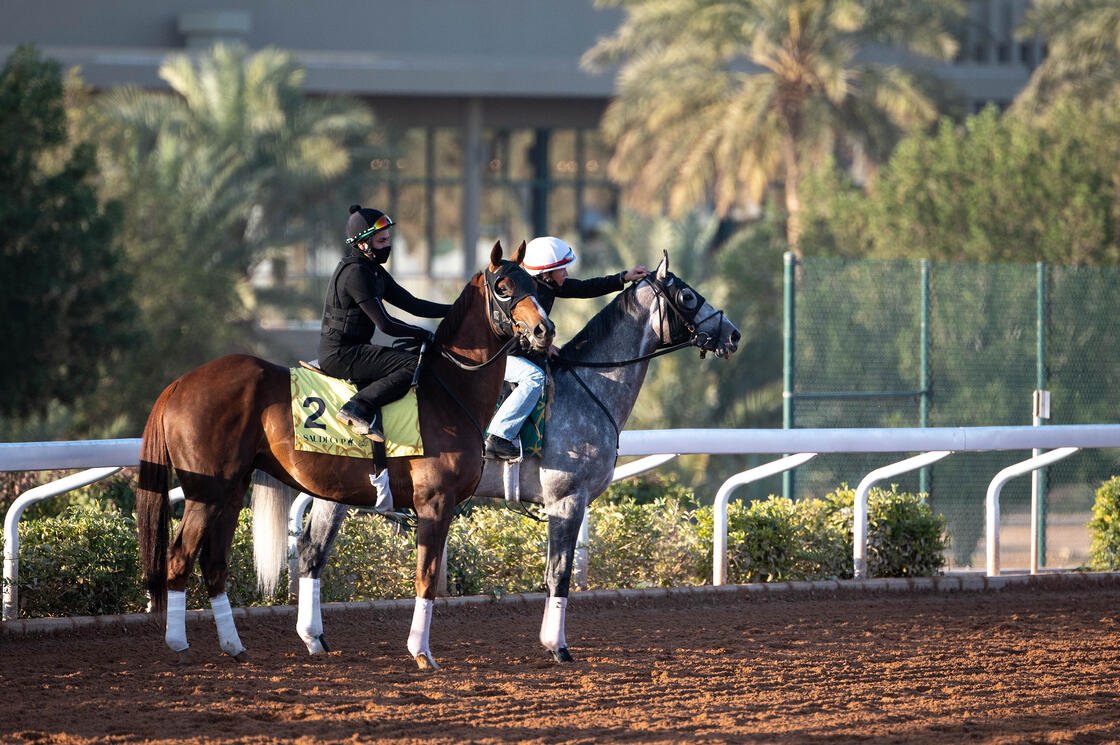 Saturday, the Saudi Cup day card carries a total prize purse of $30.5m and features dirt and turf races for the highest calibre of racehorses in the world. A full card of racing on the Friday before includes an International Jockeys Challenge which sees seven female and seven male jockeys compete as individuals as well as the $500,000 Saudi International Handicap for horses trained in IFHA-registered Part II and III racing countries. The following are comments on daily track work.

Charlatan (USA) – Bob Baffert’s Charlatan, one of the leading international contenders, had a planned walking day on Tuesday.

“He’s doing very good,” said Jim Barnes, Baffert’s long-time assistant who is overseeing the preparations for the 4-year-old Speightstown colt. “Tomorrow (Wednesday) we will jog on the training track. Thursday (it’s) back to the main track.”

Never beaten in four career starts, Charlatan comes here off an easy win in the Grade 1 Malibu at Santa Anita Park in California on December 26. Since the Malibu, Charlatan has posted a series of impressive drills at his California home base.

“He came out of his breeze very well today and just walked the shed row,” said Dustin Dugas, assistant trainer and exercise rider. “He jogged up the road really well this morning and is acting like he should. The breeze seems to have woken him up since being here and his coat looks great.”

Cox added: “We’ve had him a while now and he’s really always trained with a lot of energy and has been aggressive. I don’t know if I’m looking to see him progress as much as I am just looking for more of the same -he’s been that good.”

Max Player (USA) – The 4-year-old son of Honor Code walked in the quarantine area on Tuesday morning as the Steve Asmussen charge continued his preparation for Saturday’s race.

Sleepy Eyes Todd (USA) – Miguel Angel Silva, the trainer of American raider Sleepy Eyes Todd, said on Tuesday morning: “Yesterday the horse galloped one lap and then did a two minute mile on the dirt track.

“He nearly did three miles (4800m) yesterday on the track. He was on his own and it was José, my assistant, who rode him. Today he took the day off. He is in good form, he ate all of his dinner and everything is OK right now.”

Tacitus (USA) – The 5-year-old Tapit horse completed serious training with a sprightly 600m work on the dirt track on Tuesday morning under Neil Poznansky, assistant trainer for Bill Mott – who is remaining in the United States after having traveled here for the inaugural running last year.

“I thought today’s breeze was quite exceptional,” said Poznansky, a former jockey who won both the North American Eclipse Award and the Canadian Sovereign Award as Champion Apprentice jockey in 1996. “He continues to mature all the time and he is mentally more focused. He’s really coming into himself.”

Military Law (GB) – Nasir Askar’s gelding had an easy day of it on Tuesday at Meydan Racecourse in Dubai, navigating a lap around the dirt course with big-race jockey Antonio Fresu aboard.

“He just did an easy canter today,” said Maria Ritchie, assistant trainer to Musabbeh Al Mheiri. “He did a gallop (breeze) on Saturday and he’s had a couple easy days to freshen up. Musabbeh is coming tonight to meet the horse.”

Ritchie continued: “He’ll probably hand walk Wednesday, as I don’t think he’ll be able to go to the track yet. He’s done very well since his last run. We’ll probably canter on Thursday. Antonio will come in to ride him.”

Chuwa Wizard (JPN) – The 6-year-old horse, a winner of the Grade 1 Champions Cup which is a qualifying race for Saturday, had an easy piece of cantering for two laps to get the feeling of the dirt track.

“I am happy to see him this morning. He seems to have settled into the new surroundings here,” trainer Ryuji Okubo said. “He travelled to Dubai last year and that helped him a lot for a long trip to Saudi Arabia.”

“He was out on the track for the first time this morning, and we’re happy with him. He’s done a couple of rounds of the training track today and he seemed to handle it well and cope with everything,” said Andre Alencar, traveling head lad to Extra Elusive’s trainer Roger Charlton.

“We talked to the company who traveled him here and he travelled well; since he’s been here he’s been eating and drinking well. All good so far! Tomorrow we will go to the main track and have a spin around, and probably on Thursday we will have a little breeze with him.”

Bangkok (IRE) – Kept busy during the last few weeks, Andrew Balding’s British challenger was in winning action only a few days ago when landing the Winter Derby Trial over 2000m at Lingfield.

The 5-year-old was restricted to the training track for his exercise. “He just went for a canter,” Balding’s wife and assistant Anna Lisa said. “He came here fit and seems very well. He might do something a bit quicker on Thursday but it’s all systems go.”

Mishriff (IRE) and Global Giant (GB), both trained by Britain’s champion trainer John Gosden, had their first outing on the track on Tuesday morning ahead. The pair completed a steady canter on the dirt.

Thady Gosden, who is assistant trainer to his father, said: “They travelled over really well and had a lead-out day and a trot yesterday. They arrived in the early hours of Sunday morning so have had some time to acclimatise. There’s a bit of a change in the weather from Newmarket to here but I’m sure they are happy to be here in the warmth.”

The 4-year-old Mishriff, who was bred by his owner Prince A A Faisal, is no stranger to the track having run second in last year’s Saudi Derby. On his return to Britain he won the Listed Newmarket Stakes before going on to Classic glory in the Prix du Jockey Club at Chantilly.

Thady Gosden continued: “It was bottomless ground on Champions Day for Mishriff’s final run of last year but he had a little break and has been training well since he started back. He’s in good form.

“He knows his way around here a bit and he handles the dirt well. It’s a brilliant track here – obviously Mishriff is a turf horse but he handles it well. It’s wonderful for Prince Faisal to have a runner in The Saudi Cup. He puts a huge amount into the sport and takes a lot of time over his horses and cares about them deeply.

“He’s very passionate and it’s brilliant for him to have a horse who is a Classic winner and is now coming back to his home country to hopefully run well in the big race.”

He added of 6-year-old Global Giant, a dual Listed winner who was last seen in public finishing second to fellow Saudi Cup contender Simsir in the Bahrain Trophy: “He went over to Bahrain and ran very well there. The race didn’t quite go to plan as he broke a little but slowly and was finishing well late on but wasn’t quite able to peg back the leader. He’s in good form too. He had a little break over the winter but seems very well in himself.”

Simsir (IRE) – Simsir’s trainer Fawzi Nass, who is based in Bahrain, but also has satellite yard in Dubai, said: “Simsir arrived last night. This morning we took him out for a trot on the small track next to the quarantine. He is in good form. I think he traveled well, he ate up his food last night, so all is good.”

“He arrived here on Sunday morning, about 3am,” trainer Phil Collington said. “The flight was good and he traveled well and was very settled. On Monday he just walked, and today he’s been out on to the training track.

He trotted a lap and then cantered two laps, and felt very well. Tomorrow he will go back to the training track for a canter before going to the main track for a breeze. Thursday and Friday he’ll just canter.”

The $2m Obaiya Arabian Classic will be run with Listed status on Saudi Cup Day after receiving an upgrade from the International Federation of Arabian Horse Racing this week.

The 2000m dirt contest, which saw a prize money increase from $1.9m to $2m following its inaugural running, is the world’s richest race for Purebred Arabians and is staged as part of a $30.5m eight-race card on Saudi Cup day, February 20, 2021.

Organized by the Jockey Club of Saudi Arabia and run at the King Abdulaziz Racetrack in Riyadh, Saudi Arabia, The Saudi Cup is a two-day festival of international racing headlined by the USD$20m Saudi Cup – the world’s most valuable race. Due to the effects of Covid-19, The Saudi Cup 2021 is an invite-only event held behind closed doors and observing strict covid-19 safety protocols.