Ahead of the $1 Million Kahayla Classic on 26 March 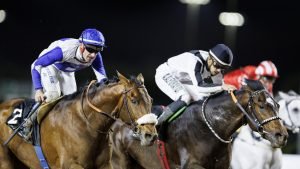 Deryan (Mahabb x Haboob by Akbar), owned by Yas Horse Racing Management is rated at 122. The seven-year-old will be backed by Ioritz Mendizabal, the jockey that rode him to victory in this race in 2021.

Trainer Didier Guillemin said of him. (Deryan) “He is very happy on this track. The surface was a bit deep for him last time in Riyadh but he still ran well to be fourth. He won this race last year and I feel he is in the same form again. He has drawn wide in 16, that is the only negative, so he will be ridden with patience.”

Thomas Fourcy, trainer of Hadi De Carrere, said: “All going well with him. He has come from his win in Saudi well. Good gate in two also. We are content.”

Also a formidable challenge will be from multiple Grade winner, six-year-old, RB Rich Lyke Me (Majd Al Arab x Rich Frynd (US) by TH Richie) rated at 123. Trained by the team of F Nass and ridden by Adrie de Vries, he has only four races on GCC soil.

The five-year-old First Class (Dahess x Topoftheclass by Genuine Monarch), rated 121, is fresh off his February win of the Saudi Listed $1 Million Al Mneefah Cup and doing well under veteran trainer Alban De Mieulle. He seems to like the distance and Ronan Thomas will again be at the helm starting out of gate 3.