Can horses fly? Well yes, they can if they’re Olympic athletes! 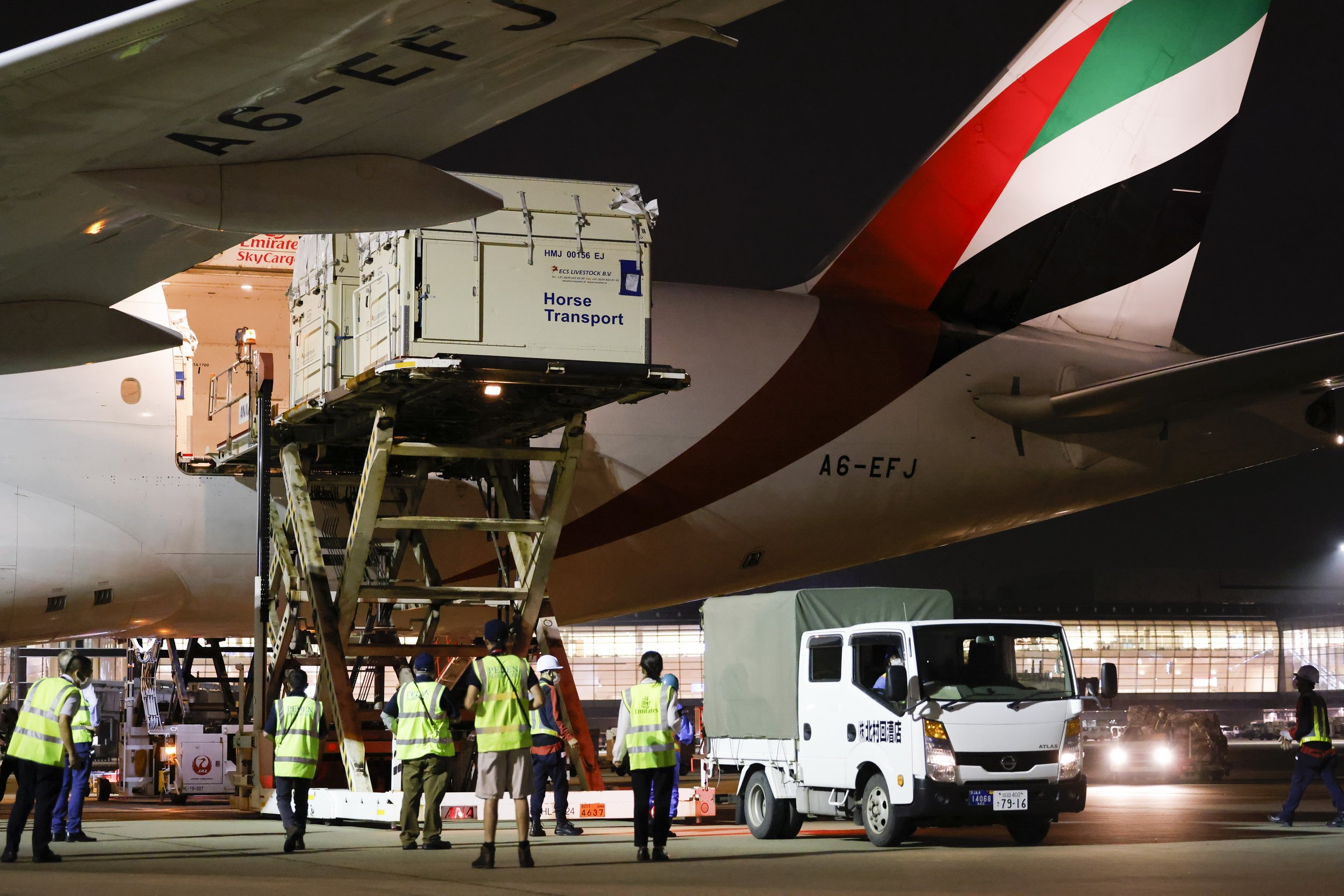 15 July 2021, Tokyo (JPN), And in a piece of history-making, 36 of them flew into Japan last night – the first full cargo load of horses ever to land in Haneda, the waterfront airport that serves the greater Tokyo area and which is now welcoming a very different group of Olympic athletes.

“To see these horses arriving at Haneda airport is a truly historic occasion, and what makes it even more special is that these are not simply horses, they are Olympic horses”, Administrator of Tokyo International Airport Takahashi Koji said. “It’s a really big night for the airport, and particularly for the cargo team, and we see it as one of the major milestones of the final countdown to the Tokyo 2020 Olympic Games.”

These four-legged time travelers are all Equestrian Dressage horses and include some Olympic superstars, among them Bella Rose, the mare ridden by Germany’s Isabell Werth, the most decorated Olympic equestrian athlete of all time.

Also landing at Haneda en route to the stunning equestrian venue at Baji Koen, owned by the Japan Racing Association, is Gio, the ride of double Olympic champion Charlotte Dujardin (GBR), who will be bidding for a three-in-a-row title in Tokyo.

The 36 equine passengers will be flying the flag for teams from Austria, Belgium, Denmark, Germany, Great Britain, Netherlands, Portugal and host nation Japan, as well as individuals from Brazil, Estonia, Finland, Ireland and Morocco. And they will be joined by a further group of Equestrian Dressage stars flying into Tokyo tomorrow.

The first Olympic flight out of Europe saw the horses traveling from Liege in Belgium, where there’s even a special airport horse hotel, flying on an Emirates SkyCargo Boeing 777-F to Dubai, a 90-minute refuel and crew change and then on to Tokyo.

From a sustainability perspective, Emirates has implemented a number of initiatives to improve fuel efficiency and reduce emissions where operationally feasible, including its long-standing operation of flexible routings in partnership with air navigation service providers to create the most efficient flight plan for each flight. The airline, which operates one of the world’s youngest aircraft fleets, also uses advanced data analytics, machine learning and AI in its fuel monitoring and aircraft weight management programs.

Like human passengers, all horses travel with a passport. They will already have undergone a 60-day health surveillance period prior to a seven-day pre-export quarantine. They all also have an export health certificate and are thoroughly checked over by veterinarians prior to boarding.

The horses fly two per pallet, or flying stable, which is the equivalent of business class. Their comfort and safety is ensured by flying grooms and an on-board veterinarian. And, unlike two-legged passengers, the horses not only get their in-flight meals (including special meal requests of course), but are able to snack throughout the trip, on hay or haylage, except when they are taking a nap.

So as they are flying business class, does that mean the horses get flat beds to sleep in? Although horses might occasionally indulge in a spot of lying down to snooze in the sun at home, they actually sleep standing up. They have something called the “stay apparatus”, which allows tendons and ligaments to effectively lock the knees and hocks (in the hind legs) so that they don’t fall over while they’re dozing off. So there’s no need for flat beds on the flight.

A total of 325 horses will be flown into Tokyo across the two Games and the complex logistics for this massive airlift have been coordinated by transport agents, Peden Bloodstock, which has been in charge of Olympic and Paralympic horse transport since Rome 1960 and is the Official Equine Logistics Partner of the Fédération Equestre Internationale (FEI), global governing body for equestrian sport. Peden Bloodstock became title partner of the FEI Best Athlete Award in 2019.

A convoy of 11 state-of-the-art air-conditioned horse trucks, owned by the Japanese Racing Association, transported today’s precious equine cargo – and 13,500 kilograms of equipment – on the final transfer from Haneda to Baji Koen where the equine superstars had the chance to settle into their Olympic Athlete Village, aka the stables.

“Like all the athletes arriving into Tokyo for the Olympic and Paralympic Games, the horses are honed and ready to compete on the sporting world’s biggest stage”, FEI President Ingmar De Vos said. “After all the challenges the world has faced, finally we’re almost there and now it’s only a matter of days before we hear those magical words, let the Games begin!”

Total transport trivia across both Games

Haneda Airport handled over 87 million passengers in 2018, making it the third busiest airport in Asia and the fourth busiest in the world, after Atlanta, Beijing and Dubai. Following expansion in 2018, Haneda is able to handle 90 million passengers per year – not counting horses!

With Haneda and Narita combined, Tokyo has the third-busiest city airport system in the world, after London and New York City.

A record number of countries – 50 – will be competing in the equestrian events at the Tokyo 2020 Olympic Games following the introduction of new formats that limit teams to three members, meaning that more countries will have the opportunity to compete on the Olympic stage than ever before.

A total of seven countries will be fielding full teams in all three Olympic disciplines, including the host nation Japan. The others are Australia, France, Germany, Great Britain, Sweden and United States of America.

Equestrian is the only sport in the Olympic movement in which men and women compete head to head throughout the Games, making it a totally gender neutral sport. And the FEI doesn’t need a policy regarding transgender athletes as there are no requirements for our athletes to state their gender in order to participate in FEI competitions, or at the Olympic and Paralympic Games.

Equestrian is not a gender-affected sport that relies on the physical strength, stamina and physique of an athlete as there are no gender based biological advantages. Success in equestrian is largely determined by the unique bond between horse and athlete and refined communication with the horse.

Sustainability is a key theme across the Games, and equestrian is very much a part of that. In line with Pillar 1 of the IOC Sustainability Strategy: Minimum Environmental Burden, the redevelopment of the Japan Racing Association-owned Baji Koen Park as the equestrian venue for Tokyo 2020 has minimised environmental impact and ensured the legacy of the venue used for the Tokyo Games in 1964.

“The original plan for equestrian put forward by the Tokyo Organising Committee was for a totally temporary venue in the Tokyo Bay area, but when the FEI was consulted on this as an option, we pushed for the alternative which was to re-use the 1964 Olympic equestrian venue at Baji Koen,” FEI Secretary General Sabrina Ibáñez says. “This was the optimal choice from a sustainability perspective as it minimises environmental impact, but it also ensures the legacy of this wonderful venue.”

The Tokyo Organising Committee of the Olympic & Paralympic Games (TOCOG) has incorporated a further sustainability initiative into the equestrian venue with the incineration of used bedding from the horses’ stables for power generation.

And aligned with Pillar 2 of the IOC Sustainability Strategy: Urban environment plans harmonising with nature, only native species that integrate well with local flora and fauna have been planted at the Sea Forest cross country venue. This includes the use of a native grass species, Zoysia japonica, for the footing on the course itself.

Olympic equestrian involves three disciplines, with a quota of 200 starters in total: