15 October 2020, UK ~ The Arabian Racing Organisation (ARO) welcomes Zayin Arabian Stud as lead sponsor of the zayinarabianstud.co.uk (0-65) handicap, to be run at Wolverhampton on Saturday, 17 October 2020. The one-mile contest, supported by Emirates Breeders, has attracted 17 entries, with a full field of 13 left after declarations of 15 October.

Entries include Popsstar and Zayin Zachilles, both former winners of the seven furlong (0-75) Handicap at Dubai International Arabian Races, the most coveted handicap for the smaller owner-breeders in UK Arabian racing. Both horses are capable of either winning or making the frame on their seasonal reappearances, whilst Zayin Zachilles is also a course winner. Zayin Zachilles is joined by his younger half-brother Zayin Zyperion, only just starting his career. The field may have most to fear from another young contender in Al-Tabari, also trained as are the Zayin pair by Peter Hammersley, whose wife Michelle also owns the new comer. Hammersley has a further two runners, Bin Al Reeh in first-time blinkers and the well-bred Jomanah Athbah makgin her seasonal reappearance. 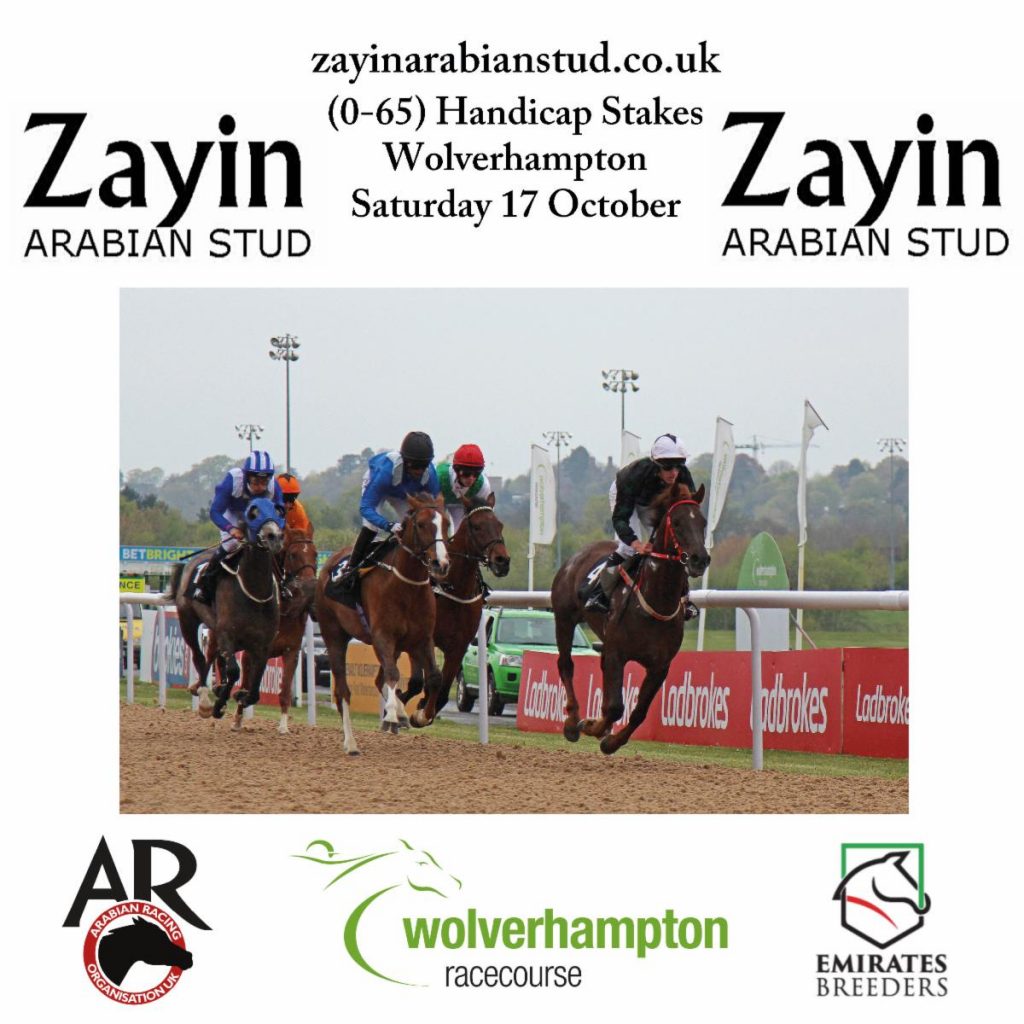 Sue Connally’s Samawaat was a distance winner for previous connections, but renews the winning partnership with former ARO leading novice jockey Charlie Price, who has progressed from the amateur ranks to further success under rules as a conditional jockey. Heading the handicap is Mustafeed for ARO Patron HH Sheikh Hamdan Al Maktoum.

Zayin Arabian Stud’s proprietor Paul Simmons commented: “I’m delighted to support UK Arabian racing and ARO by sponsoring this race. It is particularly important to me to support the grass roots of the sport, and I was delighted to see such a strong field of entries. I look forward to watching this competitive race and welcoming in a worthy winner.”

Genny Haynes, ARO Commercial and Finance Director said: “ARO is thrilled to renew their association with Zayin Arabian Stud who have been supporting UK Arabian racing with their homebred runners for many years.

“It is vital during these challenging times that our sport continues to maintain its’ presence as part of the UK racing scene at all levels and we are very grateful to all our sponsors in 2020.