Sharkh maintains win over Will Power 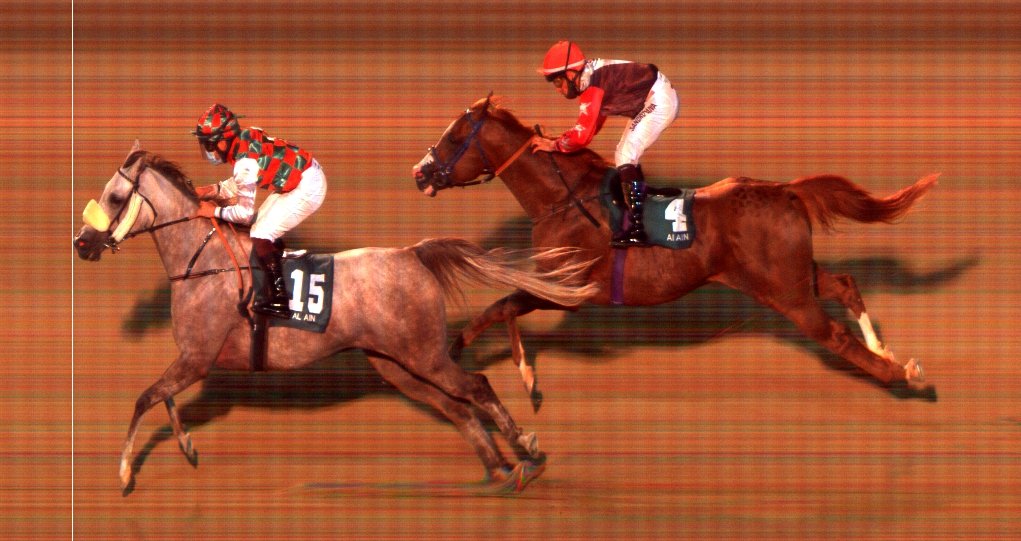 Jara was content to settle his mount, quite wide, in a share of third and fourth, but was always in a good position to make a telling challenge in the race of 15 runners. At the turn for home, AF Ramz was in front before Mujahid took over, then was in the line of Dagui Lotois and Salb. As the 200m pole approached, Jara ‘pressed go’ and his mount darted to the front, running on strongly to land the spoils from Mujahid with Onward staying on from the back to snatch third. Win time was 02:03:58. Homebred, the 5-year-old mare (Sarrab (FR) x Fazzaha (FR) by Dahman El Arami (FR)) was winning for a third time, having arrived locally with one success to her name in her native France. She added a win in February, over this 1800m Al Ain course and distance when trained by Ana Mendez. It was her second appearance for Al Jahoori, the first, 16 days ago, resulting in a fourth over an inadequate 1000m, also at Al Ain.

Al Jahoori said: “She ran well over a short trip two weeks ago and we knew this extra distance would suit her. She had a nice low weight and we were quite hopeful.”

Seven went to post for the opening 1600m maiden, restricted to 3-year-olds foaled in the UAE and in private ownership, but only two were ever really involved with Tadhg O’Shea attempting to lead from the outset on AF Istintaq but his mount had no answer when challenged by debutant Samau Xmnsor (Jibril (FR) x Tres Yac (FR) by AL SAKBE (FR)), about 275m from home. Having stalked O’Shea, whose mount had the advantage of one previous outing, Omani apprentice Abdul Aziz Al Belushi drove his mount to the front and found a willing partner, always seemingly in control once in front, the jockey opening his account for the season in the process.

Trainer Ibrahim Al Hadhrami, opening his tally for the new campaign, said: “We are very pleased with that. We hoped he would run well, but to win on debut is great and the first two were a long way clear, so hopefully, it will prove a good performance.”

The following 1600m maiden was turned into a procession by dirt debutant Ottoman (VALIANT BOY (FR) x Caviyar (US) by Calin De Louve (FR)) as the rest of the field of 14 may as well have stayed at home in their stables. Directed by Szczepan Mazur, once he hit the front at the top of the long straight, he kept the power going and pulled ahead by ten lengths. Saddled by Abdallah Al Hammadi for his main patron, Al Ajban Stables, the 3-year-old had made his one previous start last Sunday when fifth over 1400m on the Abu Dhabi turf. The extra 200m and switch to dirt, allied with that experience, clearly suited.

Al Hammadi said: “We were pleased with his debut last week and that was very impressive, so we have to be delighted because he is only a young horse who, hopefully, can improve.”

Owner and trainer were then denied a quick double when their Will Power just failed to reel in Sharkh (MAJD AL ARAB (GB) x Siheme (FR) by Dormane (FR))in the following 1800m maiden, the latter clinging on grimly for Pat Cosgrave, sporting the predominantly red silks of Abu Dhabi Racing. Trained locally by Helal Al Alawi from his base at The National Stables, the 4-year-old was making it third time lucky on his local and dirt debut having raced twice in his native France, narrowly beaten when third on debut and again when fourth as recently as August. Never far off the pace, Cosgrave set sail for home fully 600m out, looking set for a comfortable success until Bernardo Pinheiro conjured a late lunge from Will Power, one which only just failed.

Al Alawi said: “The horse only made his debut in June and is still learning his job. We think he is a nice new horse in the yard and we now know this surface suits him so it opens up options.”

Pinheiro may have been out of luck on that occasion, but was able to complete a brace for Al Ajban Stables and Al Hammadi when Maaly Al Reef (Bibi De Carrere (FR) x Matheela (AE) by Tibet (RU)) prevailed in a thrilling finish to the 2000m handicap. The gallant AF Al Baher led for about the first 1850m only to be headed by Pinheiro’s mount, but refused to lie down under Tadhg O’Shea, regaining the initiative in the centre of eventual winner and his stablemate Opera, one of three saddled by Al Hamamdi. Maaly Al Reef reclaimed the lead about 50m out, staying on to land the spoils from AF Al Baher with Opera in third, the trio separated by a neck and short-head.

It was a third career, second on dirt, success for the 6-year-old entire and Pinheiro said: “He is a good little horse who was second last time and we only had 53kgs today, so was receiving a lot of weight from the runner-up which we took advantage of with a battling display.”

The maximum allowed of 15 contested the 1000m maiden, but almost from the second the stalls opened the race developed into a duel with Fabrice Veron and Jinjal being stalked by Sandro Paiva aboard AF Lewaa. The latter probably pulled level with about 300m remaining, but after the protagonists bumped entering the final 175m, Veron’s mount always had the upper hand, finally winning relatively comfortably.

Trained by Ahmed Al Shemaili for Hassan Saleh Al Hammadi, who used to train the 6-year-old entire, Jinjal (AF ALBAHAR (AE) x Fantasia CS (US) by Bandjo De Falgas (FR)) was making his initial outing for his new trainer a winning one and shedding his maiden status at the fifth attempt, just second on dirt. His best previous effort was over 1400m on the Abu Dhabi turf when he led throughout only to be denied right on the line.

Al Shemaili said: “He has lots of natural speed and has led in most of his races over further, so we hoped this first try at 1000m would suit him and it appears it has.”

Champion Owner Khalid Khalifa Al Nabooda and his main trainer, Ernst Oertel, rarely leave the ‘Garden City’ empty handed, but were forced to wait until the finale, a 1000m handicap, to get on the scoresheet. Partnered by the owner’s retained rider, UAE champion Jockey Tadgh O’Shea, AF Sail (AF ALBAHAR (AE) x Maftoona (GB) by Fadjik (GB)) was soon in front and was probably never headed, following up on his 1200m maiden success at Sharjah on his seasonal return on the last day of October. That was just a third career start for the homebred 4-year-old who has now won half of his four racecourse appearances.

Oertel said: “He is a good horse and we were very hopeful coming here that the drop to 1000m would suit him and it clearly has.

“He was second here, over 1400m, on his debut last year, so we knew the surface was was not an issue. We will keep him to sprint trips now though.”